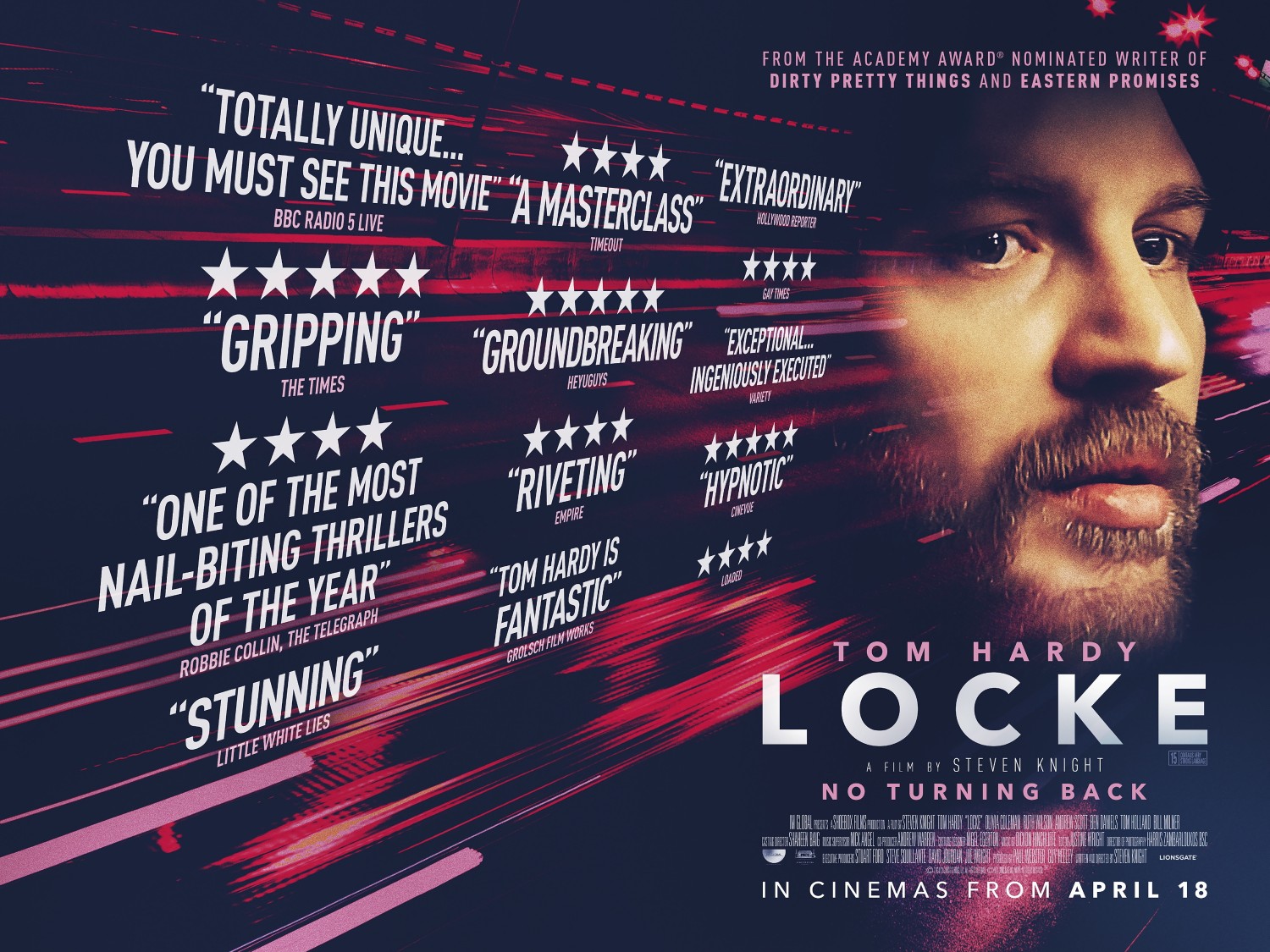 This is that film where a plausibly middle-aged Tom Hardy drives from Birmingham to London in a Welsh accent. Not a bad Welsh accent – I was reminded of Rob Brydon, who also did a thing set entirely in a vehicle, Marion And Geoff. That was a poignant comedy of failure. Hardy’s (brilliantly realised) Ivan Locke is similiarly beset by disaster, but this is no comedy and Locke is no victim of circumstances – at least, he is trying not to be as he rushes to the bedside of his ‘mistress’ (Olivia Colman) who he only slept with once in a moment of weakness, but who is now about to have his baby. He is also deserting his employer on the eve of the biggest gig of his career as a construction manager, and betraying his wife and family. But, as he keeps telling his dead father in the back seat, he is determined to make things right.

Of course his dead father isn’t in the back seat really – this is a figment of his imagination. Which doesn’t mean that this is an account of a man breaking down under stress. Neither is it an absurdist Beckettian drama about a man alone being assailed by mysterious voices, although there’s a sense in which the stage is set for just that: we never leave the confines of the car and voices (wife, mistress, son, boss, colleague) are constantly haranguing Locke over the phone. But when Olivia Colman’s character makes a reference to Waiting For Godot, she hastily retracts it, recalling that Locke is ‘not a theatre person’. For ‘theatre’, read arthouse cinema. This looks like its going to be an art film but Ivan Locke is struggling to keep his head above water in the mainstream. The tension between the two results in my ability to see this film in either the Curzon Soho (where I am) or the Odeon Covent Garden just down the road.

Mind you, that’s quite an arty Odeon.

Ivan Locke has nothing to do with arty stuff. He’s all about concrete, usefully employed. To see this film is to learn more about the complexities of laying foundations than you ever expected to want to know. But you do want to know – writer-director Steven Knight’s finely-tuned script generates real tension over whether Locke’s 55-storey building will go up and stay up. It isn’t just a symbol. Though it is also, yes, a symbol – of Locke’s maintaining control over his life. His boss bemoans his dereliction of duty and his wife chides him for putting his work before his family, but there’s a sense in which it almost doesn’t matter if he loses his job and his family, as long as that building stands.

The same is true of the child he has sired. He is determined to stand by it as his feckless father never stood by him, and so it too becomes in part a symbol – an idea of Duty. Its mother is someone for whom Locke seems to have no love or even much fondness, only a kind of pity – she is ‘fragile’, and so he sees her as a project: she needs shoring up, reinforcing, so that the child will start out with solid foundations.

Through his efforts the symbols – building, child – will be made real.

So, tempting as it is to see Locke as a hero courageously taking responsibility for his actions, it is also possible to see him as overly fixated on abstractions – an artist in spite of himself. Though it allows for few directorial flourishes, the car interior is the perfect setting for the tension between these two ideas to play out: an enclosed private space wherein ‘the real world’ and the abstract are on the same level. And where the SatNav presents Locke with another matter-of-fact but still resonant symbol of his plight – a road endlessly leading him into an as-yet-uncreated void.

PS: It is likely that Steven Knight conceived this as a one-off. Still, this was a successful film made on a very low budget, and there will probably be economic pressure to come up with a sequel or two. Indeed, given the nature of global capitalism, these sequels are, perhaps, inevitable. A rough outline of each is given below.

Locke 2: The Return – essentially, a reversal of the original journey: Locke arrives at the hospital, thinks fuck this, goes back to Birmingham.

Locke 3: Judgement Day – its a few years down the line and Locke’s 55-storey building, now completed, is subject to a terrorist attack. Locke, hastening to the scene, listens to events unfold on the car radio, his alarm exacerbated by the fact that everybody he knows and loves is in that building, for reasons which, when fully explained, will be utterly believable.

Locke 4: Armed And Dangerous – Locke sets out to take revenge for the attack from 3. Tension is maintained through his dialogue over the phone with the leader of the terrorists, chillingly voiced by Jean-Claude Van Damme. (Locke himself is now played by Jason Statham.)