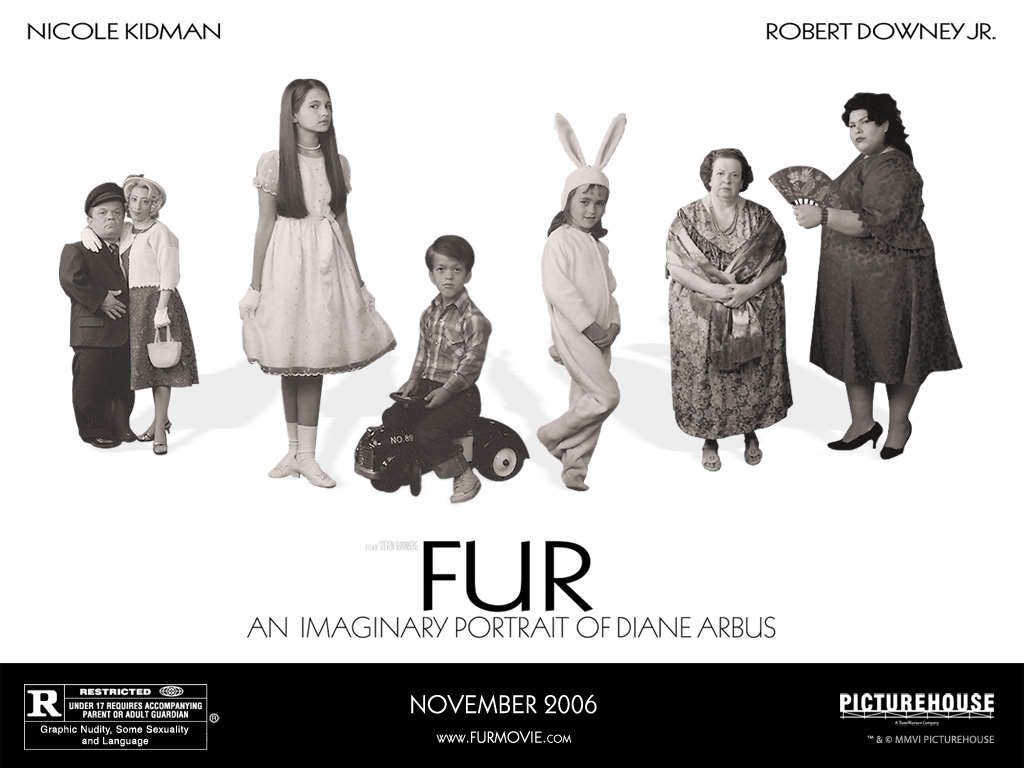 Who the hell’s Diane Arbus? If this is your reaction to the above title, then you probably won’t get much out of this film. I knew little about Diane Arbus, and having seen the film, now feel that I know less. Which is not the film’s fault. It begins with a disclaimer (in twee fairy-tale script) stating that this is not a 100% accurate account of her early life, but rather goes ‘beyond reality’ to find the essence of her.

So I suppose I can now state with conviction that Arbus, in 1953, did not have an affair with a man who looked like Chewbacca. This man was not called Lionel and did not live in the apartment above hers and did not introduce her to all his circus-freak friends. Rather, all this is a metaphor for how she turned from struggling to fit in as a conventional housewife (despite being what she describes as ‘strange’) into the famous photographer many of us have heard of today.

It all begins quite promisingly, after a flash-forward prologue at a nudist camp, with Nicole Kidman’s Arbus trying to keep it together as supportive wife and assistant to her fashion photographer husband (Ty Burrell), but increasingly intrigued by glimpses of the masked stranger upstairs (Robert Downey Jr.). When, after discovering clumps of hair – and an ornate key – in her waste pipe, she eventually makes contact (it is clear that he has been expecting her) he turns out to be entirely covered with hair. This might make him Beast to Kidman’s Beauty – his ornately decorated lair suggests as much – but ostensibly it is due to a disease called ‘hypertrichosis’, which has made him a big hit in freak shows in the past, though he now makes wigs for corpses and living people alike. Weird enough for you?

Well, no actually. This is presumably about a woman accommodating herself to her own ‘strangeness’ – or genius – but it is all too polite. The opening disclaimer (itself a bad sign) has promised a film that will go ‘beyond reality’ but I found myself wishing that it had gone further. Downey should have been an actual growling, drooling werewolf. The most bizarre thing that happens here is that Arbus installs a trapdoor in the ceiling with steps, so that the freaks can all troop down into her apartment. This is one of those films where I kept wondering if it might have worked better as, say, a gross-out comedy. Or science fiction. Or porn.

By the end I’m afraid my sympathies were all with Arbus’ long-suffering husband. When he accuses her during a row of cutting a hole in his ceiling to let freaks come in, he sounds like a paranoid schizophrenic, but perhaps this is Arbus’ achievement – she has offloaded all the more disagreeable aspects of her ‘strangeness’ onto her husband, leaving her free to swan around in a little bubble of artistic eccentricity. It speaks volumes about her preciousness that she has to shave Downey before she’ll have sex with him. That done, she watches him swim out into the ocean, never to return. He has a terminal illness (‘My lungs are disintegrating.’) but since this is all ‘imaginary’ I found it hard to care. After his death, Lionel leaves Arbus a photo album with lots of blank spaces awaiting her great work. Yes, it’s that obvious. Then she leaves her husband and children on a final journey into, I suppose, the depths of her own psyche. Or, as some may see it, arse.

At the end we are back in the nudist camp, where a naked Arbus is taking photos. She sits down on a bench next to another naked young woman and asking her to tell her a secret. Oh, says the audience, nodding wisely, she was a lesbian. That explains it.

I have no idea whether Arbus was a lesbian or not – yes I could look it up but one should never undervalue the power of ignorance in these days of instant answers – and does it matter anyway? All credit to director Steven Shainberg and screenwriter Erin Cressida Wilson for attempting something different here but I wonder what this film has managed to communicate about Arbus that they couldn’t say in a straightforward way – that she was really irritating? Though it looks good and all the performers perform well this struck me as a rather maudlin, over-respectful and unmagical fairy tale whose approach might have better suited An Imaginary Portrait of Anne Geddes.