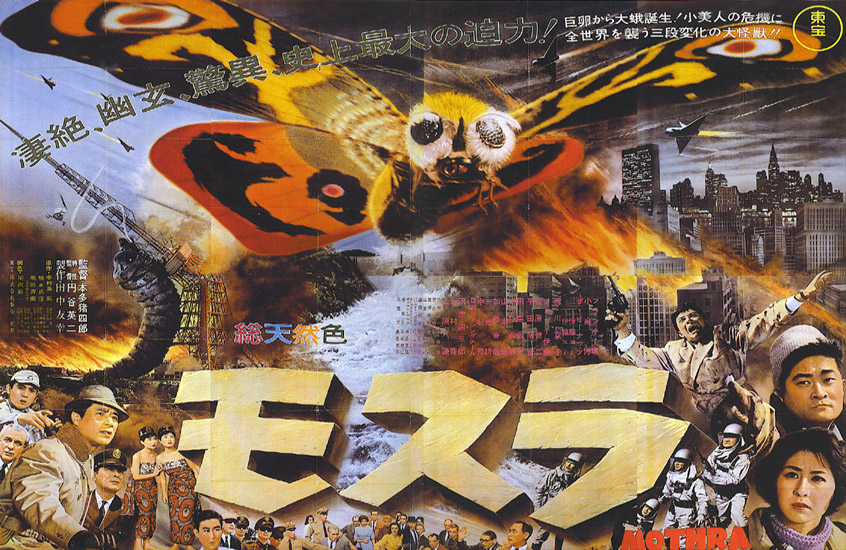 After a self-imposed double-bill of Camille Claudel 1915 and Miss Violence at the Curzon Soho, what better way to cool off than with a showing of Mothra, at the Prince Charles off Leicester Square? So I reasoned. And it only cost a pound, if you were a member. I was. I am.

Now last year I saw King Kong Vs. Godzilla there and was happy to laugh along with everyone. But Mothra is different. Mothra has a dignity that its more boisterous Toho stablemates like Godzilla do not quite have, destroying buildings with a mere nonchalant flapping of its wings, almost as an afterthought.

I am prepared to accept that an afternoon of watching Juliette Binoche incarcerated in an asylum and a Greek father pimping out his pre-teen daughter had not put me in the most receptive mood for this film. But to me the laughter that greeted Mothra right from the off struck me as inappropriate, as if the audience had simply decided that the film was funny beforehand and was determined to get its money’s worth. This should not have taken long, assuming that most of them had memberships, but it went on and on, riding roughshod over any distinction between intentional and unintentional humour, only ceasing for a couple of scenes in which it was seemingly overwhelmed by a sense of the film’s sheer strangeness.

But, encouraged by the usual things – bad dubbing and poor effects – it resumed. And yet the dubbing wasn’t that bad, and the effects made up in charm what they may have lacked in sophistication. There is a scene showing Mothra, still in caterpillar form, ploughing through the ocean towards Japan, and the sky behind the giant creature – pale blue with white clouds – is very clearly painted on a flat surface, and you can even see a little blob of dried blue paint there.

I found that blob of paint strangely poignant. But the audience was not susceptible to such subtleties. They carried on laughing (I was tempted to call this account Mothra Vs. The Audience) and instead it was the film that fell silent.

Every five (or so) minutes the sound cut out for a minute (or so). This continued until pretty much the end of the film. It is through such errors the Prince Charles maintains its reputation as a ‘grindhouse’ cinema (I remember a showing of Miike Takashi’s Gozu there which was interrupted by a significant chunk of Christopher Smith’s Creep, leaving the audience wondering if this was just another example of the Japanese director’s legendary perversity.)

I was tempted to storm showily out to demand my pound back. But I just sat there absorbing the experience. I don’t think the silences seriously impacted on my comprehension of the film (which in any case often made its points by erupting in a flurry of untranslated Japanese newspaper headlines).

Here is what happens: a team of scientists investigating a radioactive island find a strange tribe of blacked-up locals and some curious flora and fauna. While being strangled by a ‘vampire plant’ the lead scientist (Hiroshi Koizumi) glimpses a couple of foot-high twin girls – in a dreamlike scene (the audience fell silent for this) which prefigures the weirdness of director Inishoro Honda’s subsequent Matango: Fungus of Terror – aka (don’t laugh) Attack of the Mushroom People. The twin girls are are later removed from the island by businessman ‘Clark Nelson’ (Jerry Ito) who puts them onstage in Tokyo.

Their show is wildly successful, in spite of the fact that the crowds would have been hard-pressed to see the little mites – fortunately, however, they can sing. Though taken from their island home against their own will the girls (who are telepathic, by the way) remain sanguine about their plight, confident of being rescued by Mothra who is indeed on his or her way.

The real villain is the businessman of course, not Mothra. He and his cronies (one of whom is played by Tetsu Nakamura, the mad scientist from The Manster) underline the point by chuckling evilly and at some length at their own nefariousness. The film feels like a warning against messing with Nature – although if so, it’s a strange kind of Nature. Radiation-assisted Nature perhaps – but radiation alone seems insufficient to account for diminutive singing telepaths and a giant moth who is more god than monster. Oh well. Mothra would be less fun if it made sense, but although it certainly is absurd, I wouldn’t call it a laugh-out-loud movie. A quiet smile seems more appropriate – however, this audience would clearly disagree.

Not Mothra Vs. The Audience then so much as The Audience Vs. Me. Or perhaps all I can glean from this experience is that Camille Claudel 1915, Miss Violence and Mothra do not make a good triple-bill. Maybe Rodan would have worked better.*

*An obscure joke exploiting a confusion between Pierre August Rodin (whose mistress Camille Claudel was) and Rodan, an enormous pterodactyl who destroys Tokyo in another Inoshiro Honda monster movie. Now you can laugh.