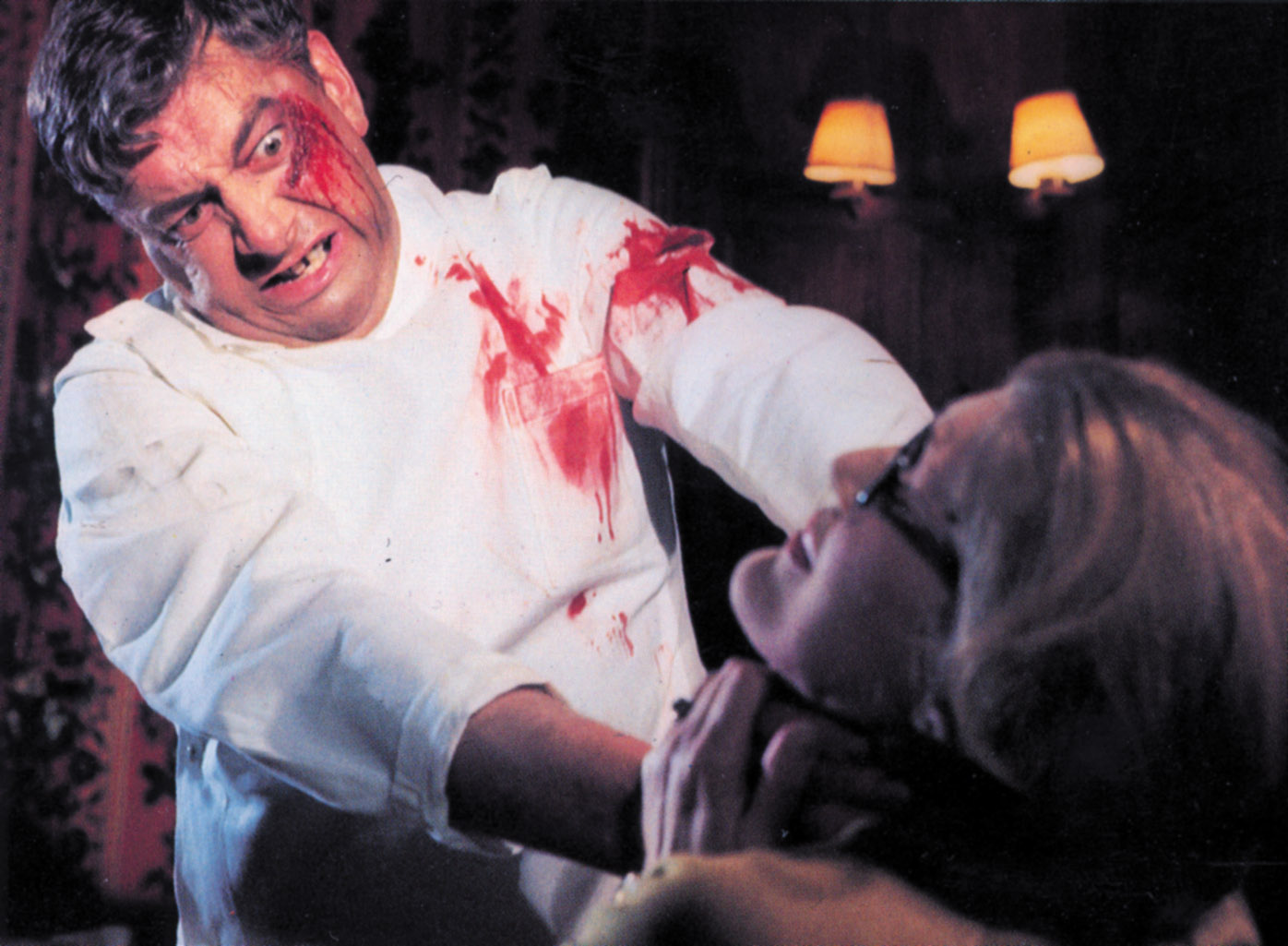 I’ve always been put off by Redemption DVDs because they seem to be marketed at sadomasochistic lesbian vampire Goths and (moreover) their male admirers – and I am neither. Look beyond the packaging, however, and you will often find a decent transfer of a hard-to-find 70’s horror movie, most of them by French director Jean Rollin. Fopp seem to have found a cache of these DVD’s in a cobwebbed crypt somewhere because recently they’ve been selling them off very cheaply. Killer’s Moon was certainly worth the three pounds I paid for it. Only just, though.

Killer’s Moon is not directed by Jean Rollin but by the even more obscure Alan Birkinshaw. He is interviewed in the extras, where he looks – unless it’s my imagination – a little wary, as though he suspects that, in being granted a respectful interview about this film, he is being wound up. But he shouldn’t be surprised that the film has a ‘cult reputation’ – so, I’m sure, does 70’s kids TV animation Mary Mungo and Midge. It’s no guarantee of quality.

In Killer’s Moon, sadly, curiosity value is the main appeal, though in that respect, I feel I got my full three pounds worth. For a start, feminist novelist Fay Weldon (the director’s sister) worked on the script, and, as a Weldon fan of old, I can amuse myself wondering which bits she wrote. Was it the scene where the male killers force their female victims to cook them supper? Or the scene where a rape victim is counselled by a friend to put the whole thing out of her mind and never speak of it again ‘and then we might all live to be wives and mothers’? Hard to say whether this is feminist irony or the kind of thing people just accepted in the 70’s, like all that child abuse happening in front of our very eyes on Top Of the Pops.

The set-up is established in a government office. ‘Haven’t people enough to be afraid of?’, a minister asks upon being told that four lunatics have just escaped from a cottage hospital, where they were being treated with ‘dream therapy’ using LSD, presumably at the taxpayer’s expense. You couldn’t make it up! And even better – I mean, worse – a coachload of choirgirls are headed in their direction! Their coach having broken down, they are forced to stay in a hotel run by one of the few familiar faces here (Hilda Braid, later to appear in BBC sitcom Citizen Smith), little knowing that a quartet of maniacs are about to emerge from the surrounding woods.

‘This is a place for animals, not people’ a local warns them early on, but animals don’t seem to be safe either, since the first indication of the horrors to come is the appearance of a three-legged dog, the leg freshly-severed, which takes refuge with a couple of campers. The dog is played by a real three-legged dog, who lost her leg saving her publican master from armed robbers, a feat which won her a VC. Later, the dog gets to avenge her lost limb by killing one of the madmen. This may seem improbable, the madman being very big and the dog small and three-legged, but they don’t award dogs the VC for nothing.

Aside from the dog, the lunatics are the most interesting feature of the film. They speak in an arch, self-consciously theatrical manner to emphasise their sense of disconnection from their own atrocities – their LSD-derived feeling of being ‘in a dream’. Thus they seem to have escaped from an avant-garde theatre troupe rather than a hospital – at one point even bursting into song. Their bowler hats and white boiler suits they are an obvious nod to A Clockwork Orange but they also prefigure Michael Haneke’s Funny Games, manifesting a detachment from the unfolding nightmare that’s analagous to the viewer’s experience – especially as the level of realism is such that it is in fact quite hard to care, or feel involved. It’s a shame that the film itself never achieves the dreamlike quality the killers’ dialogue (Weldon’s work?) hints at.

Indeed, the best that can be said of the direction is that the camera is generally aimed towards the action. Sometimes there is a zoom, just for a bit of variety, but style is beyond the film’s reach. It has a hard enough job keeping track of all the characters – indeed, Hilda Braid unaccountably vanishes halfway through, only to be rediscovered as the credits roll, lying dead on a bench like an afterthought. Never mind Hilda, success – even moderate success – is the best revenge.