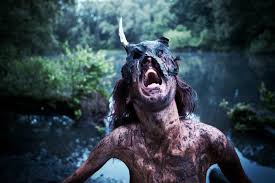 SPRING
If you thought Richard Linklater’s Before Sunset might have been improved if Julie Delpy had periodically turned into a squid (and is there anyone who doesn’t?), then this may well be the film for you.

American backpacker Evan (Lou Taylor Pucci) hooks up with ethnology student Nadia (Nadia Hilker) in Italy, but in the giddy whirl of their romance some of her quirks are not immediately apparent – such as the fact that she is a centuries-old self-replicating creature with a habit of unexpectedly reverting to earlier evolutionary life forms. The ultimate test of true love turns out to be: when you discover your loved one writhing on the floor sprouting tentacles to you (a) run, or (b) say: ‘Can we talk about this?’ Evan opts for the latter, but is he right?

Luckily the couple have chemistry (as well as an awful lot of biology) so the question is not merely academic. Indeed, part of this carefully understated film’s charm is that neither horror nor romance is allowed to predominate – until, perhaps, the end.

The directors (Aaron Moorehead and Justin Benson) – along with Hilker and Cockney geezer Nick Nevan, who plays a Cockney geezer in the film – were on hand to participate in a lively Q&A, inviting everyone out for a drink afterwards. I didn’t go, but it was nice to be asked.

CUB
A Belgian film in which cub scout Sam (Maurice Luyten) who has a murky history of abuse accompanies his troop on an expedition to a French wood supposedly terrorised by a boy werewolf. As it turns out this is merely a boyish joke perpetrated by the scout leaders. The most alarming thing awaiting them is a couple of French louts on a quad bike – oh, and an underground maniac and his masked feral boy assistant, who soon set about brutally killing off the cast. Ostracised by the group, Sam finds himself spending more time than is perhaps healthy alone in the woods, becoming acquainted with what’s really going on.

This is all rather stylish and exciting, informed by a good-natured charm that makes the brutality of the ending a bit jarring, especially as first-time director Jonas Govaerts has rather neglected the back story (as, in the Q&A, he freely admits). He seems like a nice guy, and I was certainly inclined to forgive him a few loose ends. His parents were in the audience, and it was his Dad’s birthday (we applauded this). Recommended.

THE TOWN THAT DREADED SUNDOWN
By now I had found the perfect seat in this screen at the Odeon Covent Garden – just behind the one broken seat, so that no outrageously tall bastard could sit in front of me. It was, sadly, for the least of the horrors witnessed here – a remake of a 1976 film that I’ve never seen but which is described in my Aurum Horror Film Encyclopedia as ‘one of the sleaziest and dullest entries in the teen-slaughter cycle’. Of course, the implication here is that ‘sleazy’ is necessarily a bad thing.

The new film starts with a masked killer stabbing a man to death during a showing of the original Town That Dreaded Sundown, in Texarkana, the town in which the events the original film was based on took place. The original events being, of course, a series of murders committed by a masked killer. Head-spinning meta-horror alert! Unless you’ve seen the Scream movies, of course, in which case your response may be more along the lines of…weary.

But as the killer continues his re-enactment of the murders the clever-cleverness of the Scream franchise is largely abandoned in favour of something closer to pastiche, recapturing what may have been the original’s naïve charm if indeed it had any. Though we know precisely where we are there is some confusion as to when: technically this is set in the present, but at times a glimpse of an antiquated cash register suggests that we are back in the seventies or earlier – unless that’s what Texarkana’s like: ‘A place where the past is still alive’, as the heroine puts it.

Which is another way of saying it’s a deeply conservative place, where the local pastor welcomes the murders because the fear they generate increases his flock, and the heroine’s investigation into the murders (her boyfriend was the first victim) is greeted with patronising smiles from the police.

So this is a critique of smalltown narrow-mindedness then? Sometimes, as when an interracial gay sex encounter takes place in front of a broken billboard emblazoned with the pastor’s face, it seems to be managing that quite wittily. But the film is never anything consistently, and ends up as a mostly endearing meta-porridge in which screenwriter Roberto Aguirre-Sacasa and director Alfonso Gomez-Rejon seem to have got bogged down, no doubt dazzled by the extraordinary meta-textual implications of their project.

As a horror film, it doesn’t work. The dutifully-reconstructed murders are mere punctuation points in a narrative whose main pleasure lies in its digressions – such as the heroine’s interview with the son of original director Charles B. Pierce (it isn’t really him) who maintains that his father was the equal of Orson Welles – and in a skilfully-maintained confusion over whether the people who made this film actually knew what they were doing.

The ending seems to suggest that they don’t: once more we are back in Scream territory. As it turns out that there are two masked killers, one of whom was the heroine’s boyfriend. But… isn’t he…dead?, you gasp. Or rather, groan. It should have ended with the entire town (dead or alive) turning up in flour-sack masks with the eyes cut out. It would have made no sense, but it was just the kind of insane dramatic gesture the film needed at this point.

No Q&A, so I couldn’t point this out, had I been so inclined. Kim Newman was there though – bet he’s seen the original.