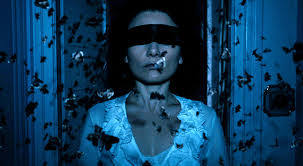 When nervous maid Cynthia (Sidhe Babett Knudson) turns up at the mansion of entomologist Evelyn (Chiara D’Anna) our first impression – as she harshly calls into question Cynthia’s ability to wash knickers – is that Evelyn is an exacting, even cruel, mistress. But appearances can be deceptive – we are in fact witnessing a sado-masochistic sex game between two lovers, though Evelyn’s dominant facade is beginning to crumble under the influence of a more straightforward tenderness – Cynthia, meanwhile, dreams only of being locked in trunks and becoming ‘a human toilet’.

This is director Peter Strickland’s second quasi-horror/exploitation film after the ingenious and intriguing – if ultimately a bit disappointing – sideways look at genre that was Berberian Sound Studio. It is his best film to date. Also, one of the best of the festival – or at least, of my festival – though it could be argued that its appeal is a bit niche. Indeed, I’m not sure how much sense it will make to anyone who hasn’t seen – and appreciated – a few films by prolific Spanish sexploitation director Jess Franco.

A good deal of Franco’s output is pure trash but at his best (1969’s Venus In Furs, say) Franco straddles the divide between art and sleaze with real aplomb, though never with quite as much style and intelligence as Strickland does here.

Even leaving aside the lesbian frolics The Duke Of Burgundy has much that will be familiar to Franco fans – a dream-like air, a woman wandering through a dark mansion clutching a candlestick, dodgy performances. And when I mention this last, that is not to diminish the acting of the principals here: it is the characters who become awkward performers as they attempt to negotiate a compromise between their real feelings and the rules of the game, their often amusing, sometimes poignant, efforts echoing the director’s own negotiations between art and genre.

The carefully-managed look of the film imposes a fetish (for vintage Euro-sleaze) on top of the fetishes that are already apparent, creating an intoxicating artificial world. Moving back and forth from sex games to entomological lectures given and attended solely by women (and the odd tailor’s dummy), it is also a world without men, though the title implies an overarching male presence. The Duke of Burgundy is a kind of butterfly however, and there are a lot of these in the film – no matter how many are pinned down like staked vampires in display cases, they continue to proliferate, completely filling the screen at one point. Are they rushing in to fill the void left by men? Do they represent some sort of acknowledgement of the male gaze? Is this film an abstracted arthouse take on my favourite ‘bad’ horror film, Vernon Sewell’s The Blood Beast Terror (featuring a giant bloodsucking moth played by Benedict Cumberbatch’s – real – Mum)? How would I know? I am happy to live with the mystery unsolved.