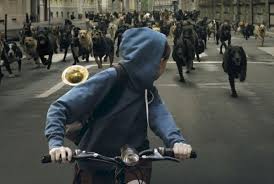 Christophe Honoré’s film is based on something I’ve not read – Ovid’s Metamorphoses – but no need to be alarmed: the stories are spelled out very clearly. Indeed, almost too clearly. The set-up is that Europa (Amira Akili) is a schoolgirl learning about the gods from Jupiter (Sebastién Hirel), who manifests at the school gates one day in a truck with blacked-out windows. It’s almost a child’s introduction to Ovid, but with nudity and violence.

Honoré hasn’t really embedded the gods in the modern day. I suppose he might conceivably have made Argus – he of the hundred eyes – a security guard overseeing a bank of CCTV screens; instead he really is a man with a hundred eyes, which peer out from ugly swellings all over his body. Meanwhile Jupiter lies about naked in the countryside and no-one bats an eyelid. Then again, this is France.

A small snapshot of Europa’s home life (her Dad suggests that her short skirt makes her look like a whore; she spits in his breakfast) suggests that classical mythology, capricious as its gods are, might offer a more sympathetic spiritual environment for a woman than certain other religions I could name – you run the risk of being turned into a heifer, but no-one’s going to stifle your sexuality just because you’re a woman. But whereas Europa comes to believe in these myths, I remained sceptical. Rather than being won over by the simplicity of Honoré’s approach, I thought he wasn’t trying hard enough. These gods are too casual for my taste; the animals they keep turning everyone into have more majesty and vigour.

And talking of animals…

Teenager Lili (Zsofia Psotta) goes to stay with her father in Budapest while studying the trumpet. Not especially welcoming to her, he is even less keen on her dog Hagen, who is finally thrown out onto the street. Two narrative strands emerge: Lili searches for her pet, struggles to fit in at music school, and develops a tendency to ‘run wild’ which is checked when it reaches a certain point (she is arrested for possession of drugs) and gives way to a reconciliation with her Dad. Meanwhile Hagen’s own encounters with what we are pleased to call ‘civilization’ result in him being trained up to become a fighting dog, an experience which motivates him to foment a doggy uprising in the city streets.

Family drama, animal adventure, apocalyptic nightmare – Kornél Mundruczó’s film certainly treads its own path. And ‘tread’ is quite the wrong word, as this is in the ‘Thrill’ segment of the festival, and moves at quite a lick. The doggy cuteness factor is rather played up, which undermines the potential for menace in the latter part of the movie, when the dogs turn against their abusive ‘masters’, but then again we aren’t necessarily on humanity’s side here and this isn’t exactly a horror film. Neither is it an austere arthouse project, even if one audience member in the Q&A is reminded of everyone’s favourite donkey art film, Robert Bresson’s Au Hasard Balthazar. This is closer to Disney – fast-paced fun for all the family (with drug references and violence).

Not that there is anything simplistic about the film – the resolution, which could have been merely ridiculous (the girl tames the animal uprising with her trumpet-playing) is in fact deeply poignant, partly because of the realisation of what must come after – presumably, the dogs, however cute and even repentant, are now going to be put down. I don’t like dogs so – fair enough really. But I have been moved.