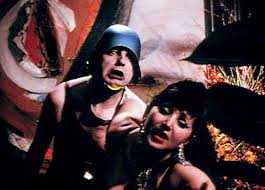 I settled down for this Kuchar Brothers double-bill at the BFI with three cushions (Christmas presents for Mum) in carrier bags, a burden bulky enough to suggest that I should have splashed out on another ticket. With an amused gay man on my left and Brian Sewell (arguably) on my right I was forced to transfer them to one of the unoccupied seats in front of me. Then, at the very last moment, just when I thought I’d got away with it, a couple started along the row ahead of me towards those very seats.

It is hard to think of anything more innocuous than cushions, but this was turning into a real drama. I suppose I could have sat on them – the amused gay man suggested this – but I felt obscurely that this would have made them second-hand. Also, I would have become even more conspicuous than I already was.

Luckily, even with the new couple in place there was still one empty seat left to the left of them. By now the situation had assumed nightmarish proportions in my head and I envisaged the cushions getting further and further away from me in the cinema, as the prospect of a reunion grew ever more remote. But the lights went down and nobody else appeared – gradually, my panic subsided.

If ever a film begged to be watched by an audience that included a pile of cushions as one of its members it is surely Mike Kuchar’s Sins Of The Fleshapoids (1965), a large proportion of whose tiny budget must have gone on soft furnishings. This 43-minute film is nominally SF, and was indeed being shown as part of the BFI Science Fiction season, but, set ‘a million years in the future’, it looks more antiquated than futuristic with its thrift-shop decor. Sybaritic humans lounge on leopardskin eating crisps and chocolate bars while being attended to by fleshapoids, humanoid robots who look just like humans except for Zar, played by a bizarrely-dressed and perpetually-grimacing Bob Cowan, whose performance recalls the more exaggerated aspects of silent cinema.

Though the dialogue is conveyed by crudely-drawn speech bubbles (which rarely connect with the characters’ mouths) this film is far from silent. Rather, the soundtrack is so saturated with music – switching from avant-garde shrillings to lush Hollywood orchestras – that there was presumably no space for anything else. The intensity of the sound and the colours helps channel the Kuchars’ evident enthusiasm for monster movies and melodramas and cinema in general into something that, though evidently artificial, lives and walks. It’s a process that’s approximated by the plot, in which – while the human characters enact a noirish drama of adultery and murder – two fleshapoids discover forbidden love, resulting (rapidly) in the birth of a clockwork toy robot.

Orphans Of The Cosmos transports us into the real future (2008) in which we find Mike Kuchar’s brother George teaching at the San Francisco Art Institute and making – with his students – this 40 minute epic about some young people going to Mars in order to acquire alien objets d’art for the orgy room at a local ‘cannabis club’ operated by a raddled old lush, and inadvertently incurring the wrath of a rubber monster, who destroys the place. This is as far from professionalism as the Kuchars ever were but in spite and because of its intensely amateurish performances, toy aliens and tacky video effects the film lifts off into a realm of childlike wonder and hilarity. And I was reunited with my cushions – though on my very next visit to this screen I was to lose an umbrella. But that’s another story.