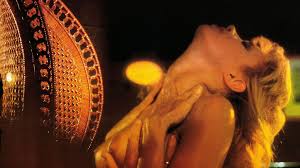 My interest in Polish director Walerian Borowczyck came about by accident. Back in the early 80’s I saw his 1971 film Blanche described in the Daily Mail’s TV listings as one of the most frightening ghost stories ever filmed – at any rate, this is what I remember. As an avid horror fan, I was eager to see it, but it was on one of the other regional ITV channels and thus out of reach. When, years later, I did, I discovered that Blanche was neither a ghost story nor especially scary. But it was too late. I was hooked.

It has been said that Borowczyck disowned everything about Emmanuelle 5 except the film within it. This is Love Express, which as Emmanuelle 5 begins is a succès de scandale at Cannes, where it is compared to Bataille, de Sade, Rabelais, Ovid and Disney by critics, and which causes such a stir that its lead actress (Emmanuelle, played by Monique Gabrielle, a former Penthouse Pet) is stripped of her clothing by an over-excited crowd and forced to take refuge on a speedboat driven by American doorknob billionaire, Charles D. Foster (Dana Burns Westberg). ‘For every door there must also be a doorknob’, he philosophizes suggestively; if this is a come-on it seems to work, as they are soon hard at it below deck.

However, Emmanuelle is eventually repelled by his acquisitiveness (‘You think you can buy me with your money!’) and starts responding to the blandishments of another suitor, crazy-haired Prince Rajid (Yaseen Khan), ruler of Benglagistan, who broadcasts even his most intimate conversations to the populace via loudspeaker and presides over a harem of 50 women who he apparently never touches – though one seems to be having his child.

Emmanuelle visits Benglagistan but baulks at joining Rajid’s harem, and flees with his protestations of love ringing in her ears (from the loudspeaker). With her is Eddie, an adventurer who proves to be in the employ of Charles D. Foster – who, back in the West, she now assists in his attempt to fly the Heron, a plane invented by his father, whose failure to get the cumbersome thing off the ground drove him insane. The plane proves to be as doomed as the budget’s capacity to represent it – it crashes but Emmanuelle bails out and is last seen back in her spiritual (and indeed actual) home, a dance studio, reading a postcard from Foster, who is apparently still alive and telling her that he loves her, albeit in the third person.

There is an amusingly disjointed aspect to all this – a sudden cut from the plane crash to Emmanuelle’s buttocks makes me wish that Borowczyck rather than David Cronenberg had directed the film version of J G Ballard’s Crash. Throughout this film Emmanuelle is haunted by flashbacks to a nude clinch with an unidentified man on a cliff face, a scene from Love Express. This film-within-a-film has all Borowczyck’s distinguishing marks – sex scenes are all but overwhelmed by his fetishistic interest in antique objects (a carved wooden cane has more presence than its owner), compositions are eccentric and often striking. If this is the ‘real’ Borowczyck film, then it’s as though Borowczyck’s work has finally, fittingly, become a fetishized object inside one of his own films.

The rapturous reception Love Express receives at Cannes also works as Borowczyck’s wry comment on his own career – in fact the same could be said of the whole of Emmanuelle 5, with the heroine’s vacillations between two suitors echoing the two contradictory forces that influenced Borowczyck’s career: commercial drives on the one hand and eccentricity freely indulged on the other.

The most clearly Borowczyckian elements of the film outside of Love Express lie in the scenes in Prince Rajid’s harem, where the onanistic and lesbian goings-on recall 1978’s Behind Convent Walls, as painterly a piece of nunsploitation as you are ever likely to come across. Rajid, who regards himself as the true object of his harem’s desires, however they are expressed, introduces Emmanuelle to one of their number who is shown sucking and licking a phallic lightbulb, explaining that she has transferred all her sexual desires onto ‘objects which emit heat and light’. Given Borowczyck’s own obsession with things this seems pretty clearly self-referential. It certainly sets off alarm bells for Emmanuelle, with her determination not to become any man’s possession.

Apparently Borowczyck didn’t get on well with his lead actress – I got the distinct impression that his distaste was transferred onto Emmanuelle herself, who comes across as narcissistic, dumb, shallow and arrogant. At Cannes we hear her garbling a literary quotation (‘Wasn’t it Oscar Wilde who said it’s better to be talked about than not talked about?’) while her reference to Rajid’s having ‘the eyes of a barracuda’ is greeted with the response: ‘Takes one to know one darling.’ Later, confronted by a body of flowing water in Benglagistan, she manages to identify it thus: ‘It’s a river.’

The last line, written on the postcard Emmanuelle receives from Charles D. Foster (and frames) is: ‘He loves Emmanuelle’. Perhaps this is the happiest possible ending for our heroine – containing the assurance that she is loved without the compromises involved in a real relationship. She may have avoided becoming an object owned by men, but in the pristine calm of her dance studio, surrounded by mirrors, she seems to be no less an object. The only glimpse in the film of her inner life is that repeated cliff-face encounter from Love Express. It’s as if the only possibility of true happiness for her lies inside a Borowczyck film – though not one that really exists. And not Emmanuelle 5.

The film’s thrown-together aspect probably reflects the fact that it was in fact thrown together, but there’s a chaotic energy to it that echoes the crazed invention of Borowczyck’s 1967 feature length animation, The Theatre Of Mr. And Mrs. Kabal. At the beginning of that film Borowczyk himself appears to meet his creation Mrs. Kabal, a mechanical creature with a bleeping robotic voice – understandably alarmed, he flees and substitutes for himself the diminutive Mr. Kabal, whose favourite pastime is looking through his binoculars at glamorous women.

Mrs Kabal is nothing like Monique Gabrielle’s Emmanuelle. For a start she has – despite being a line drawing – much more depth: enough that Mr. Kabal, having removed her head, spends quite some time exploring her bowels in search of a butterfly. There’s no equivalent scene in Emmanuelle 5 – still, Borowczyck’s initial encounter with Mrs. Kabal and subsequent departure from the film oddly foreshadows his abandonment of the film after taking a dislike to its lead actress. If indeed that happened.

Emmanuelle 5 may not be up there with Blanche but his filmography would be sadly diminished without it – at the very least it’s much more fun than any fourth sequel in a softcore franchise has any business to be. The theme tune (‘I love to be loved/Everyone does’) is about as kitschy as it gets; elsewhere, Pierre Bachelet’s score adds a faintly spooky undercurrent to the film’s dreamy waywardness. Emmanuelle 5 is no masterpiece assuredly, but it negotiates the border between art and trash in a lively fashion, and without straying too far into the land of kitsch. Can you ask for anything more? Well yes, but this is what you get. Although the US version has extra scenes shot by Roger Corman apparently –  I doubt that he improved it any.