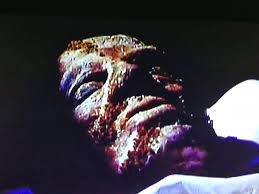 Possibly for budgetary reasons, Kieron Moore plays both romantic lead and villain in this shocker from director Sidney J. Furie. In the former capacity he courts Hazel Court’s Nurse Linda Parker, who works at his father’s surgery in Cornwall, while in the latter he performs surgical experiments in a disused tin mine, in his dogged attempt to achieve that bog-standard (but in this case somewhat elusive) horror-movie objective – raising the dead.

A tin mine might not sound like the ideal location for ground-breaking medical research but then the techniques employed by Dr. Blood (yes he really is called that, as is his father) don’t look too complicated – just a question of digging out a dead heart and chucking a fresh one into the cavity, then sewing it up. It’s as though he hopes to pull it off through sheer chutzpah. However, not only does the trick tend not to work, it also tends to require the death of an existing villager, so isn’t really adding to the sum total of human happiness. Altogether, it’s no wonder he was chucked out of that Viennese medical school.

It’s quite tempting to read Dr. Blood’s crude way with hearts as a metaphor for his clumsy efforts in the direction of romance. Poor Linda is supposedly won over by a bunch of flowers blatantly ripped from a nearby vase – later, Dr. Blood furthers his campaign of seduction by terrorising her in a mine shaft, and his idea of post-funeral small talk is to casually ask: ‘Linda, how was your husband killed?’

It’s her attachment to this dead husband rather than his own clumsiness that he blames for Linda’s resistance to his blandishments, so in a neat dovetailing of the film’s strands he decides to resurrect her husband’s corpse so that she will (a.) be impressed by his Godlike abilities and (b.) will be able to make a quick visual comparison which he naturally hopes will go in his favour, given that the husband has been dead for some time.

On this occasion, perhaps due to the much-touted Power of Love, the experiment does work, but although Linda is indeed unimpressed by the sight of her lost love’s rotting corpse shambling towards her, it doesn’t seem to endear her to Dr. Blood in the slightest. By this point, in any case, their lover’s quarrels have degenerated into Science vs. Religion arguments, never a good sign. Blood is left to grapple with Linda’s mouldering husband as his improvised lab goes up in flames.

This film has the feel of one that has come weirdly adrift from generic conventions without really having a clue as to where else to go, except into the realm of the absurd. Moore is plausibly over-excited throughout and the thing has some entertainment value as a love story manqué, but the best of it is perhaps the vivid photography from Stephen Dade which must have done wonders for the Cornish Tourist Board, assuming that audiences overlooked the murders, gory experiments etc. Or didn’t believe them.