Don’t Step On It, It Might Be Jake Gyllenhaal: Nightcrawler/Enemy 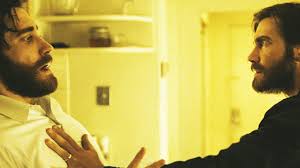 Lou Bloom (Jake Gyllenhaal), the central figure of Dan Gilroy’s Nightcrawler, resembles nothing so much as a cockroach that has unaccountably taken on human form – emerging out of the LA night as a petty thief with aspirations, he soon graduates into a ‘nightcrawler’, a freelance cameraman specialising in car accidents and murders, the more gruesome the better. This is a job in which an absence of humanity is a distinct advantage, and Bloom is better qualified than most with his bug-eyed stare and habit of talking in upbeat self-help/business-speak cribbed from the internet. Well-played as he is, he’s less a credible character than a mirror held up to a morally-bankrupt society, and the more the film distracts us from him – or at least embroils him in a story – the better it is. When its aspirations to satire are merely embodied in him, it tends to fall a bit flat.

Luckily there is just enough going on around Gyllenhaal to keep us interested. Rene Russo and Riz Ahmed contribute convincing turns as, respectively, the cynical TV executive buying Bloom’s footage and Bloom’s decent, clueless, doomed assistant. A respectable thriller plot evolves from Bloom’s happening upon a freshly-committed murder before the police arrive, and as the pace steps up in the second half, the film really comes together, notably in a live-broadcast walk-through of the murder scene Bloom discovers, with the TV narrator as awestruck by the victims’ ‘beautiful home’ as by the corpses furnishing it.

The main problem is that while Gyllenhaal’s performance is a technical triumph, it doesn’t let us in, leaving the film with a blank at the centre of it. Gyllenhaal is also at the centre of Denis Villeneuve’s Enemy, and since he’s split into two here, you could say there’s a blank at the heart of this film too – which in this case is not a problem.

In this adaptation of Portuguese writer Jose Saramago’s novel The Double Gyllenhaal plays Adam, a downtrodden university lecturer. After renting out some dire comedy film he becomes obsessed with a bit-part actor who happens to be his exact double – this is Anthony, a guy whose self-regarding arrogance seems hardly justified by his crummy CV. Nevertheless, in comparison to Adam’s hole-in-the-wall existence, he has the perfect life – nice apartment, pregnant girlfriend, and membership of an exclusive and mysterious underground sex club to boot. Adam has an urge to investigate further until, soon enough, he doesn’t know who he is anymore.

As ‘twin’ performances go, Gyllenhaal’s easily outshines Jean-Claude Van Damme’s in Double Impact while never scaling the dizzy heights achieved by Jeremy Irons in Dead Ringers. If anything, he overplays it – seeing his stooped, tentative Adam side-by-side with his swaggering Anthony, you certainly have no trouble telling them apart. But it may be that the film is opaque enough already without further ambiguities to confound us.

This opacity is partly literal – the events take place in a bleached-out and subtly deformed Toronto (at one point a giant spider is seen hovering mistily over it). Less keen on explaining itself than in creating a troubling atmosphere, the film achieves a blend of David Cronenberg’s glacial unease and David Lynch’s nightmarish distortions that’s so seamless it practically makes identical twins out of them. But it doesn’t feel secondhand. Enemy is its own creature: an absorbing dream that is continually on the verge of plunging into nightmare.

The effect of that final plunge, when it comes, is perhaps to suggest that the real enemies here are not the two Gyllenhaals in particular but men and women in general – though ‘suggest’ is rather a mild word to use in conjunction with one of the greatest WTF endings in recent cinema, an ending that is likely to leave your brain frazzled – though Gyllenhaal’s Adam only greets it with weary resignation. If Leo Bloom was an insect dreaming he’s a man, we might now imagine ourselves deeper into that same disconcerting dream – Gyllenhaal’s not a cockroach here, but creepy-crawliness, it turns out, isn’t far away.

Mind you, there was a guy in the audience at the Prince Charles who seemed to think Enemy was a hilarious comedy, which was quite disconcerting in itself.