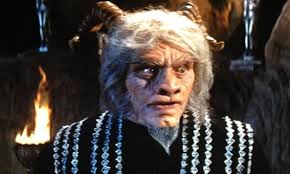 I’ve taken to listening to Shaun Keaveny on BBC6 Music in the mornings, via my TV – specifically Freeview 707. A couple of months ago my just-awoken fingers were fumblingly pressing those figures out on the remote and hesitated too long, inadvertently accessing 70, at which point a message came up announcing that 70 was shortly going to be the new home of the Horror Channel. The Horror Channel! I was very excited, a feeling which lasted right up until I saw the schedules and realised that 99% of everything they showed would be shit.

Well, Sturgeon’s Law and all that – and really it was just as well, since otherwise I’d never have been able to leave the house again. As it happened, quite a lot of time passed before I actually saw a film on the Horror Channel all the way through. My attempt to watch Horror Of Frankenstein (1970) on opening night failed because I’d had a lot of wine after my Uncle Ted’s funeral (he wasn’t really my Uncle, he was my Dad’s cousin) and the TV screen kept darting around the room. But as everyone knows, HOF is dismal anyway.

The very next morning I started to watch a more recent effort called Monster!, a self-reflexive monster-movie pastiche that was so meta it began with a scene from a film-within-a-film that was taking place in a cinema. My head was spinning, though on reflection there may have been other reasons for this. The cinema was showing a 50’s film called Colossus Of New York, a film which – it soon became apparent – I would much rather have been watching. Monster! lacks the rough edges of the kind of low-budget ‘bad’ film it purports to celebrate. Inspired by a burning ambition to fill a hole in the schedules – by which I mean uninspired – it’s shot with tiresome competence. There’s nothing worse than mediocrity – although technically that isn’t true, of course. Anyway the upshot is I switched off.

Which meant that The Devil’s Rain (1975) has the honour of being the first film I watched on the Horror Channel. This was no accident; I practically made an appointment to see it. The film stars Ernest Borgnine, William Shatner and a pre-fame John Travolta, and the director is Robert Fuest, who made the two Dr. Phibes films with Vincent Price in the early Seventies – films that, while never quite as good as they should have been, were still pretty damned good. And if that suggests that The Devil’s Rain might lean towards camp, the credits also inform us that Anton Szandor Lavey, ‘High Priest of the Church of Satan’, has been employed as a consultant to ensure a degree of authenticity. And indeed the resulting film is so authentic probably no-one who isn’t quite high up in the Church of Satan could possibly understand it.

Ernest Borgnine plays a Satanist presiding over a ghost town full of eyeless puffy-faced people in cowls. He hangs out in a rather impressive church with a stained glass window depicting a version of Satan that bears a curious resemblance to Felix the Cat and is desperately seeking a book (or Book) that contains something vital relating to his ‘congregation’ (who he is also magically reassembling despite the fact 300 years have passed since they first gathered together). This Book is not very thoroughly hidden in a hole in the floor in William Shatner’s house and is sometimes brazenly brought out and leafed through, and quite how it has escaped Borgnine’s clutches for so long is hard to fathom, given his awesome supernatural powers (sometimes he grows horns).

But then at one point Tom Skerritt, playing the hero, and Eddie Albert, playing a parapsychology expert, sit down and try to work out the plot without getting anywhere. Perhaps they are asking the wrong questions. For example they wonder why Borgnine waited 300 years before taking action, but don’t ask how he has managed to live so long.

The Devil’s Rain itself is a sort of aquarium for tormented souls which is eventually smashed by Shatner, at which point it starts raining for real and, in an oddly moving and poetic scene that goes on forever, everybody melts. Although Tom Skerritt remains solidly alive to enjoy a romantic clinch with… Ernest Borgnine, who has mysteriously managed to swap places with his wife. It is fair to say that here is a film that leaves a few questions unanswered – questions like: what the fuck’s going on?

However, although Fuest is possibly out of his element here The Devil’s Rain is intermittently stylish and kind of fun. Borgnine, who makes me feel a bit queasy at the best of times, really outdoes himself here – and, like I said, everybody melts. As for the Horror Channel, well it hasn’t changed my life, but it is refreshing to hear Vincent Price proclaim (in Masque Of The Red Death) ‘But Satan rules the universe!’ on daytime TV. Not a sentiment you’re liable to hear expressed on Loose Women, as far as I know.