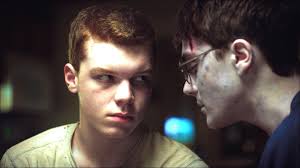 On the face of it this has everything you could possibly want from a Brazilian- German co-production – it begins in Brazil and it ends in Germany – and beneath the surface there’s enough happening to offset a vague sense of one’s having seen something like this before.

Brazilian lifeguard Donato (Wagner Moura) saves Konrad (Clemens Schick), a German tourist, from drowning but fails to rescue Konrad’s friend. Falling in love with Konrad he moves to grey Berlin, where at first he badly misses the sea. Then he has a change of heart and decides to stay, only to be tracked down by his younger, wilder brother Ayrton (Jesuita Barbosa), who resents his decision to abandon his family in favour of, as he puts it, ‘taking it up the arse here at the North Pole’ (this line providing the biggest laugh of the night).

Karim Aïnouz’s film looks good but its strength lies in the fact that it never loses a sense of the emotional depths of its characters, even as those depths remain somewhat obscure, possibly even to the characters themselves. The beginning of the romance is given a mysterious resonance by the sea’s refusal to give up the body of Konrad’s friend, and later on even a rather tired arthouse trick – a frantic nightclub scene overlaid with slow, solemn music – exemplifies the director’s commitment to evoking the deeper undercurrents of emotion beneath the shimmering surface of things.

There’s nothing funnier than a man in a dress, said Quentin Crisp (in The Celluloid Closet), and an LGBT audience proves no exception to the rule – though of course this is sympathetic laughter. Hard to imagine Francois Ozon’s beautifully-realised film evoking any other kind.

Romain Duris is the bereaved husband who finds that the best way to treasure the memory of his late wife is by donning her clothes; Anaïs Demoustier is the wife’s best friend who stumbles across his secret – initially repulsed, she soon takes to aiding and abetting the unfolding of ‘Virginia’, a whole new identity. This process acquires the secretive character of an illicit affair, which indeed, after numerous sticky moments, it becomes.

In this latter-day variation on a Douglas Sirk melodrama, Ozon handles complicated sexual territory with an effortless sweep, taking comedy, noir-ish guilt, self-discovery and romance all in his stride, and the two leads are superb. Though this is based on a Ruth Rendell story, which may lead you to expect something darker, the film is almost feelgood – that this didn’t disappoint me can be taken as high praise.

Indeed he is, but the question is – does anyone care? A much-tormented nerd, he seems to have acquired more friends after his untimely death than he had when alive. Two, to be precise – and one of them is thinking twice about it. Dead people can be so…needy.

Rock-collecting Gracie (Morgan Saylor) and sporty Adam (Cameron Monaghan) bond over Jamie’s death, which may be murder, and begin a tentative romance, but when Jamie (Noah Silver) starts appearing outside Gracie’s bedroom window she gives him short shrift. Adam, however, is more interested and wants to ‘help’ Jamie, who stares at him with a hunger that might be for his body, his blood, or for life itself, and they start hanging out in suitably bleak areas with Jamie’s dead friends. Although there aren’t many of those either – mainly a crazy girl who once killed her parents with an axe, and, stuck in a rut, continues to do so night after night, until Adam puts a stop to it by burning her house down, at which point the friendship turns distinctly sour.

The death of a bullied teen in a horror film is generally the starting point for a series of gory revenges, but here shock, and schlock, are not on the menu. It sometimes feels that the film, based on Christopher Barzak’s novel One For Sorrow, is stranded (as director Clayton Smith acknowledges in the Q&A) in a kind of limbo: not horrific enough for horror fans, not gay enough for the LGBT crowd. Indeed, the LGBT aspect only becomes really overt in the repeated – occasionally to the point of risibility – emphasis on the closet in Adam’s bedroom, where Jamie tends to lurk.

But there is a poignancy to the realisation that Jamie will never be able to emerge from that closet, merely retreat into its seemingly endless depths. Adolescence – especially in a small rural town such as the one these characters live in – is itself a kind of limbo, and the film’s muted approach evokes it nicely, working up an atmosphere of clammy intimacy and a lingering mood of unease, even if, as a drama, this never quite takes off.