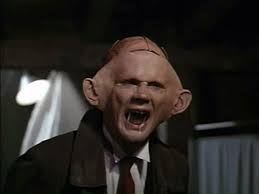 Although I don’t think it has been languishing in obscurity exactly (it’s showing on the Horror Channel as I write) Popcorn is a film I’ve somehow missed. Luckily Michael Blyth, masterminding the BFI’s Cult strand, has given it an airing and thus allowed me to atone for that oversight. In Mark Herrier’s film a group of film students decide to put on a horror movie marathon complete with William Castle-style hysteria-inducing gimmicks (including a giant mosquito), which are then used viciously against them by a hideously-scarred maniac lurking in the wings.

Alternating between the endearingly clumsy and the genuinely unnerving, this resembles a dry run for Scream – though much less slick, it’s rather more fun I think. And there’s further fun to be had from the parodies of 50’s sf/horror movies on show – Mosquito and The Attack Of The Amazing Electrified Man (in which a condemned criminal takes to the electric chair like a duck to water). There’s also a Japanese film called The Stench – we don’t see a lot of this but the title is eloquent enough – and an avant-garde short called Possessor, the work of deranged director ‘Lanyard Gates’, who we initially assume to be the maniac until he turns out to be one of the students (Tom Villard) a guy whose nerdy amiability proves to have been as much a mask as his latex face (or faces).

His back-story is a little involved, but somehow it’s all worth it for the moment where his convoluted – and of course insane – self-justifications are greeted coolly by the heroine (Jill Schoelen) with the phrase: ‘That makes perfect sense.’

That there’s some wit on display here is not so surprising given that Alan Ormsby (Dead of Night, Deranged) scripted this under the name ‘Tod Hackett’, as well as directing the movie parodies. The ‘meta’ element is cunningly exploited for unease (the audience cheering on the killer at the end, assuming it’s all fakery) and amusement (the film student dismissing Bergman’s entire oeuvre as inferior to the Police Academy series.)

Perhaps the oddest thing about the movie is that it was filmed in Kingston, Jamaica, though the only real sign of this – unless you know Kingston well – is the reggae band who do a couple of numbers halfway in. Other than that it’s Canadian through and through. None of which explains how it escaped my attention in the first place, but I’m pleased to have the opportunity to make its acquaintance now. My only disappointment is that, in the spirit of the thing, the BFI didn’t wire up the seats to shock the audience at appropriate moments.