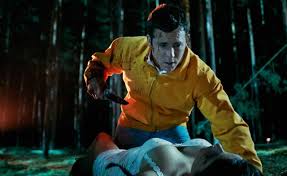 A toy factory worker in a small American town, Jerry (Ryan Reynolds) is your standard eager-to-please psychotic passing for normal, at least until he starts ticking the box marked ‘serial killer’ by stabbing his indifferent love-object (Gemma Arterton) to death and cutting off her head. Even then, when he assures his therapist that he doesn’t hear ‘disembodied voices’ it’s the truth – what he hears are the voices of his cynical cat, his understanding dog and, as the film moves along, the severed heads he takes to keeping in the fridge.

Marjane Satrapi’s film (from Michael R. Perry’s script) made me feel like I’d taken all the drugs Jerry ill-advisedly throws down the sink – numbly contemplating a world that’s blandly upbeat on the surface but thoroughly skewed deep down. A bit like watching a Ryan Reynolds romcom in a way – but better, obviously. It’s the kind of slightly cartoonish project that Jim Carrey might have ruined but Reynolds pulls it off with a certain goofy charm that still has an edge to it.

I suppose you’d call it a black comedy, but I prefer to think of it as a celebration – and a critique – of a peculiarly American kind of innocence, that faith in people which persists right up until the moment you find yourself in their living room staring at their collection of Tupperware boxes filled with human flesh. Jerry himself is the ultimate innocent – when he blames his murders on the cat, he isn’t exactly lying.

A final song-and-dance number feels like the film is straining a bit too hard to prove how weird it is (no need: really!) but mainly it succeeds – partly by avoiding any big laughs or scares, any highs or lows – to suggest how fundamentally twisted the ‘ordinary’ could be. Not that the mainstream can necessary tolerate The Voices – the amount of empty space around me in the large downstairs screen of the Prince Charles suggests this may not be what people want from ‘a Ryan Reynolds movie.’ But it turns out to be just what I want, even more than seeing him ‘Buried’ in 2010.