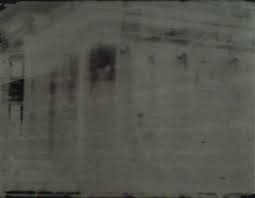 Experimental cinema – you either love it or you hate it. Or you don’t know what to think. The BFI’s Will Fowler assembled this double bill in January 2015 under the heading of ‘Transcendence’. And rightly so, I think.

The Hart of London confounds our expectations from the off by not being about London England but London Ontario. Director Jack Chambers probably wouldn’t have seen that as particularly perverse since he was born in London Ontario. But, perversely, I do.

Chambers further confounds us by layering quivering images – deer, trees, people – on top of each other to the extent that they often blur into a white fog in which nothing can be distinguished, making me feel like I’ve died and gone to – well not exactly Heaven. But not exactly Hell either (that came later).

Gradually the image stabilises and things get clearer, at least in one way. There is in fact quite a lot of incident on show, from the birth of a baby to the slaughter of a sheep to men boxing each other while standing in barrels. The soundtrack, meanwhile, is largely given over to bursts of natural sound – roaring wind, rushing water. Struggling in the midst of all this to find a point to grasp, I seemed to apprehend a vision of nature as simultaneously a monstrous overwhelming force and something terribly fragile, at the mercy of humanity. This dichotomy is resolved hauntingly at the end in home footage of Chambers’ sons feeding deer while on the soundtrack you hear their mother’s voice saying repeatedly: ‘You have to be very careful’.

This seems to be the thing about experimental cinema – it’s over before you know what to think of it, but if you watch it again to make sure, you discover an entirely different film. And therefore anything I say is valid. Phew.

I also left my umbrella in the cinema. I’m not sure if this is relevant but in the spirit of experiment I offer it up nonetheless.