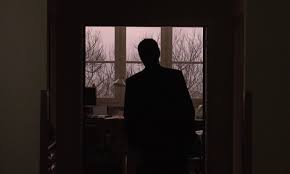 It was a lovely day, sunshine sparkling on the Thames, Green Park bustling with life. The freshness in the air seemed almost to be trying to dissuade me against seeing a bleak existential drama about death at the ICA, but I was determined – even if, in the event, it nearly put me to sleep.

That is not to say that Portuguese director Vitor Gonçalves has made a bad film (his first since his debut 30 years ago) – just a slightly soporific one. It deals with Hugo, an office worker who lives for his job, whatever that is, until Antonio, his boss – if it is his boss – is diagnosed with a terminal illness, which not only disrupts his routine, it (arguably) makes him feel that he must follow his superior’s example and expire (as of course he must, sooner or later). This precipitates a crisis that has him doing a lot of standing or sitting around in gloomy and largely deserted interiors. The only possibility of escape from all this lies in his air stewardess ex, but the pair’s attempt to revive their relationship seems to be scuppered from the off by the overwhelming symbolism of her job (she happily in the air, he miserably earthbound).

Hugo is, let’s face it, depressed, and with its austere approach the film does its level best to make us share this feeling, and with some success. For the viewer the main relief from Hugo’s twilight existence comes from the Super-8 films bequeathed to Hugo by Antonio, faded yet alluring footage of seas and cliffs which suggest the possibility of escape even as their antiquity denies it.

At times this threatens to become a parody of a doom-laden European art-movie – when somebody asks the hero: ‘Don’t you think this is getting a bit deadly?’ I could easily imagine a less committed audience than we were giggling. But we didn’t – and we were right not to. Because – just as ‘depression’ may conceal a whole world of subdued feeling – so, beneath the solemn, somnolent surface something blazes darkly here. The presence, or absence, of death is conjured to quite unsettling effect, and even the ping of Hugo’s microwave as it finishes cooking his ready-meal is invested with a non-specific menace.

Although it is fairly easy to grasp what is happening here – nothing – there is also something elusive about The Invisible Life that implies endless spiralling complexities. There are odd disjunctions between Hugo’s narration and the images, so that at one point it seems that Hugo starts to tell us about a dream he had just after we have been shown it. None of which was quite enough to shift the drowsiness that had taken hold of me – though eventually I started to wonder if giving in to it and falling asleep entirely was in fact the best way of appreciating the film.

Or perhaps the key to the film lay in the sounds of distant voices constantly chattering and shrieking somewhere beyond Hugo’s dismal realm: life is going on elsewhere. And so, when I left the ICA, it proved to be. It was just a bit cooler, and darker, than before.