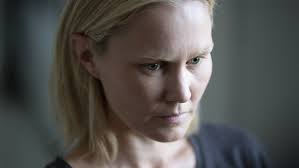 The old Renoir cinema has resurfaced as the Curzon Bloomsbury. It hasn’t got any bigger on top but underneath it’s a rabbit warren, leading me down dark tunnels in search of the ‘Minema’ screen. This sounds small, and so it proves to be – so very intimate that the shadow of anyone in the auditorium standing up or sitting down is cast with clarity upon the screen. Somehow, all this makes it perfect for Blind.

In Norwegian writer-director Eskil Vogt’s film Ellen Dorrit Petersen plays Ingrid, a woman who deals with the trauma of sight-loss by staying in her apartment all day inventing stories which express her terror, self-pity and rage, while her husband Morten (Henrik Rafaelsen) encourages her to return to the outside world.

The film veers between the stories and Ingrid’s lonely existence in a disorienting way – this narrative mischief is like her secret revenge on the world of the sighted (or at any rate, the cinema audience), but it also expresses her loss of control over that world. The resulting confusion is exemplified in a scene where two characters meet in what initially seems to be a café, until we see the world beyond the window whizzing past and realise it’s a train – or is it a bus? Oh no, wait – it’s a café again.

Whether you find this kind of thing alienating or dazzling is perhaps a matter of taste but there’s no doubt that Vogt handles it with a pleasingly delicate touch. Initially neither the fiction nor the fact is allowed to dominate, so that the ‘fictional’ characters carry as much emotional weight as the ‘real’ ones. The fictional ones include a sad guy who spends his hours going to the cinema on his own (uh-oh) and a woman who becomes Ingrid’s husband’s lover – and is herself struck blind as our storyteller’s anger gets the better of her authorial objectivity.

Ingrid’s fiction increasingly becomes a vehicle for a farcical revenge against this fictional lover – so obviously that the film loses its grip a little. But the collapse of the fiction is a necessary prelude to Ingrid’s re-emergence into the world and as this story comes to fruition the film too recovers.

Straddling both fantasy and reality, her long-suffering husband is the key to Ingrid’s salvation – blindness has turned him into something threatening and mysterious, whose potential for betrayal her stories explore. She imagines him sitting silently in the apartment, an ambiguous and unnerving presence secretly watching her. When, at the end, she laughingly dismisses him as ‘boring’ we know that she has finally managed to ‘tame’ the restless fictional version of her husband and, as it were, take him back.

You could say that the film’s most striking image is one that it – aptly enough – never shows, only tells. Ingrid recalls that, in her sighted days, she never saw a blind mother. She would have known because a blind mother walks ahead of her pram, pulling it along behind her. This leads to a humorous remark (or it probably is in Norway) about nobody ever having seen a black man on a bicycle. One appears at the end, however, to give Ingrid directions to the chemist, where she is going to buy a home pregnancy test kit – not that she sees him, of course.

Petersen’s performance manages to imply the woman Ingrid was before the accident while perfectly incarnating the resentful, frightened, slightly crazy person she becomes – meanwhile Vogt navigates what could have been a morbid subject with a light touch that still gives the darkness its due.