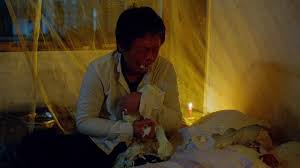 ‘What is this life if, filled with care/We have no time to stand and stare?’, said the Victorian poet W. H. Davies. Good point, and a view clearly shared by Chinese director Tsai-Ming-liang, who transfixes (hopefully) his audience with fixed shots of his characters and landscapes, shots that may occupy the screen for quite some time. Action fans may be disappointed.

This, his latest – and possibly last – film is very far from being an exception. In fact, although I’ve only managed to see two Tsai Ming-liang films before – Vive L’Amour (1994) and I Don’t Want To Sleep Alone (2006) – this study of marginal lives intersecting (or disconnecting) in unsympathetic urban spaces initially seemed a little over-familiar. Vive L’Amour features a romantic dalliance with a watermelon – here, the hero (Lee Kang-sheng) enjoys a similiar ‘moment’ (which lasts a lot longer than a moment) with a cabbage. It ends in tears.

In fact the levels of anguish are generally higher here than in my previous two Tsai Ming-liang experiences (and they are experiences). The protagonist is a homeless father of two small children eking out an existence in dismal abandoned spaces around Taipei. His job (the perfect job for someone in a Tsai Ming-liang film) consists of standing still holding a sign at a busy traffic intersection. Altogether, it’s no wonder he seems to be on the verge of mental collapse.

It’s when he finally goes over the edge – a point marked by the Cabbage Scene – that the film becomes distinctly more interesting as it takes a turn towards the Gothic (or Tsai Ming-liang’s version of it at any rate). A woman takes him and the kids in hand, allowing them to share her nightmarish apartment, the state of whose crumbling walls hardly seems explicable in any straightforward way, though she blames water damage – or, as she puts it, ‘the house was crying’. Her favourite pastime is to stare at an artwork in her dismal apartment block depicting a river bed filled with boulders in front of some mountains, occasionally relieving the dryness of this prospect by pissing in front of it.

In the penultimate shot she and the hero stare at this artwork (out of shot) for an incredibly long time, during which at least two people left the cinema. At first – as throughout this – you admire the composition of the static shot and speculate about what the two characters are thinking; then after a while you start wondering when and how it will end: then you come to understand that it has gone on for so very long that it can’t reasonably end, because were one of the characters to clear their throat and say something like: ‘Well, it’s getting a bit late’ the wrench back into the conventional would render the whole thing absurd.

So you just relax and accept the fact that it never will end, neither the scene nor the film, and you will be sitting in the ICA for the rest of eternity. I always knew this would happen to me eventually if I went to see enough art movies. I don’t mind.

But then the man moves forward to half-heartedly embrace the woman and the perspective finally changes. Ah yes, human contact. I’d forgotten about that.

It may be that Tsai Ming-liang’s shift into a kind of Gothic mode represents an optimistic leap forward in his aesthetic. His urban spaces used to be coolly indifferent to his characters, but Gothic landscapes are in tune with the emotional states of those who live in them. That must offer hope of a kind, surely? Even if the basic emotion is despair.

In the last shot we are behind the two characters, staring at the mountainscape and (eventually) watching them leave (separately) until we are left to regard what by now seems an authentically haunted space. Haunted by what though? Well, that’s the question; one of the questions. Reading a review of this in Sight and Sound I was intrigued to discover that I may well have made up my own film as I watched – that its scenes do not necessarily tell a linear story but need to be interpreted as isolated events. Yes, I had noticed, vaguely, that the main female character is not always played by the same actress – or maybe it’s not always the same character – but I was oddly determined to dismiss this from my mind. Just as well I’m not a professional.