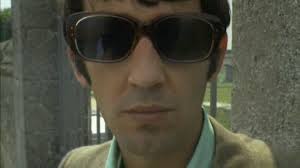 Forget everything I said about the Horror Channel, like for example that it’s 99% shit. In fact it has been keeping me fed with delightful tidbits without over-stimulating me – what more could anyone ask for?

This is a case in point. Like The Devil’s Rain it was directed by Robert Fuest but unlike that film it shows Fuest at his best. It’s a simple enough story about two young women, Cathy (Michelle Dotrice) and Jane (Pamela Franklin) going on a cycling holiday in France and being targeted by a sex killer. This simplicity is a strength – the less that’s going on the better this is. The scene leading up to the moment where Cathy discovers that her bicycle has been vandalised – and that, therefore, someone is out to get her – is a masterclass in building tension out of tiny details: a subtle movement of shadow, a detuned radio, a distant jet plane. Fuest manages to invest the bleak rural landscape with such a sense of menace that an actual killer seems beside the point – the countryside seems quite capable of doing away with the odd tourist all by itself. Especially as it’s adorned with the Horror Channel’s logo – the word ‘Horror’, in white, continually catching my eye in the left hand upper corner of the screen, like a spectre caught in the branches of a tree.

But sadly the landscape proves to be a red herring. And when the script by British TV stalwarts Brian Clemens and Terry Nation really kicks in, these proliferate alarmingly. Among the suspects are an English spinster who finds sex ‘loathsome’ and a batty old Frenchman whose first impulse on spotting Cathy’s discarded knickers is to put them on his head.

Given the script’s tendency to complicate things it seems hardly likely that the prime suspect, Paul (Sandor Eles) – a handsome stranger who claims to be an off-duty policeman – is really going to be the killer, and since Jane spends much of the latter half of the film in terrified flight from him, this does defuse the tension a wee bit.

As does the fact that, from a present-day perspective, there’s more than a slight whiff of Allo Allo about the locals. Still, at least they are speaking (unsubtitled) French – the girls don’t, which yields another unforced way of increasing the sense of isolation the film builds around them. And there is a certain irony in the fact that the killer turns out to be the gendarme, this being one of the few French words Jane knows.

For the most part the film’s strengths lie in Fuest’s style and ability to conjure up an atmosphere of dread. At the end it starts to rain, an eventuality which was forecast earlier in the film by one of the French characters – to incredulity from Jane. We see the drops fall onto the skylight of an abandoned camper van, obscuring the late Cathy’s legs, in a shot that seems to evoke Hitchcockian voyeurism even as it offers up a melancholy critique of it. It’s an eloquent image, rendering language, whether French or English, quite superfluous.