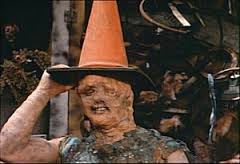 It’s fair to say that showings of films in the Cult strand at the BFI have been somewhat underpopulated. In spite of a mention in Time Out, this is no exception – which is as it should be. What point is there in a cult film if everyone wants to see it?

This is one of the best Troma films but if you know anything about Troma you’ll be aware that that isn’t saying much (if you don’t know anything about Troma, look it up – you’re already on the internet, aren’t you?) The violence is ludicrously excessive and the humour crass – there’s even a mother-in-law joke for Christ’s sake – but there’s also a certain generosity of spirit (apparent in the willingness to let even minor characters have their moment) that redeems the gay stereotypes and blind gags.

The plot is straightforward enough. Gym janitor and über-dweeb Melvin Furd (Mark Torgl) is picked on by various psychopathic fitness freaks and winds up falling into a vat of toxic waste. His mother mistakes his subsequent transformation into a monster for the onset of puberty but she isn’t far off: he’s become a superhero, the next best thing. Basing himself in the local dump, the former Melvin (now much larger, ugly in a whole new way, and played by Mitch Cohen) sets about (ahem) cleaning up Tromaville, which is like a bargain-basement Gotham City, and just as full of eccentrically-dressed ne’er-do-wells.

I wouldn’t say that this film necessarily carries a ‘green’ message – although the toxic waste is very green – but it certainly believes in recycling its own footage to make up the running time. This is especially notable in a romantic montage sequence covering the central relationship between the ‘monster hero’ (not yet routinely referred to as The Toxic Avenger, let alone Toxie) and a blind woman. Set to a ghastly piece of 80’s tat called Body Talk this not only dwells on the lovers holding hands and laughing at silly jokes, it also recapitulates quite a few of the murders. It goes on for so long that the music comes to a natural end at one point and has to be cranked up again.

The triumph of The Toxic Avenger is that it brings extreme gore to the superhero movie, which is exactly where it belongs. After all, how could a superhero not be a psychopath? This film isn’t big on psychological realism but it evokes the dichotomy in the monster’s personality neatly enough through the contrast between his blandly reassuring (dubbed) speaking voice and his habit of deep-frying criminals’ hands.

In the end Tromaville’s corrupt mayor (Pat Ryan) calls out the army to despatch the monster hero, but his Mum stands in the way. The mayor is partially-eviscerated and all ends happily with no immediate plans for a sequel – apparently this only emerged when producer-director Lloyd Kaufman was apprised of rumours of its existence at Cannes and decided he might as well make the fucking thing. I haven’t seen it, but at least this approach makes a nice contrast to that taken by the makers of certain other films starring certain other (non-Toxic) Avengers – films which seem barely to exist in their own right they are so concerned with anticipating further product. Not that I’ve seen them either, but such is my understanding.