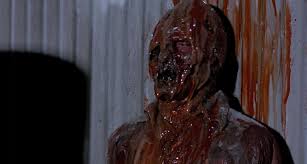 Arrow Video keeps up the good work of supplying us with pristine transfers of films that possibly don’t deserve it with this DVD/Blu-Ray combo of William Sachs’ 70’s creature feature. ‘Alex Rebar as the Incredible Melting Man’ the opening credits say, denying Rebar’s character (‘Steve West’) his identity from the very start. But perhaps this is an acknowledgement of the fact that Rebar is better at melting than acting – which does seem to be the case, judging by his delivery of virtually his only line: ‘Magnificent! You haven’t seen anything until you’ve seen the sun through the rings of Saturn!’

Having seen the sun through the rings of Saturn astronaut West collapses into an unfortunately rather comic seizure and is taken back to earth where he proceeds to do what it says on the tin, swiftly becoming an object of pity and disgust. But mainly disgust.

Escaping from the hospital that’s treating (and imprisoning) him, he sets about stumbling slowly through the surrounding countryside, smearing himself against windows, leaving bits of himself in trees, and eating people. His dissolution is visualised by make-up artist Rick Baker and his team with a level of detail not to be found elsewhere in the film. The script is barely there and the performances are distinctly wobbly, suggesting a world of unstable identities – a state which the melting man seems to embody, in as much as a melting man can embody anything.

In a bid not to alarm the populace the search for West is limited to a mere two people, Dr. Ted Nelson (DeBurr Benning) and General Michael Perry (Myron Healy), and they don’t seem to be trying very hard. Seeming more depressed than galvanized by Steve’s escape and bloody rampage through the countryside, they are easily distracted from the task in hand by such domestic concerns as the immediate availability of crackers and whether ‘Mother and her friend Harold’ are coming to Nelson’s house for dinner. (The answer is no: they would have done, except they stopped off to steal lemons and got eaten by Steve West).

The chief domestic concern is Nelson’s wife Judy (Ann Sweeny), who is pregnant for the third time (the first two having ended in miscarriage). Nelson hopes ‘this business doesn’t screw things up’, as he rather bluntly puts it. It may seem distasteful to try to build suspense out of the possibility of the heroine miscarrying, but then we are in a film where the protagonist at one point leaves his ear (‘Oh God it’s his ear.’) dangling from a tree. And were a movie monster specifically recruited to represent the Spectre of Miscarriage, this gloopy half-formed mess could well be it. Sorry.

It is Judy who, normally a passive character (possibly because sedated by her husband, which does happen at one stage) finally expresses what everyone is thinking: ‘I’ve never seen such a feeble excuse for a search in my life!’ The search is then stepped up, although by this time the monster is in the garden anyway (yet still managing to elude detection).

In one scene of electrifying banality we see Judy knitting while the melting man stands outside on the lawn, dripping and staring at the house. It’s the best scene in the film, better even than the one where we watch the severed head of a victim float downstream and over a waterfall. Did William Sachs intend the weirdly affecting contrast between the woman knitting and the man unravelling? Are we meant to infer that the two have been lovers at some stage, or even that the baby is his?

I think it’s enough that I have been moved to ask these questions.

In fact what seems to be the looming confrontation between Judy and the melting man never happens and the film unwisely, and at a late stage, decides to introduce two new potential victims, one of them played by Jonathan Demme, who went on to direct (arguably) better movies.

The film perks up again at the end, when Steve demonstrates a spark of humanity by saving Nelson from a fall, only for the two of them to be confronted by trigger-happy cops. ‘Listen to me I’m Dr. Ted Nelson!’, screams the hero in a sudden bold spasm of identity that defies the pervading atmosphere of dissolution but only earns him a bullet in the head. The cops are duly eaten and the melting man sits against a wall and melts further, until he’s just a puddle of damp clothing which is duly binned by a janitor.

Yes it’s a bleak vision of the human condition, and made all the bleaker by the scene’s being intercut with a second rocket launch. Because it seems that NASA isn’t going to let the fact that one astronaut turned into a deliquescent ghoul (and the others died) get in the way of sending a second crew to have a look at the sun through the rings of Saturn – after all, you haven’t seen anything etc. etc. There seems to be no hope for humanity at all, except perhaps in whatever Judy is knitting.

Not that we ever find out if she finished it. This is not a film that answers many questions, or even gets round to asking them in the first place. We don’t know what causes Steve’s liquefaction, or why he ‘gets stronger as he melts’ as the hero suggests. (Of course a movie monster that got progressively weaker as the film went on would only have led to box office disappointment).

William Sachs claims that he intended this as a comedy but kept meeting with resistance from the producers. From such artistic struggles are masterpieces formed; and this also. If Sachs had got his wish and made a comedy it wouldn’t have been half as funny as this is – similiarly a straightforward horror piece would have been insufficiently grim. The film takes its cue from its hero: it has no coherent face, and therein lies its terminally awkward charm.