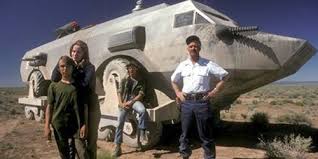 Given Roger Zelazny’s reputation as an SF writer I can only assume that this is a bowlderized version of his 1969 novel. The very fact that it’s showing at 8:00 of a Saturday morning on the Horror Channel suggests that it may not be very challenging. Still, I’ve set the washing machine in motion and I’ve returned to bed with a cup of tea: let’s give it a go.

The denizens of a military facility in the desert seem curiously untroubled by a nuclear holocaust in director Jack Smight’s film: Major Eugene Denton (George Peppard) continues with the routine activities of ‘the service’ while rebel Tanner (Jan-Michael Vincent) drops out and spends his time swigging Jack Daniels from the bottle and riding around on his motorbike (carefully avoiding the giant scorpions). OK, they miss women and trees but they seem pretty happy, until a lit cigarette falls onto a girlie magazine and the place blows up.

The four survivors set off into the desert – following a signal from Albany, New York – in ‘Landmasters’, modified troop-carriers which are clearly the film’s USP. Observe the boyish glee on Tanner’s face as Denton permits him to take the wheel for the first time and you have just plumbed the emotional depths of this film – it’s the end of the world as male-bonding exercise. The ‘tension’ between ‘authoritarian’ Denton and ‘rebel’ Tanner never gets much further than mild flirtation.

The dangers of Armageddon are parcelled out mechanically during the journey – they include storms, killer cockroaches, and grizzled outlaws who look like they’ve been there since 1852. But it’s not all doom and gloom – they find Janice (Dominique Sanda), a nightclub chanteuse who at the very least serves to demonstrate that the death of civilization is no excuse for a woman to let herself go, and later comes in handy for screaming at things. They also find a boy called Billy (Jackie Earle Hailey) who initially throws stones at them before giving in and taking his place in this post-nuclear family.

Keegan (Paul Winfield), the black guy, makes it to about halfway through the film before succumbing to the cockroaches, but considering he’s already survived a nuclear holocaust, this is pretty good going I think.

There’s one interesting scene just before Denton, Tanner and Keegan discover Janice. Entering what they think is an abandoned casino, they start playing the slot machines and rapidly become engrossed, as the soundtrack starts to evoke a crowded room, with people talking, laughing, and winning. It’s as if the machines are summoning up the old world, and when it stops, Janice appears. There’s a faintly mysterious air to all this, not present in the rest of the film, but there’s probably nothing to it: maybe it’s just saying that these guys have really hit the jackpot in finding this undamaged hot chick.

(Damnation Alley itself did not hit the jackpot. It was expected to. Fox had two SF blockbusters scheduled for release that year and the other one was seen as the likely flop. It was called Star Wars. So perhaps in this scene what we are really hearing is the distant sound of George Lucas reaping the rewards that, in a parallel universe, might have been DA‘s.)

Perhaps the most striking feature of Damnation Alley is what some opening bumf calls the ‘lurid, angry skies’ that glower over this post-apocalyptic landscape. The special effects in this are generally terrible, even for a 70’s film (even, at times, for a 50’s film) but these skies are pretty. Giant scorpions notwithstanding, radiation doesn’t seem to be such a big deal here. Possibly there’s a logical reason for that, aside from the fact that radiation poisoning isn’t a good look – but if so I have no idea what it is. The big problem appears to be that the blast has ’tilted the world on its axis’, though we’re told it might tilt back again, who knows?

Maybe it does, because at the end Tanner, Denton, Janice and Billy make it to Albany, where everything seems fine. The skies are blue, with fluffy white clouds, and the streets are thronged with laughing children who come out to surround Tanner on his motorbike, and eat him.

No (SPOILER ALERT) they don’t eat him, but if they had it would have gone a long way towards redeeming the rest of the film. As it is, it’s like the apocalypse never happened. Disappointing, or what?