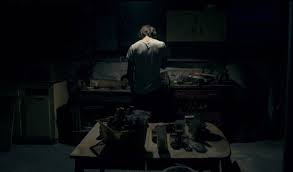 Over Your Dead Body

The vexing question of what to see and what not to see at these festivals often results in me scouring the internet for reviews from other festivals. It didn’t do me a lot of good in this case since I found two reviews for OYDB, one of which claimed that this was a triumphant leap forward for director Takashi Miike, while the other dismissed it as ‘boring’.

As usual in these cases, the truth lies somewhere in the middle. This is Miike’s take on a classic Japanese play, previously filmed as The Ghost Of Yotsua, and has performers in a stage version finding it increasingly hard to separate the events of the play from their own lives. And no wonder, since the hero is in a relationship with his onstage wife and having an affair with the actress playing his lover. As the ‘wife’ grows increasingly anguished and unbalanced and the ‘husband’ more callous, the resonances between fiction and reality prove less than subtle. The slow burn is not really Miike’s forte – he makes the events of the play interesting visually but misses the emotional depth that can make the theatrical cinematic without the need for eye-catching flourishes.

The heroine’s attempted DIY abortion (although she isn’t pregnant) feels like an uneasily sudden lurch into the grotesquerie for which Miike’s work is renowned – however, as we get towards the end things get weirder and the film’s increasingly disorienting shifts between the world of the play and the actors’ lives do manage to evoke something of the desired delirium. The ending is sly and mordantly funny, and almost made me want to see the whole thing again. Not quite a triumph, but not dull either.

I’d only decided to see this at the last minute to fill a gap in my schedule but I was oddly mortified to discover, as I tried to buy a ticket, that it had sold out, and that therefore I would be prevented from seeing this film that I never especially wanted to see in the first place. However, a nearby cellist (one of six on the soundtrack to Road Games) had a spare ticket to sell, so I bought that, by now almost excited to see what all the fuss was about.

As we waited for the film to begin a man in the row in front of me turned to ask, almost accusingly: ‘Are you involved in this production?’ I pointed to the cellist beside me in something like panic. He then indicated a man in the row ahead who was, I think, the music supervisor, and I don’t know what happened after that. At any rate, the film started.

An English hitchhiker (Andrew Simpson) with a murky back story wanders through the French countryside, and teams up with a woman (Joséphine De La Baume) who warns him that there’s a killer on the road. An older guy picks them up and takes them back to his country house where his wife – yes it’s Barbara Crampton again – awaits them. She’s not at her best here and seems a bit distracted, but maybe that’s just because her character is.

Frédéric Pierrot as the husband offers the finest performance, clearly enjoying himself as he channels a kind of is-he-a-maniac-or-is-he-just-French? vibe. The film keeps the tension between the characters simmering for quite a while, everyone becoming a suspect; however, as the suspicion I’d had early on that I’d guessed the Big Twist began to grow into certainty my enjoyment steadily diminished until, by the time the young couple were being chased round a small haystack by a small car in the slightly ludicrous climax, I wanted the games to end.

There was a show of hands in the Q&A as to who guessed the twist, and I was far from alone, but director Abner Pastoll suggested that even if you had guessed it it was still possible to ‘enjoy the ride’. Which is true to an extent, though the film is a long way from his cited influence Chabrol, except geographically.
Your Vice Is A Locked Room And Only I Have The Key (1972)

This was the premiere of Arrow Video’s remastered version of this Sergio Martino giallo. Possibly they hadn’t quite finished remastering it since the film ground to a halt about ten minutes before the end and resisted attempts to get it going again for a considerable time. This kind of thing only ever seems to happen in the Prince Charles, where I now was.

Eventually it was restored to the screen again, with an extra layer of suspense added – would we make it all the way to the end? It may be that the film needed it – this tries to incorporate Poe’s The Black Cat into a giallo scenario, with a result that often resembles a giallo that keeps cutting away to close-ups of a black cat without building much tension around it. But the giallo as a genre is so obsessed with style that it verges on the abstract anyway, becoming a sort of artefact that one can admire without necessarily getting too emotionally involved, and in this case the inhumanity of the characters (and I include the cat) chimes in nicely with that cold-blooded approach, giving the whole thing a certain fascination.

Luigi Pistilli is a novelist whose only pleasures in life since his inspiration dried up are filling the house with free-spirited young people and tormenting his wife (Anita Strindberg), often at the same time. Enter his niece (Edwige Fenech), another free spirit, which she demonstrates by seducing her uncle, her aunt, and the delivery boy. Only the cat seems to escape her attentions, maybe because it doesn’t have any money.

A couple of murders occur, though the question of who is responsible seems almost academic in this context, where anyone seems capable of anything. Perhaps the film’s great perverse triumph is in showing Strindberg being beaten, raped and humiliated by her husband but still contriving to make her, ultimately, the villain of the piece. No-one does misogyny like the Italians.

Also filling a gap, this Spanish horror-thriller from director Adrián Garcia Bogliano has hard-working, apparently meek accountant Aram plotting, with characteristic attention to detail, an uncharacteristic act: the kidnap of a schoolgirl. There is method to his madness and most viewers will have worked out his motive before the ‘twist’ is revealed, one area where the mechanics of this film falter a bit. And mechanical is the word, especially as regards the characters.

I could just about swallow the seemingly anal and conflict-averse Aram embarking on such a risky strategy but the effect of the kidnap on the young girl – turning her into a violently murderous psychopath – seems so wildly out of proportion to the trauma she endured that it all feels drably mean-spirited. Though I have to admit that the film passes the time easily enough if you adopt a mindset more appropriate to EC horror comics and the giallo (though it doesn’t look as good as either of those) and I suppose looking for humanity at a festival where people are routinely torn to pieces (just onscreen of course) is futile.

Or then again maybe not – in Perry Breakshear’s film two old friends, Christian (Evan Dumouchel) and Wyatt (MacLeod Andrews) meet up in New York. Both have split up with their girlfriends – Christian because he caught his having sex with someone else and Wyatt because he believed his partner had been taken over by a malign alien force. As Christian discovers after he takes Wyatt in, this is something of an idée fixe with him. Wyatt is anticipating a war between what remains of humanity and the creeping alien menace, a war which is likely to start any day now and for which he has already started to make preparations in the building’s basement.

This being Frightfest there are only two ways this can go: either (a.) he’s right, or (b.) he’s wrong but his misguided belief results in him killing a lot of people. That this finds a third way, yet still manages to be genuinely frightening, makes it something of a triumph. It finds horror enough in Wyatt’s schizophrenia, delineating his hallucinations with economy and real power. And then there’s Christian’s decision to humour his friend’s delusions, participating in them in the hope of arriving at a cure: don’t try this at home folks.

You could argue that the film is naïve about schizophrenia in even suggesting that it could be susceptible to a home cure, but it’s also Christian who is being naïve. More than that, Breakshear – in an ironic counterpoint to Wyatt’s delusions – has Christian listening obsessively to voices in his head too, in his case a self-help CD assuring him that he is ‘a mountain’. By this means he hopes to create himself a new personality that will help him ‘dominate’ in the workplace; in fact, his new self is so unpopular he gets laid off by the boss (Margaret Ying Drake) he was hoping would be his new girlfriend.

Everyone here not only looks like people, they act like people too, and the result is moving as well as frightening – had he stayed around, the ending might well have unblocked Dave’s tear duct all by itself. It took the whole of the festival to discover a film that rivalled The Rotten Link in quality, but here it was. I wish it well.