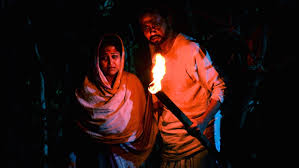 Indian horror films are hard to come by – and this isn’t one either, or not exactly. Nevertheless, Kothanodi (it means ‘river of fables’), a compendium of four interlinked folk tales from Assam, is almost grim enough to qualify. In the most optimistic of these tales three babies are buried alive. Oh OK then, that’s the second most optimistic – in the most benign a woman is constantly pursued by a rotund vegetable that seems to think she’s its mother. And so she is.

I could have watched that vegetable rolling inexorably along after her all day. Something about it evoked the magical possibilities of cinema more than any number of CGI-driven spectacles – although, yes, they did use computers to edit out the fishing line pulling it along. There’s something here of that unquestioning acceptance of the extraordinary you get in the films of Thai director Apitpatchong Weerastheekul (whose Cemetery of Splendour is also showing at this festival) though Bhaskar Hazarika’s approach is more straightforward than that of the enigmatic AW. Here, the perversity is all in the tales themselves: there’s a memorably nasty wicked stepmother (Zerifa Wahed) and a girl who for complicated reasons (but reasons nonetheless) is being married off to a snake by her mother (Seema Biswas).

In what we are told is the London Film Festival’s ‘year of the strong woman’, it’s interesting to note that the main characters, whether victims or villains, are all female, though there is a sense of men pulling the strings, particularly in the buried babies story, where a couple are advised to kill their kids by the man’s wise old uncle, who always knows where the best fishing is to be had so must be right about this too, mustn’t he?

Though it is set in the distant past Kothanodi has a starkly modern feel – it’s brutal, with a suggestion of black humour, but not unsympathetic. Magic exists, but you can’t count on it. The tales marry up very nicely and Amarnath Hazarika’s music – using traditional instruments – is atmospheric. It left me wanting more – however, according to the co-producer, present at the ICA (whereas the director wasn’t granted a visa), Hazarika’s next film is apparently going to be an adaptation of four tales by Poe. I can’t wait for that to see the light of day. Who knows, I-Horror could be the new J-Horror – they might even let him out of the country then.