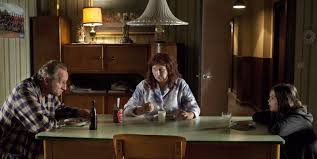 Jaco Van Dormael’s film might end up being remembered as the one where Catherine Deneuve sleeps with a gorilla, but that’s the least of it.

Benoît Poolvoorde is God, a middle-aged slob who never leaves his apartment and spends most of his time on his computer, visiting the Laws of Universal Annoyance (for example: the ideal amount of sleep is ‘ten minutes more’) upon his creation. But he is himself subject to annoyance by his ten-year old daughter Ea (Pili Groyne), who buggers up his creation (and his computer), releasing the date and time of death of everyone in the world, before exiting the flat via the washing machine.

Emerging in Brussels, she has little trouble rounding up a further six disciples to add to the original twelve (even if her reference to her brother ‘JC’ creates some initial confusion with Jean-Claude Van Damme). If the disciples are a bit…eccentric, that might because the knowledge of the exact time and date of their deaths has sent everybody in the world a little crazy – there’s a murderer, a porn-obsessive, and the unhappily married Deneuve with her new-found enthusiasm for the great apes.

Meanwhile God, unable to restart his precious computer, goes out into the world in pursuit of his daughter, but proves such a disappointment in the flesh that a priest beats him up and gets him deported to Uzbekistan. Meanwhile his placid wife (Yolande Moreau) accidentally gets the computer going again by switching it off and on again.

This is nicely in keeping with those Laws of Universal Annoyance which help to ground this fantasy in everyday banality – just as those clocks counting down to the characters’ death-dates keep the whimsy on ice with a frisson of existential terror. Which isn’t to say we’re denied a happy ending, as God’s wife takes over the running of the world, ushering in a benevolent new order and affirming, in no uncertain terms, the claim that this is the London Film Festival’s ‘year of the strong woman’. Inventive, funny, and moving, The Brand New Testament – released in the UK next March, I think the director said – could be the feelgood arthouse hit of Easter 2016.