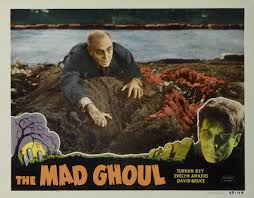 Director James Hogan’s film begins with an unusually delicate situation for a mad scientist flick – the heroine Isabel (Evelyn Ankers) has fallen out of love with the hero Ted (David Bruce). Isabel confides this melancholy fact to Dr. Alfred Morris, Ted’s chemistry lecturer, with the unforeseen result that he thinks he’s in with a chance. Although as he’s played by George Zucco, it’s pretty clear that that he’s the villain, and therefore unlikely to get anywhere – even if he weren’t old enough to be her father.

Not that there isn’t a vacancy in the role of hero, since there’s a definite feeling that Ted has been demoted. Unaware that Isabel has rejected him (she can’t bring herself to tell him), he continues to pursue her like an eager puppy and becomes such a pathetic creature that, when Dr. M exposes him to a Mayan gas and turns him into a zombie, this only seems to confirm his loss of status.

The gas has previously been used to induce death-in-life (or is it life-in-death?) in monkeys. But they just lie there twitching, which is no fun at all.

Ted, however, becomes a haggard but biddable creature, following Dr M around graveyards and desecrating corpses in order to secure the hearts that are for some reason the only cure for his condition – a temporary cure, meaning that this is what his life is going to look like for the foreseeable future.

It isn’t a happy prognosis, and God knows what medical science gains from it, but it makes a nice metaphor for unrequited love – shambling around the countryside on the loved one’s trail (she’s a well-known singer on tour), subsisting on dead hearts. It doesn’t hurt that Ted, like the film itself, isn’t remotely frightening.

In fact the combination of Grade Z schlock with high end production values (and a decent cast) makes this seem like a sophisticated parody played dead straight, as (in a perverse way) does the fact that Dr. M bumps off the ‘official’ comic relief, Robert Armstrong’s wise-cracking reporter – who is impersonating a corpse at the time, funnily enough. There’s a certain mischievous glint in Zucco’s eye that seems to confirm this idea. Maybe he’s the hero after all – certainly his nearest rival, Isabel’s accompanist and new beau Eric (Turhan Bey) seems too marginal and diffident to qualify.

And the final image is not of the lovers embracing but of Dr M (now himself a zombie) expiring as he scrabbles at grave dirt in a last ditch attempt to dig up a corpse, while the hollow voice of Ted (now dead) appears on the soundtrack, reiterating an earlier speech to Dr. M to the effect that it’s all over – nothing left now but ‘you, and me, and death’.

‘You and me and death’ – that’s what it all boils down to in the end: no romance, no (overt) comedy. No great tragedy either – rather the overall impression we are left with as the end credits roll is that a curtain has fallen over certain sordid events best left buried. Primarily this is a film about disappointment. But not a disappointing film – I’m glad that Odeon Entertainment, from whom this DVD comes, have dug this up again for our viewing pleasure.