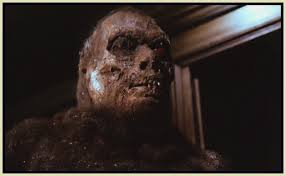 Ever since I was a child it seems to me that the BBC has been showing Eugenio Martin’s Spanish horror film Horror Express in a late night slot at regular intervals. This kind of reassuring continuity is exactly what I pay my licence fee for. If I had it on DVD I probably wouldn’t watch it half as much – I mean, it isn’t that good.

But there’s something about it – maybe it’s the way it manages to cram such an enormous amount into its brief running time, just as it manages to fit a huge variety of characters on one train (well it is the Trans-Siberian Express circa 1906). Not only do we get Christopher Lee, Peter Cushing (as two rival academics) and the missing link recovered from the frozen wastes of Manchuria – there’s also Mata Hari, Rasputin the Mad Monk (not named as such but they might as well be), and Telly Savalas, playing a Cossack. TS might be one passenger too many – his appearance coincides with that point where the film starts to go – as critic Philip Strick put it – ‘off the rails’, and I started (it was late) to fall asleep, coming alive every now and again to be confronted by bleeding-eyed zombies milling about in confusion.

Up to this point, however, I was alert to and appreciative of the film’s treasurable pragmatism in the face of sheer absurdity. Scientist Lee only has to discover that his man-size fossil has gone astray, and a corpse substituted in its place, for him to conclude, in a remarkable turnaround from his previous position, that it is alive. It is as though he understands that under the circumstances there’s no point in wasting precious running time on rational explanations; Lee’s brusque incarnation of no-nonsense Britishness helps him get away with this. Though ‘no nonsense’ is perhaps not quite the right phrase.

Later the creature’s optical fluid (eyewash?) is found, when examined under a microscope, to hold images of things it has seen, like a brontosaurus and the Earth from space. Wait a minute, how can the missing link have seen the Earth from space? Another logical leap is required and Lee’s professor is not afraid to make it – clearly the creature has been possessed by an alien intelligence!

He’s not wrong. The creature, red eyes aglow, is wiping passengers’ brains of their accumulated memories and taking them upon itself – this is how it learns to whistle the haunting theme that plays over the opening credits: it has picked it up from the mind of a porter, whose brain is now wiped smooth. Did you know that the grooves in a brain’s surface are caused by the recording of experience onto the grey matter? Neither did I. This exciting insight is in any case lost when the train crashes, along with all the other extraordinary scientific breakthroughs the film has alerted us to. Meanwhile my brain feels like it has been wiped smooth too – though it might just be sleep catching up with me – in preparation for the BBC’s next showing of Horror Express in 2018. Probably.