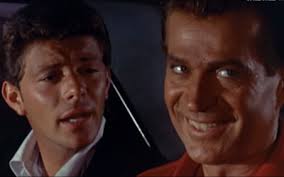 The notional ‘million eyes’ belong to her followers. Sumuru leads an all-female organisation bent on world domination and the ushering in of a new age of ‘peace and beauty’. ‘Beauty’ is key: her followers are chosen largely on the basis of their good looks – Sumuru has soldiers and a ray gun that can turn people to stone, but her headquarters resembles a finishing school, where girls sit around looking decorous in matching outfits and don’t seem to do very much of anything at all. Although in an early scene they are observing the struggles of an Oriental man caught between the thighs of one of their number. Is he paying for this treatment? you wonder. Apparently not – except maybe with his life.

Ed Naha, in the book Horrors: From Scream To Screen describes this film thus: ‘Large-breasted women love to torture men in their rituals.’ This has the curious distinction of being totally misleading, like he only saw the poster, and yet also strangely accurate.

Essentially, this is a light-hearted sexy spy romp, or that’s the plan. The plan falls apart, just like Sumuru’s plan for her women to seduce the world’s most powerful men. Her ambitions are thwarted by the inability of either her or any of her followers to resist the manly charms of CIA agent Nick West (George Nader), whose patronising refusal to take Sumuru’s plotting seriously is precisely what they should be fighting against. Instead, they can’t seem to stop themselves from leaping into his arms. Women!

It might be more believable if they were leaping into the arms of his partner Tommy Carter, played by top-billed teen heartthrob Frankie Avalon rather than into the comparatively wizened arms of West, but Avalon seems to be taking a back seat. In fact he seems a bit puzzled as to what he’s doing in the film at all, a confusion at one stage profound enough to make its presence felt in the script. While waiting for one of Sumuru’s acolytes to disrobe – and thus prove that she has no weaponry concealed about her person – Avalon muses: ‘I wonder if this is where I’m supposed to sing’, as if he thinks he’s still on the set of Beach Blanket Bingo (1965).

Sometimes it’s hard to tell what’s a joke and what isn’t. At one stage the corpse of a woman lands up in Nader’s hotel bedroom. Avalon asks if the woman is indeed dead, and Nader says either that or she’s ‘a damned good actress.’ This last, needless to say, is unlikely.

Shirley Eaton as Sumuru seems mostly intent on keeping her dignity intact, and almost manages it, though her habit of flashing her eyes to convey fury or psychopathic mania, or something, doesn’t work at all. George Nader maintains a cheesy grin and an annoyingly arch manner throughout while delivering his laboured one-liners. His ironic detachment from events suggest someone trying to disown his own performance even as he delivers it. Frankie Howerd might have pulled it off, but Nader flounders.

Meanwhile Avalon might as well be playing himself – the late revelation that he is in fact a British agent posing as an American (he worries about his ‘dreadfully awful’ American accent) is another little joke that sees the film not trying very hard to cover up the fact that it’s not trying very hard. Indeed it almost seems to revel in its inadequacies.

Wilfrid Hyde-White darts in and out as a British diplomat, seeming not so much to be enjoying himself as enjoying the fact that he isn’t in this very much, while Klaus Kinski makes an appearance as President Boong of ‘Sinonesia’ (he was in a lot of crap before he met Werner Herzog). His curious bluish make-up job makes him look recently deceased but I can only suppose that this look is authentically Sinonesian. It suits him when he gets turned to stone, although it isn’t real Boong who gets turned to stone, it’s his double – the real Boong then appears from a backroom in a ridiculous wig.

The action shifts from Rome to Hong Kong but the story’s events barely coalesce into a plot. West is captured by Sumuru but seems weirdly reluctant to escape, claiming that he needs to ‘keep her happy’, as if he was married to her or something. Finally it comes down to this: West, stripped to the waist, tied up and whipped by Sumuru. It’s like this was what the whole thing was really about after all, a desperate froth whipped up to conceal a sado-masochistic fantasy, though in the event it doesn’t hide anything at all: instead the oily bubbles burst, leaving a scum you can see through. And there’s a weird fascination in that.

Sumuru’s island stronghold is finally breached by Avalon leading the Hong Kong police force in an armed assault. Having successfully ‘rescued’ West from yet another amorous clinch, this time with one of the guards, they leave, Avalon observing that there is enough explosive in Sumuru’s armoury to ‘turn this volcano into an island’. Huh? Doesn’t he mean ‘island into a volcano’? Is this a joke? A fluffed line? Maybe it’s some kind of distancing technique, but one where the intended effect is not to alienate the audience so much as to evoke the distance director Lindsay Shonteff and everyone else involved wished to put between themselves and the film.

Perhaps there is a thin line between not taking yourself too seriously and just giving in to despair. If so, this film is set on that border.

Nevertheless it hasn’t gone away, thanks to Freeview channel Movies4Men, whose surprising commitment to the feminist cause, as displayed earlier in Death Car On The Freeway, here celebrates the kind of feminism which is, basically, for men. And of course by men – the ultimate mastermind behind this seems so be Fu Manchu author Sax Rohmer, on whose work this dreadfully awful but oddly watchable film claims to be based. I have to admit, I saw it twice. But only because first time round, I couldn’t quite believe it.