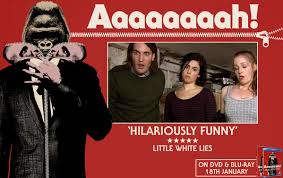 Two men (Steve Oram and Tom Meeten) who only communicate in ape-like grunts, are in the woods mourning the passing of a loved one (we assume) by pissing on a framed photo of her. That done, they set off into the city, to bring (so we might imagine) their primitive ways to bear on civilization as the credits come up.

Except ‘civilization’ has already succumbed and apish behaviour coexists with the world of flat screen TV’s and self-assembly furniture (and a cushion the double of one I myself bought in Wilkinson’s). In one such household we find Julian Barratt living in the garden, having been displaced as head of the family due (fundamentally) to his inability to repair the washing machine – the usurper being the washing machine repairman (Julian Rhind-Tutt).

As the occupants of the house grunt and chatter, throw food, and watch an ape-language take on Nigella that’s almost as disturbing as the real Nigella, Barratt appears at the back door looking sorry for himself, to be handed a consolatory Battenburg by his daughter. When the two interlopers from the woods crash a house party, however, the balance of power shifts again and things get seriously violent.

Steve Oram’s film successfully carves out its own space somewhere between troubling arty experiment and gleeful mischief-making, and Barratt and Toyah Wilcox in particular make great apes. But I couldn’t quite stop myself wishing I’d been able to read the ‘brilliant, nuanced script’ alluded to in the DVD extras – the one they apparently tore up and replaced with ape-speak. Maybe my nostalgia for that ‘lost’ script is part of the intended effect – it’s an artefact of a civilization that has also been lost, or never existed.

Then again, maybe that’s reading too much into a film in which Noel Fielding gets his penis bitten off.