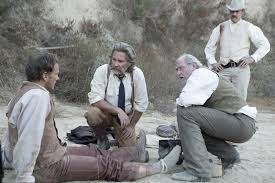 There is, or there was, a ‘projection issue’ in the Curzon Bloomsbury’s Phoenix Screen. A sheet of A4 paper warns you of it just before you go in – though after you have paid for your ticket. It doesn’t make it entirely clear, or maybe I didn’t read it closely enough, just what the issue is. Would the film be projected onto the floor? Directly into my face?

As it turns out, the ‘projection issue’ is a small red dot in the upper half of the screen. It is surprising just how irritating a small red dot can be. At times it seemed to catapult Bone Tomahawk, which is already straddling two genres (horror and the Western) into a third – science fiction. Sometimes the red dot impersonates a distant alien star on the horizon; sometimes it’s the laser sight of a sniper (from the future) taking aim at the actors’ hats.

Around the adventures of the small red dot it was, however, possible to make out an excellent film, in which Patrick Wilson plays a man laid up with a broken tibia whose wife Samantha (Lili Simmons) gets kidnapped by a tribe of cannibalistic troglodytes. He sets out, on crutches, in the company of Kurt Russell’s grizzled small town sheriff (given to the lazy habit of shooting suspects in the leg), Richard Jenkins’ eager if decrepit ‘back-up deputy’, and Matthew Fox’s arrogant Indian-hater, to rescue her. Their quest moves at a leisurely place, but the interplay between these well-drawn and well-played characters is beguiling enough that this is a pleasure, and first time writer-director S Craig Zahler has crafted some witty and authentic-sounding dialogue.

It’s the rescue party’s plausible weaknesses that make them sympathetic. The film is, for example, very attentive to the hero’s pain as he limps along the trail, and this is a sign of its humanity – though it also makes the one moment of outrageous gore towards the end all the more effective. Perhaps it’s a shame that the film couldn’t extend the tiniest bit of its humanity to the cannibal tribe – the fact that they are ‘not Indians’ is stressed in a slightly embarrassed way, which doesn’t stop the film coming across as a throwback to the days when Indians were nothing other than the enemy. While in contrast to the tribe’s treatment of their women (kept immobile, pregnant and blinded, with corks shoved in their eye sockets) our medically trained heroine is a little too modern for the era I thought, though at least her feistiness results in a refreshingly tart greeting for her rescuers (‘You’re idiots!’).

That’s a bit strong, but their idiocy, such as it is, is a big part of what makes us care about the characters. Caring can be hard work, as the second film in my self-imposed double bill, Chronic, showing at the ICA, makes clear. Here Tim Roth plays David, a carer whose terminally-ill patients seem to fill an emotional void in his existence – his strangely disinterested neediness does not necessarily make him bad at his job, even if a lot of the people around him seem to think it does (he is at one stage sued for sexual harassment) – and maybe it even makes him better at it, it’s hard to say. Does he care too much? Not enough? And, moreover, did I care?

Director Michel Franco’s distanced approach allows all kinds of ambiguities to flourish. Franco seems to cut away from David’s manipulations of a woman patient’s body in the early scenes at just the point where they could be turning into something sexual; a girl David seems to be stalking turns out to be his daughter. Roth’s fine performance is determinedly opaque throughout.

If I was left with a feeling that something was missing here, maybe that was an appropriate reaction to the subject. Or maybe something was missing – a sense of humour, as suggested in the Sight and Sound review? A projection issue? I had no sense that the film was building to anything – but then it turned out that it was: in fact the ending comes as a bit of a shock, though it too raises a lot of unanswered questions.

But maybe the problem was indeed a projection issue, though not of the kind represented by a small red dot. Generally one projects oneself into a film through identification with a central character, which is problematic here. Even as he is our entry point into Chronic, David stands in our way. More than that, there’s a sense in which he takes our place. Is he not like an art movie buff drifting from one misery-porn scenario to another, sympathetic but never fully involved? Can it be a coincidence that the only films we witness David watching are pornographic (jokily described as ‘art’)?

Or maybe David is standing in for Franco – (physically) manipulating the characters and using them for his own ends. Either way, he comes to represent the coolly mechanical aspects of the film, the way it works, or doesn’t – and perhaps the high-impact ending suggests Franco’s attitude to these. (It might also suggest that he does have a sense of humour after all.)

So in questioning David’s motivations perhaps we should also be questioning our own. And if the film left me a bit cold, well maybe I am a bit cold. I used to have this idea that art movies reaffirm our humanity because they allow you to inhabit people’s lives without the usual plot contrivances and heavy-handed music cues getting in the way, while mainstream and genre films are more mechanical. With these two films, the opposite seems to be the case.

You live and learn.