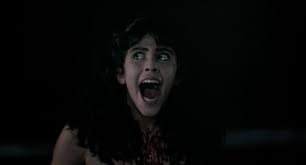 This was prefaced by a talk from BFI programmer Michael Blyth around LBGT horror which pleasingly focused on less obvious titles – The Ghost Ship, Homicidal, Alucarda – even if he did seem to be stretching a point sometimes. Passing allusions to Dr. Jekyll And Mister Hyde and I Was A Teenage Werewolf suggested that anybody who transformed into anything else must necessarily be ‘coming out’. (Of course there’s Dr. Jekyll and Sister Hyde, but then he seemed a bit down on Hammer). Anyway, he was entertaining, and he was not so insensitive as to pick apart the main feature in advance of the screening.

In Sleepaway Camp, Ricky (Jonathan Tiersten) and his cousin Angela (Felissa Rose) are packed off to summer camp by his transparently deranged mother (a very strange performance from Desiree Gould), only for Angela to become an elective mute on arrival – and, moreover, one who refuses to participate in team sports. Whatever her problem is, it’s only made worse by the unwanted attentions of the camp cook (an unapologetically enthusiastic paedophile), bullying jocks (some in crop tops, all the better to reveal their hairy washboard stomachs) and Ricky’s girlfriend, or maybe ex-girlfriend, who has apparently ‘matured’ in the past year, and now looks about thirty-two (and judging by her performance, thinks she’s in a John Waters film).

It is, we begin to think, no coincidence that these same people start to meet with nasty ‘accidents’ – a vat of boiling water falls on the cook, wasps sting a jock to death while he’s on the toilet, and the girlfriend falls victim to curling tongs thrust where no curling tong should rightly go (by that stage the ‘accident’ theory has been pretty much discredited.)

The camp owner Mel (Mike Costin) seems to think Ricky is responsible for the mayhem, but then he does look to be in the early stages of Alzheimer’s. Meanwhile Angela, in spite of her travails, has warmed up a little due to the attentions of Ricky’s friend Paul, though she doesn’t like him getting too physical.

There is, it transpires, a good reason for this: Angela has a secret penis. She is really cousin Peter, taken in by her aunt after her family was wiped out in a speedboat accident and raised as a girl on the aunt’s crazed whim – she decided that as she already had a child of one sex (Ricky) this one should be female. It’s really quite remarkable, all things considered, that Ricky has turned out so very normal.

Beyond his unconventional upbringing, the film doesn’t feel the need to give us any explanation for Angela/Peter’s psychotic rage, although some ‘supporting evidence’ is offered in the form of a flashback to Peter seeing his Dad in bed with another man. Does Peter welcome Paul’s sexual advances on some level, or is he merely repulsed? Such niceties are rendered somewhat academic when Peter kills his suitor and decapitates him. As Blyth says, it’s all rather ‘problematic’.

But then the horror genre is always problematic – its nature is to undermine certainties, not reinforce them. The final ‘shocking’ freeze frame of a naked and blood-spattered Angela is an image of the transexual (albeit the unwilling transexual) as wholly demonic. Yet perhaps there’s also a sense of relief that Angela, after so much prevarication, has finally been able to reveal her true (albeit monstrous) identity and say ‘I am what I am’ and fuck you to the rest of the world – fuck you even to the film makers’ intentions and to the context in which the film was made. Perhaps I am being as contentious as Mr. Blyth, but it seems to me that writer-director Robert Hiltzik’s film is messy enough to embrace all kinds of meaning, including a perversely celebratory one. At any rate, I walked out of the BFI with a smile on my face.