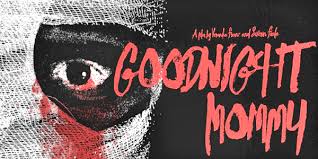 TV presenter Mommy (Suzanne Wuest) returns from plastic surgery with a bandaged face and a bad temper, so that her twin boys Elias and Lukas start to wonder if she’s really Mommy at all, the question mark over her identity deftly conveyed in a scene where she plays a game with the twins where the object is to guess the name affixed to the participants’ heads on a post-it note – Mommy is herself (‘Mama’), but she struggles to get it.

The family live in a remote house in the country, providing some nice views (Martin Gschlacht’s photography is excellent) along with the requisite sense of chilly isolation. Strangely, Mommy employs no nanny, or – as might have proved more useful in the event – bodyguard.

The English title, and the basic scenario, has echoes of Mommie Dearest, which might raise expectations along the lines of a camp domestic horror movie of the kind that would once have starred Joan Crawford. Veronika Franz and Severin Fiala’s film is a lot more solemn and slow-burning but it still has more than a trace of the deadpan camp that’s a trademark of director Ulrich Seidl, who produced this. It’s that understated humour that makes this ordeal bearable, and even in a perverse way enjoyable.

Initially the unease derives from the threat posed by this suspected impostor, and from the power any parent wields over her child; when the tables are turned and the kids tie Mommy up and torment her mercilessly as they try find out where their ‘real’ mother is hidden, the film, beneath its sheen of picturesque sang-froid, started to remind me of the old Pan Books of Horror from the 70’s, the ones that quoted the gory bits on their back covers (‘Her brain spattered on his shoes’). Which is no bad thing in this case.

Whether Goodnight Mommy has anything useful to say about Austria’s Nazi past, as it seems to imply, isn’t clear, but as a slice of Grand Guignol it’s rather successful – certainly the bloke behind me at the Curzon Soho was gibbering (annoyingly) in terror throughout. It works best if you guess early on what might or might not be intended as a twist. Throughout, Mommy studiedly ignores Lukas – ostensibly because he has transgressed in some way, but actually because he isn’t really there: he’s dead, and only exists in the imagination of his brother. This helps to explain Elias’ nastiness to his mother, which is grounded in an absolute refusal to accept that his brother is gone, a conviction his mother refuses to let him cling to.

At the end the family (minus the father, who is never seen) are ‘reunited’. Elias has rediscovered his ‘real’ mother by burning the disappointing impostor alive and settling for the one in his head. There’s a sense in which, in torturing and murdering his mother, he is only continuing the process begun by his mother’s plastic surgeon: butchering reality to create an ideal – an ideal which consequently lacks depth. Maybe the film does too, but somehow I didn’t really care, possibly because I too lack depth. Which is a useful insight, at any rate.