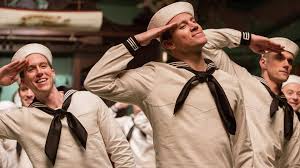 One of the funnier scenes in the Coen Brothers’ 50’s Hollywood-set latest has Ralph Fiennes as a fussy English director struggling to incorporate studio-imposed Western star Hobie Doyle (Alden Ehrenreich) into his drawing room comedy Merrily We Dance. Before his utter hopelessness with ‘sophisticated’ dialogue has made itself fully apparent, Fiennes suggests that he attempt ‘a mirthless chuckle’. It’s a phrase which seems to echo throughout a film that is not as much fun as its trailer suggests it will be.

I nearly wrote ‘not as much fun as it ought to be’, but only the Coens know how much fun this ‘ought’ to be.

The plot has Josh Brolin’s studio head Mannix trying to decide whether to give up his job for a cushy post at Lockheed, all the while dealing with a crisis precipitated by the kidnapping of big star Baird Whitlock (George Clooney) by a group of Communist writers. Neither of these seems quite enough to build a movie around – the Communist plot is frivolous stuff (Whitlock takes the abduction very much in his stride) and the question of whether a man will give up one well-paid job in favour of a better-paid one isn’t exactly edge-of-your-seat stuff.

In terms of ideas, however, there’s a lot going on. Mannix’s possible defection raises the question of whether movies have any intrinsic worth outside of merely financial considerations, while the Communists see them largely as products churned out by the system to keep the masses in thrall. These two strands are brought neatly – maybe too neatly – together in the main film-within-the-film, Hail Caesar!, a ‘worthy’ Biblical epic espousing Christian ideals which, come to think of it, bear a certain similarity to Communist ones.

Ultimately and unsurprisingly Mannix, who lives for his work, chooses to stay with the studio – he is practically the studio system personified – which may suggest that something other than money drives him. Love maybe? But that’s hard to find in this film, which often seems like a series of set pieces without sufficient emotional glue to hold them together. Very good set pieces though: Channing Tatum fronts a witty song-and-dance number in which sailors go from lamenting the fact that there will be ‘No Dames’ on their upcoming voyage to resolving, as they dance together, to make the best of things.

Authentic emotion only flowers, ironically enough, in two studio-arranged fake romances which unexpectedly turn real. Elsewhere, what you feel should be a romp comes across as a little mechanical, as if the machinations behind the movie magic are showing through. Which is the whole point, I suppose – at one point Frances McDormand’s editor is dragged by her scarf into a projector, causing Merrily We Dance to grind to a halt. The Coens don’t throw these things together, you know; it’s just that sometimes you wish they did.

Mind you, if this is a mirthless chuckle at the expense of the system that produced it, then by rights it shouldn’t be much fun – strictly speaking, it probably shouldn’t ‘work’ at all, because then it would just reinforce the system it’s criticising. High Rise works, or doesn’t, in a similar way – it critiques the system that produced it (capitalism) and doesn’t quite hang together, though unlike Hail Caesar!, it isn’t too neat – rather, it’s a bit of a mess. It also features scenes of men (Luke Evans and Tom Hiddleston) dancing together, maybe confirming that, at least in the era preceding the discovery of ‘the pink pound’, capitalism thrived on sublimated homo-eroticism. Or it could be a coincidence. Unlike in a Coen Brothers film, and for good or ill, there’s room for coincidence and accident in High Rise.

This retro-futurist nightmare, set in a 70’s London that never materialised outside of J G Ballard’s 1975 source novel, has architect Anthony Royal (Jeremy Irons) occupying the penthouse suite (including roof garden) of the luxury high rise block he has devised as both a home and a social experiment. Also, as a metaphor for society: the better off you are, the higher up you live.

Robert Laing (Tom Hiddleston) is a psychologist on one of the lower floors who is drawn into his neighbours’ intrigues, while remaining coolly aloof. As the infrastructure keeping these people fed and watered starts to fail, so society takes a turn for the primitive.

An Afghan hound drowns in the swimming pool, a man takes a dive from the 25th floor (after a certain amount of psychological nudging from Laing) and parties, indefinitely extended, spill over into the corridors and become raiding parties. The lower floors revolt against the people placed above them and before you know it there’s chaos. Which, as everyone knows, is hard to reconcile with a compelling narrative thrust (cf: David Cronenberg’s not dissimilar 1975 film Shivers).

Although Ben Wheatley’s film looks fantastic, beneath its coolly compelling sheen it feels like it’s struggling to navigate a way through the source material. When it works (a memorably cold-blooded sexual encounter between Laing and a neighbour, or the cameo from Bill Paterson as a solicitor distressed to find that Luke Evans has taken a shit in his attaché case) it feels accidental. Each scene is left to find its own tone, whether blackly comic or archly cerebral or horrific. Then again, this kind of disconnect goes with the territory I suppose.

Possibly the film misses being in a specific genre, whose constraints it could have deconstructed in a way that usefully mirrors the collapse of the society it depicts. And I know no-one asked me but if I’d made this film – and it’s a big if – I would probably have set it in the late 50’s or early 60’s, when social (and filmic) conventions were more fixed, and the overturning of them more dramatically interesting. It could have started out like an Edgar Wallace Mystery, with everybody in suits and enunciating perfectly in black and white, which would have made it all the more shocking when by the end they were roasting each other’s pets and wallowing in filth.

But as it stands it’s very much about the 70’s, like an apocalyptic take on the Winter of Discontent. It even ends with a cheeky quote from Mrs. Thatcher about the superiority of free-market capitalism to state capitalism. Another Thatcher quote – ‘There’s no such thing as society’ – would have served even better, not just as an account of the way things fall apart inside the building, but as an explanation for the fact that nobody outside it seems to give a shit.

This is not a problem in the film, which manages to make of its tower block a self-contained world, though Amy Jump’s script still feels the need to have a solitary panda car turn up with Neil Maskell in it. Though normally to be found on the top floor, architect Royal just happens to be around to open the door and assure him that everything is under control officer – it’s a joke I think, though not the kind you laugh at. There are quite a few of those here.

Wheatley has yet to make a film that isn’t flawed in some way but there’s probably enough here to justify repeat visits in which you may well scavenge from the rubble a gleaming shard that you didn’t notice first time around. Tom Hiddleston makes a fine Ballardian hero, the easy charm masking the sociopath within, and his bits of voiceover narration – from the novel (I think) and thus referring to himself in the third person – work very nicely. I wasn’t entirely sure about the slow-burn Portishead cover of Abba’s SOS but the appearance of DAF’s Co Co Pino was a pleasant surprise.

High Rise is a thing of fragments then, though in spite of that lack of cohesion so symptomatic of the modern world I am here to report that five minutes after leaving the Curzon Soho I passed Reece Shearsmith, who plays one of Laing’s neighbours, in the street. For a moment, still in thrall to the film, I wanted to hail him, as though recognising one of my own neighbours.

But of course I didn’t. And if he had been one of my neighbours, I’d still have ignored him. That’s what it’s come to.