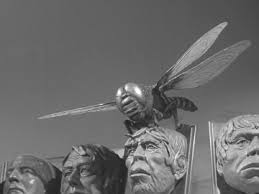 This begins with college professor Donald Blake (Arthur Franz) completing his collection of busts depicting the various stages of human evolution with one of ‘Modern Woman’, taken from his  fiancée‘s face. Subsequently, as if this is the peak of evolution and there’s nowhere else left to go, he reverts to a Neanderthal state and goes on the rampage.

This is not a deliberate policy, as is so often the case with scientists in films like this, it’s a total accident caused by close proximity to a coelacanth lately brought in from Madagascar (where the living fossils come from) by the Dean of the college to create a splash and encourage investment.

It creates more than just a splash though, causing a German Shepherd to grow (bigger) fangs and a dragonfly to expand to the size of an albatross. It turns out that evolution, although a very lengthy and complex process taking place over centuries, can be undone in a matter of seconds after contact with a living (though in this case actually dead) fossil that has been exposed to gamma rays. You can hardly blame Blake for not realising this sooner.

Although our scientist is not mad or evil the film retains that scepticism about science so characteristic of the monster movie. There’s a good scene where the hero’s rather smugly-delivered speech explaining how he came to the conclusion that a ‘subhuman’ must be on the loose, falters when his logic leads him to the comically awkward realisation that the subhuman must in fact be himself. So much for progress.

Although it must be said that the film’s main claim to be ‘anti-rationalist’ lies in its being a load of old nonsense. Still, under the direction of Jack Arnold it’s a very beguiling load of old nonsense, shot with all the fluid elegance of a comedy of manners.

Arnold was responsible for classic early 50’s monster movies like Tarantula! and Creature From The Black Lagoon – here is where the fag end of that trend meets the burgeoning teen horror movie (I Was A Teenage Frankenstein/Werewolf etc.) In a sense this fails on both counts in that the rubber-faced monster, which is mostly kept in the shadows until the end, is not hugely impressive and there aren’t many teens on view (those that we do see – notably Troy Donahue – seem to be eminently sensible).

But it gets right to the point of both movie trends by undermining science and, therefore, adult authority. All of which comes together splendidly in a scene where Blake reverts to his primitive self after that ultimate aid to rational thought, the scientist’s pipe, becomes contaminated by the coelacanth’s drippings.