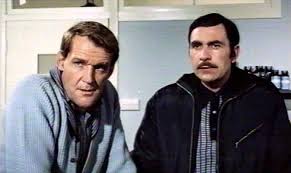 I seem to remember this showing late at night on ITV back in the 70’s, but I never bothered to stay up watching it, and quite rightly as I was surely too young to appreciate how bad it is. Now it’s showing on a Saturday morning on Movies4men, at a time when, back in the day, I would probably have been watching The Banana Splits. Which was probably more disturbing.

In Gerry Levy’s film the disappearance of various parachutists in mid-descent causes consternation in military and government circles, inducing General George Sanders to call in Patrick Allen’s Bob Megan, a freelance womanizer whose presentation as a sort of bargain-basement James Bond is suggested by the fact that his sidekick Jim is played by Sean Connery’s lesser-spotted brother Neil.

In fact Megan largely comes across as a boorish sexual predator. ‘Brains and beauty!’, he crows upon spotting white-coated scientist Julie (Hilary Dwyer) peering into a microscope. That she doesn’t return the compliment is unsurprising, given that Megan’s head looks like a rock formation, and seems just as dense. Certainly he seems to be, ahem, feeling his way in this case – even before he knows that aliens are involved he has slept with one, a mysterious woman called Lorna (Lorna Wilde) who hangs out on the beach at night.

He first suspects that something otherworldly is going on when one of the parachutists is recovered and proves to be radioactive, though it takes forever for anybody to notice the radioactivity and even when they do nobody seems particularly concerned. No doubt they were made of stronger stuff in those days – after all, they managed without political correctness. (Allan Cuthbertson’s philandering government minister, working his way through a series of secretaries, offers further evidence of this). Later, Lorna’s dropped scarf is discovered to be radioactive too, and you can almost hear the gears grinding in Megan’s brain as certain ideas come together.

Indeed the parachutists are, it turns out, being kidnapped and held in storage by Lorna and a fellow alien (who is disguising himself as Julie’s boss, Dr. Matthews) prior to being transported to their dying planet, Migon, in order to help repopulate it. Migon is a combination of the hero’s surname and the name of the production company that made this film, Tigon. I really want to think that this suggests a hidden significance, not just an almost heroic lack of inspiration on the part of the script (by Mike St. Clair), but I can’t quite manage it.

Finally Megan and Julie are trapped in a basement by the aliens, while the professor gives them, and the audience, the lowdown on their planet’s plight, and the measures they have taken to remedy it. When Megan asks why they didn’t just ask for help from Earth the alien explains that they did try ‘but we couldn’t penetrate your scepticism.’ Luckily Megan has penetrated Lorna’s scepticism to such a degree that she rebels, and allows Megan and Julie to escape and the kidnapped parachutists to be revived and returned home.

The film ends with Megan and Lorna parting like lovers – which of course they have been – and Megan promising to come over to Migon sometime to help sort things out. Yeah right, we’ve heard that one before…. although possibly Megan is seeing Migon as a new field ripe for ploughing once he’s got bored with Julie, which probably won’t take long.

Oddly, the fact that Lorna has killed Megan’s sidekick Jim is elided, in what seems like a tacit acknowledgment of Neil Connery’s comparative insignificance in the grand scheme of things. They didn’t even bother to steal his body.