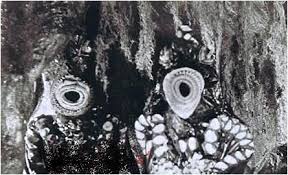 Into my life comes a dumpbin full of DVD’s at £3.00 each, temporarily arresting my progress through Fopp. Movie Legends. They don’t look promising. Murky covers and nothing on the back but a plot summary (that does however, in the case of Attack, include the ending). No 8k restoration, no ‘making of’ featurette, no interview with surviving cast and crew members if any. Not even a trailer.

Nevertheless, £3.00. And Attack of the Giant Leeches, which is the most alluring title on display, is a film I am aware of, but have never seen, and although there simply isn’t time for me to watch all the films I want to, something about this one nags at me. It’s as if The Attack Of The Giant Leeches was a historical event, and not knowing about it will severely impact on my understanding of the world I live in.

Well not so much in the way of an explanation. When the heroine asks her doctor father how such creatures could have come to exist the best he can offer is: ‘The proximity of Cape Canaverel might have something to do with it’. Had the budget run to it the locals might have descended upon Cape Canaverel with flaming torches and pitchforks but needless to say the budget does not run to it. It barely runs to acting.

Ken Clark plays square-jawed game warden hero Steve (maybe that square jaw is what inhibits his ability to deliver a line with any conviction), who initially objects to a suggestion that dynamite be used to destroy the creatures because this will also decimate the local wildlife. However, when his father-in-law the doctor goes ahead and does it anyway, he only glares at him – and then later presides over a second (arguably successful) attempt. Indeed, this time he depresses the plunger with his own hands. So much for the ecosystem.

The only really lively characters come in at the start of the film, which introduces a sordid love triangle between overweight bar owner Dave, his young floozy wife Liz, and Cal, one of the bar’s patrons. Their noir-ish situation suggests a vision of human relations as essentially parasitic, with each participant only interested in what they can take from the other, be it sex or security. Are we the real giant leeches? the film might be asking. Only to answer ‘no’, as the actual leeches capture Liz and Cal. Meanwhile Dave, guilt-stricken at having forced the pair into the swamp at gunpoint, hangs himself in jail.

Although in fact Bernard L. Kowalski’s film never offers anything as definite as a ‘no’. It’s too apathetic, as though something of the moribund atmosphere of the swamp has seeped into it and its characters. Even the shapeless quality of the ‘leeches’ partakes of this; and look at how easily Steve gives up on his ecological principles. The doctor claims at the end that there will be ‘tests’ to determine the nature of the leeches, but I’m not convinced – they’ll probably just forget all about it, until it happens again.

THE END comes up over a shot of the swamp waters and as some weird scientific noise overwhelms the soundtrack you feel that it could just as well be the beginning as the end. Keep watching the swamps. Or don’t bother.