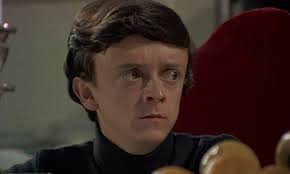 In the prologue to this plot-free Italian zombie opus, also known as The Nights of Terror, a professor raises the dead from an Etruscan tomb just in time for the arrival of a group of privileged merry-makers down for a weekend at the adjoining country house.

With one exception the visitors are a bland bunch of couples – the real characters in this film are the zombies, even if the distinction between them lies only in their make-up jobs. The make-up is varied and expressive, even if the only movement on these faces comes from strategically-placed worms and maggots. But any of these zombies could have made the cover of the Pan Book of Horror Stories back in the 1970’s. Director Andrea Bianchi lingers lovingly over them as they make their leisurely way through the Italian countryside while the living couples – as seems to be de rigeur on arrival at an Italian country house – have sex.

Arguably there is more sensuality in the depiction of a corpse inching its way out of the earth than is shown in a nearby coupling. But that might just be me. In any case the living characters are an uninspiring bunch who are only there to bear witness to the make-up and smash a few undead skulls in before fulfilling their ultimate destiny as food. The one exception is Michael, the son of the older couple here, who resembles a dwarf pretending to be a young boy – possibly because that’s exactly what he is, the actor playing him (Pietro Barzocchini, or ‘Peter Bark’ in the Anglicized credits) being 25 at the time.

As if that wasn’t disconcerting enough, there’s Michael’s voyeurism to consider (early on, he’s seen lurking in the corridor outside bedrooms where couples are having sex) not to mention his eccentric mode of dress and hairstyle, his nervousness and morbidity (‘Mother, this old cloth smells of death!’) and his sexual attraction to his mother Evelyn (Mariangela Giordano). Initially repelled by his advances, Evelyn, overjoyed by her son’s return from the grave towards the end, belatedly encourages him to suckle at her breast – at which point he gives a startling new twist to the term ‘breastfeeding’. It’s a moment so very outrageous that it seems more than just a novel bit of gore – it might even be the whole point of the film. Assuming that it has one of course.

Mikel Coven in the 88 Films DVD extras posits, a little embarrassedly, the notion that the dead here represent the proletariat avenging themselves on a decadent middle class. I’ll buy it – they know how to operate a circular saw, after all. But it’s what Michael represents that interests me more – and he’s such an eccentric figure that he must surely represent something. Perhaps he’s meant to be our audience identification figure – which is to say that this is how Bianchi sees the horror audience: a bunch of voyeuristic misfits, cowardly and sadistic; craving security, yet perversely compelled to, as it were, bite the hand that feeds them. (Mr. Bianchi, I put my hand up – I just wish I had Michael’s hair.)

This might explain Bianchi’s approach to the material, feasting on images of oozing pus and maggots and gore but generally eschewing the connective tissue of story and emotional involvement – he’s giving the audience ‘what they want’ but more importantly what they deserve. The film is a florid gesture of contempt for its audience. You can’t help but lap it up.