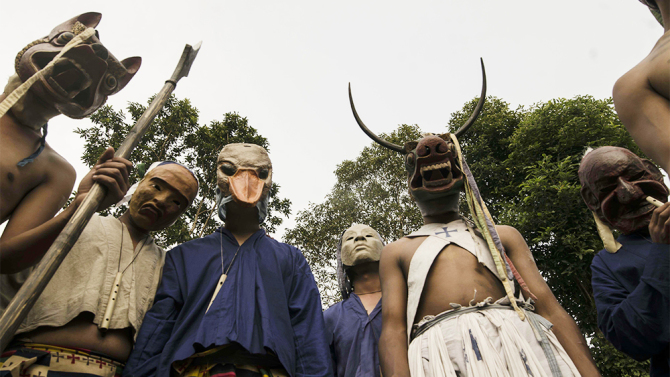 EYES OF MY MOTHER

This curious little black-and-white number, from America, has received some acclaim but to these eyes was not quite curious enough. It’s the story of Francisca, who at the start of the film is a young girl leading an idyllic existence in a remote farmhouse with her parents. We begin with a scene in which Mum entertains and educates her by vivisecting a cow’s eyeball, but such precious mother-daughter moments come to a viciously abrupt end soon afterwards thanks to a visit from a door-to-door psychopath, who kills Mum.

This leaves poor Francisca alone with Dad, an uncommunicative lump who spends most of his free time watching Westerns on TV and sleeping with her (in at least one sense). Well, she’s not quite alone with him – there’s also her ‘only friend in the world’, this being her mother’s killer, who Dad is still keeping chained up in the barn, eyeless and voiceless but still just about alive.

When Dad dies loneliness forces her to turn to this pathetic creature for comfort – needless to say, it doesn’t work out, and she has to head out into world to seek companionship. Which doesn’t work out either.

The director Nicolas Pesce talked in NFT3 about how aware he was of the need to keep the material ‘grounded’ but I’m not sure that he managed this. Why does the outside world never really figure here except at moments crucial to the plot, like when Francisca suddenly decides to wander down to the local roadhouse and pick up, without apparent difficulty, a woman?

And if it isn’t quite realistic, neither does it achieve the kind of oneiric atmosphere that would create a little world of its own.

There’s a moment when one of Francisca’s blinded victims escapes from the barn and the camera lingers on the victim’s strange, halting movements, creating a genuinely weird scene like something out of a lost Japanese horror film from the 1960’s. But for the most part I found it all a bit too clean and matter-of-fact.

Presumably this matter-of-fact approach is part of what is meant to keep the film ‘grounded’ – it’s embodied in the pragmatism of the main character, who knows how to get what she wants, and isn’t squeamish about clearing up afterwards or using up the leftovers. But it’s too straightforward – its vision should be fundamentally skewed. Strange as it might be to say it, this just isn’t weird enough.

Francisca is given a Portuguese background just to make her a bit more peculiar, but for authentic strangeness you have to go to Portugal itself, from where Joào Pedro Rodrigues’ film hails. An attractive young birdwatcher (Paul Hamy) gets lost in the wilds after his canoe capsizes. Luckily a couple of women, Chinese Christians on a pilgrimage, happen to find him; less luckily for him, they decide to string him up with a view to castrating him later.

At this point the film has already abandoned realism and begun its journey into the territory of myth, successfully negotiating that transition from the everyday into the extraordinary which I found to be lacking in Eyes Of My Mother. And so our hero escapes from his bonds and and finds himself on a pilgrimage of his own during which he is menaced by yahoos in bizarre costumes and meets, fucks and kills Jesus – not that Jesus, this is Jesus the mute goat-herder, although, yes probably he’s the ‘real’ Jesus as well, even if he has got an identical twin brother (who later kills the ornithologist in revenge for his brother’s death.)

But wait, he isn’t dead, he turns into St. Anthony of Padua (or Lisbon, if you prefer), played by the, it has to be said less attractive, director. The goddess Diana also appears, bare-breasted on horseback, to shoot the ornithologist with a hunting rifle. If this doesn’t feature in John Waters’ top ten this year, I thought to myself, then I’m the Great God Pan.

It didn’t, but maybe he hadn’t seen it.

HEMA HEMA: SING ME A SONG WHILE I WAIT

Waters’ number one film was Krisha, which I failed to see at the 2015 London Film Festival. It got a ‘limited release’ over here in December 2016, but, rave reviews notwithstanding, a ‘limited release’ turned out to be one showing on a Wednesday night in Barnet. Even for art, even for Waters, I wasn’t prepared to go that far.

It’s about a (fictional) festival in a remote location where everybody sheds their identity, even their gender, upon entering, and dons masks so that they may revel in freedom from society’s restrictions.

Initially this is intriguing. It’s beautifully shot, and the masks are certainly striking. But while the concept may work on a symbolic level, on a practical one it doesn’t have legs. The masks are too cumbersome to work as anything but a symbol of freedom, and they don’t really conceal anyone’s gender. Had this stayed on the metaphysical and spiritual level, like The Ornithologist, it might have worked but that dimension is soon closed down, leaving us with a relatively straightforward, and slightly disappointing, tale of rape, murder and possible redemption.

A shame, as I wouldn’t want to discourage Bhutan (or director Khyentse Norbu) from making films. But I am overlooking my own insignificance. They managed to get Tony Leung to be in this. The producer (Shashi Kapoor) said they contacted a lot of people, even Dolly Parton. I don’t know if her participation would have improved my viewing experience, but I doubt that they would have been able to conceal her gender with a mask.