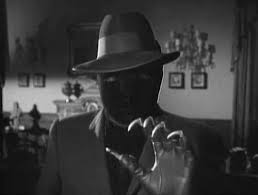 This comes from a cheap and pretty random box set of ‘horror’ DVD’s I got as a Secret Santa present – thanks, Lorraine! – so there’s no frills here, no trailer or ‘Making Of’: they barely manage to give you the film itself. Which is bad anyway, so creaky you can hardly hear the dialogue. Not that you’d want to.

In this adaptation of an old hit play by Mary Roberts Rhinehart and Avery Hopwood in the Cat And The Canary mould Agnes Moorehead plays crime novelist Cornelia Van Gorder, who presides over a household menaced by ‘The Bat’, a maniac in a balaclava and steel-clawed leather gloves – all the better to rip your throat out. He even keeps a few real bats on hand for added dramatic effect.

The Bat might be the best thing in this, freed as he is from having to participate in the clunky dialogue and thus able to exult in his own physicality. It is the rest of the cast who seem like phantoms, especially in this poor transfer, where their features tend to dissolve into white blurs – they seem as flimsy as characters in a bad novel, like the one Van Gorder is in the process of writing about the very events that are taking place around her.

In contrast, the Bat does have a kind of presence, though he seems somewhat overdressed in his suit, even taking the trouble to top off the balaclava with a hat, to faintly comic effect. And since his main objective in this is to find a cache of money secreted somewhere about the house – not to frighten or kill people, though he does both – you have to wonder if these are really the right clothes. Surely those steel-clawed gloves can’t be very practical if you’re just trying to chisel a hole in a wall.

The tendency of the plot is to encourage us to believe that the Bat is Doctor Wells (Vincent Price), since we’ve already seen him shoot someone dead in the first reel and since, well, he’s Vincent Price (though at this stage he was not quite the horror icon he would became in the Roger Corman years). But that would be too obvious, as would Warner (John Sutton) the English butler with the shady past, so to absolutely nobody’s surprise except the characters’ the Bat turns out to be the investigating policeman Lt. Andy Anderson (Gavin Gordon), who has, it’s fair to say, been pretty cranky throughout.

You do wonder why he bothered to dress up as The Bat – wouldn’t his other costume, that of policeman, have enabled him to search the house more effectively, and alone too, as he could have had the place evacuated? But maybe this film is an illustration of Sartre’s concept of bad faith: when in the guise of a policeman, he can only act like a policeman; murkier impulses demand a more outré outfit.

At the end, once it’s all resolved, Van Gorder, in the midst of dictating the end of her novel, turns to the camera and declares: ‘No matter how clever you are, you can’t hide murder’. Up until now, Crane Wilbur’s direction has not shown much awareness of the camera except as a largely static recorder of events, so this comes as a bit of a shock – lying there in my pyjamas (it was Saturday morning) I felt not only that the film had turned to notice me, but also that I might very well be concealing a murder I’d forgotten about, somewhere in my bedclothes.

But in fact this is the moment where the film suffers its own existential crisis, the moment where it realises that it is not, after all, a play, as Wilbur’s leaden direction has tended to suggest – or a book for that matter. It is exactly as if Moorehead has only just noticed the camera and it’s potential for showing things. Now she is trying to project the film’s collective guilt at its failure to realise that potential onto me.

Well tough shit Moorehead. You’re a good actress but not that good. This sudden spasm of self-awareness comes far too late in the day to rescue The Bat from never having really lived, except maybe in the form of The Bat himself who – being personified by his own notional nemesis the policeman – rather cancels himself out anyway.