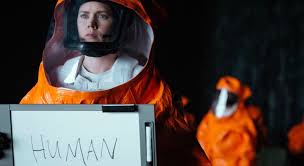 Denis Villeneuve’s Arrival brings to our attention something about contact with alien life forms that to my knowledge hasn’t been thoroughly explored up until now – how boring it might be.

That’s not to say that the film itself is boring – although it does hover on the verge of it at times – rather, that linguistics professor Amy Adams’ attempt to decode the aliens’ language, and thus effect some kind of communication with them, is plausibly laborious. Things get so draggy for everyone that at one point some of the soldiers in the army camp Adams is residing in stage an insurrection, as though just to liven things up a bit. It doesn’t work.

The aliens have landed in twelve locations across the world (including, we are informed, Devon) – or not quite landed, since the smooth grey obelisks they travel in hover just above the ground. Villeneuve creates an atmosphere of unease in these early scenes as effectively as he did in Enemy, the only other Villeneuve film I’ve seen, but he comes close to overdoing it as we approach our first glimpse of the aliens. I started to fear that their appearance might elicit what the Prince Charles ad about unacceptable behaviour in the auditorium calls ‘inappropriate cackling’.

I needn’t have worried. The aliens – blind spidery squid – are acceptably eerie, and not without dignity. In many ways, Arrival gets it right. It has got a lot of praise for being a bit more intelligent than standard Hollywood ‘sci-fi’, and it is. But a little knowledge can be a dangerous thing.

I mean I’ve read a lot of critics talking about how fascinated they were by the details of linguistic analysis herein, but all I saw was Amy Adams walking around in front of the aliens carrying a sheet of card with the word ‘human’ written on it. I seemed to miss the moment where they ‘broke the code’ of the alien language – as far as I could tell they were in the dark one moment and understood the basics in the next.

Instead, all I got were distractions, like the ‘kangaroo’ anecdote. Asked by Colonel Forrest Whittaker for something he can use to fob off the top brass, who are getting antsy over how long all this is taking, Adams offers him the apocryphal story of how the kangaroo was misnamed (an Aborigine, asked what that funny-looking animal was called, replied, in their own tongue, ‘What did you say?’ and this was taken to be the name.)

This is meant to demonstrate the earth-shaking importance of Adams’ work, yet it is very hard to imagine Whittaker actually telling this story to board of senior military officials, and even harder to imagine them being impressed. Has a kangaroo being called a kangaroo really been such a blight on civilized society? On the contrary, the Skippy theme tune, to take just one example, might not have worked out so well had it been otherwise.*

In contrast, at the end the film chucked a massive steel girder at me, hitting me in the head – the ‘mind-blowing’ revelation that the alien language, once understood, enables one to perceive time in a non-linear fashion. This allows Adams to save the world (which has been brought close to meltdown by the arrival of the aliens) by the simple act of ‘remembering’ a future occasion in which the president of China explained to her how she saved the world.

Whoa there Villeneuve! I need to get my head round this. Is it clever? Or is it cheating? It’s like something out of (the new) Doctor Who. Not that I dislike (the new) Doctor Who, but its whimsical approach to the genre is at odds with the prevailing tone here.

But there’s more. At the beginning of the film and throughout its length we have been shown what we have been led to assume are flashbacks to Adams’ past, wherein she had a daughter who died of an illness in her teens. Now we understand that what we have actually been seeing is her future – Jeremy Renner, the scientist she has only just met, will be the child’s father, but will leave her when she decides to have the kid knowing that she will die young.

So yes it’s complicated, and raises too many questions too late in the day. Enemy ended with a mind-fuck too, but at least there was no logic to that, which is how a mind-fuck should be.

Adams is excellent and on an emotional level, this works pretty well as the story of a woman coming to terms with a repressed trauma – the twist being that the trauma is from the future rather than the past. The aliens work as mysterious emanations from her unconscious mind offering ambiguous clues to the events she has ‘forgotten’ – as aliens they left me wondering why they were being so mysterious, especially when they can see the future and could presumably have brushed up on their human languages before making the trip.

Oh well maybe it doesn’t work like that. I must admit to not having read Ted Chiang’s short story on which Arrival is based but I have toyed with the book in Waterstone’s. On the back cover it talked about Chiang ‘deftly blending human emotion and scientific rationalism’. This, despite its undeniable strengths, is not such a deft blend. As one woman’s emotional journey it’s fine, but did they have to bring the rest of the world into it?

Although I was curious as to how it all went down in Devon.

*I can think of an example from science fiction that would have made Adams’ point far better: Damon Knight’s 1950 story To Serve Man (also a Twilight Zone episode) wherein a book of that name is found to be in the possession of visiting aliens. It is assumed to be a manual about how best to help humanity, but it is in fact (SPOILER ALERT) a cookbook.