A Cure For Wellness 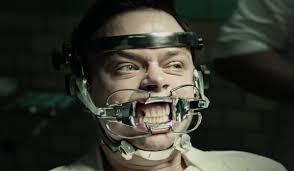 A slice of Hollywood Eurogothic from Gore Pirates of the Caribbean Verbinski, this begins quite promisingly in a vein of deadpan camp – a mode which serves it well enough until it goes (almost literally) down the toilet.

Lockhart (Dane DeHaan), a young, reptilian Wall Street banker, is sent by his even more lizard-like colleagues to visit a mysterious clinic in Switzerland and persuade a client to come back to New York to seal the deal on some important merger. You can imagine a feelgood movie with the same plot: the ruthless banker (dismissing his Dad, who jumped off a bridge when he was a small boy, as ‘weak’) comes to understand in the idyllic surroundings of the clinic that there is more to life than the pursuit of money, and leaves a better man.

One of the positive things you can say about ACFW is that it is not that film. The best advice one could give visitors to this spa is ‘Don’t drink the water’ but too late, Lockhart does so and one car accident later he’s a patient. Signifiers of unease include the (impressive) architecture, a phantom stag wandering through a sauna, loose teeth, and a surfeit of eels – not that anybody ever uses the word ‘eel’ as far as I noticed, Lockhart just calls them ‘things’.

Unfortunately this falls short of hallucinatory strangeness as it increasingly comes to an awkward accommodation with Gothic cliché. ‘I have seen this before’, says the head of the clinic, Doctor Volmer (Jason Isaacs), as Lockhart, forced into a corner, protests that he ISN’T mad while looking and sounding exactly like a madman; by this stage, I was sympathizing with the evil doctor’s cynicism.

The plot never quite comes into focus but is something to do with Volmer draining bodily fluids (and money) from his rich clientele (including Celia Imrie), and thus preserving the lives of himself and his fey daughter Hannah (Mia Goth) across the centuries.

The awkwardness of the film’s approach is perhaps best illustrated by a scene in which Volmer, preparing to rape his daughter, sticks his finger in her vagina and then sniffs it. It’s a scene you somehow don’t expect in a film that’s being advertised on the sides of buses, but it is followed by the hoariest of horror film cliches as Volmer rips his own face off to reveal the horrible mess beneath, as in, to take just one example, House Of Wax (1953).

And maybe if Vincent Price, the star of that film, had been available he might have made this work. Certainly, I felt that I would have enjoyed this more if Isaacs had looked like he was enjoying himself more, instead of just battling to keep a straight face.

At the end Lockhart is strapped into a sort of iron lung and has his stomach pumped full of eels, which makes a new man of him, perhaps literally. As he rides off on a bicycle with Hannah, away from the board of his firm (who have improbably all turned up in a big black car to investigate his activities) he is grinning like a maniac. But I no longer cared.

Still I suppose it’s quite interesting to consider this in the light of that old narrative of a ‘healthy’ democratic New World confronting a corrupt feudal Europe (cf: Henry James, or Douglas Sirk’s 1957 film Interlude). Of course, nowadays everybody’s sick.

Verbinski has his champions, and it may well be that more is going on here than is immediately apparent to me. Celia Imrie’s invalid obsesses over puzzles, which may suggest that there is something to be worked out here, starting with the title, which might be a nod to The Road To Wellville (T. C. Boyle’s novel – and Alan Parker’s film – about American healthy-living obsessive Dr. John Harvey Kellogg), and also (or so it pleases me to think) Hieronymous Bosch’s painting The Cure Of Folly, which depicts a man having a ‘stone’ cut out of his head by a quack doctor. The irony being that the cure for folly is itself mad.

But all I’m left with is that word ‘folly’. This is Verbinski’s folly. In time, tourists may flock to it, and marvel. For me, 146 minutes of staring at it was more than a little wearisome.