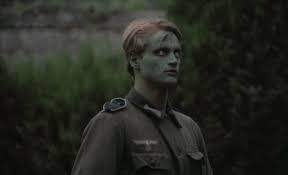 It was last November that I went to the Cine Lumiere to catch up with the latest offering from Bruno Dumont, showing at the French Film Festival, and it has taken me up until now to process it.

In fact that’s a lie – I still haven’t processed it. In Slack Bay Dumont is continuing in the vein of his previous TV mini-series, P’tit Quinquin, in that this too is a comedy, but radically departing from it in that it isn’t very funny. But that’s fair enough from a director who likes to test us. When, ten minutes into this showing (which was ten minutes late starting) the fire alarm went off and we were all sent down dark labyrinthine corridors, out into the cold night, I did wonder if this was all part of the experience, somehow dictated by Dumont.

It might even have been his hand on the switch. I certainly wouldn’t put it past him.

Set in the early part of the 20th century Slack Bay has a bourgeois family – contorted into strange postures and behaviours by their distance from authentic experience (maybe) and by a history of inbreeding (definitely) – staying in a mansion by the beach, where the disappearance of tourists is being investigated by two Laurel and Hardy-like policemen.

The bourgeosie include Juliette Binoche and Fabrice Luchini, which is perfectly in keeping with Dumont’s expressed distaste for the slick tricks of professional actors, as there is nothing remotely naturalistic about these performances – Binoche lets it all hang out, going wildly over-the-top while Luchini clenches himself into a barely-human caricature of bourgeois ineffectuality.

The latter’s observations on the beauty of an embarrassed-looking son-of-the-soil (or sea) might suggest that Dumont is parodying his own aesthetic, or his audience’s expectations, but if this is self-parody at least it isn’t lazy self-parody. On the contrary, it is pursued with admirable determination.

Our two over-determinedly comedic policeman seem almost set up to invite comparisons with P’tit Quinquin‘s Van Der Weyden and Carpentier and to come out of it badly. Meanwhile we are also party to the activities of a family of mussel-pickers, one of whom, Ma Loute, falls for one of the bourgeois kids, in an echo of the central relationship between P’tit Quinquin‘s boy hero and his great love, Eve.

Here, however, things are complicated, not only by a lack of clarity as to the bourgeois loved one’s gender, but also by the fact that the mussel-pickers are cannibals, which explains those mysterious disappearances, but doesn’t bode well when it comes to meeting the parents. Eventually people start levitating. None of this is exactly funny, but Dumont may just have taken comedy beyond that, into new and faintly creepy territory.

‘Was that a typical French film?’, asked the woman next to me of her companion, when it was over (the companion laughed – harder than she had at the film, I think). I wanted to ask a similar question at the end of Zombie Lake but I was watching it at home on DVD, and there was nobody to ask.

Well I think I’m glad that this was the first. Zombie Lake was due to be yet another addition to the teeming oeuvre of Spanish director Jess Franco, except he couldn’t direct it for some reason and French exploitation director Jean Rollin took over. The main difference between Franco and Rollin is perhaps that Rollin’s films (which tend to feature young female vampires in various states of undress) show signs of consciously striving for art, whereas Franco’s films, if they ever achieve it, seem to do so by accident.

Perhaps this is unfair. However, it isn’t really an issue here. Zombie Lake, here reissued on Screenbound’s new Black House label and given a wonderful transfer which makes me feel like smearing filth on my glasses just to restore some sort of balance to the universe, rather bypasses art.

You might call it bottom-of-the-barrel genre scrapings. At the same time, as it veers maniacally from sauciness to awkward menace to hilarity to bizarre sentimentality (and the soundtrack echoes these abrupt switches in tone) it is, in a sense, anything but generic.

Nazi zombies lurk in a French lake, picking off the attractive young women for whom this lake seems to hold a particular appeal. The locals do not seem too concerned. ‘In the morning if she isn’t back I’ll see the mayor’, says one, on being told that a woman hasn’t returned from her nude swim. ‘If she doesn’t turn up tomorrow I’ll call the police’, says the mayor (Howard Vernon) the next day.

On being presented with a corpse with its throat torn out, the mayor says they’ll send it for an autopsy to determine if ‘anything is wrong’. Only when the zombies overreach themselves and take down an entire female basketball team (well, all but one of them) are the villagers galvanised into action, though perhaps this is only because the survivor has run topless into the pub, screaming her tits off.

This is enough to get Vernon on the phone to the police, but his insistence that the murders have been caused by ‘ghosts’ gets a sceptical reception and only two investigators, Spitz and Morane (one of whom is played by Rollin) are dispatched to the village to make inquiries. They prove even more incompetent than Slack Bay‘s Machin and Malfoy and are soon dispatched again, this time for good, by the zombies.

These scenes certainly prove the point that the best way to get laughs is not to strive too hard for them, if at all. And yet we could see this general slowness to react to events not as dramatic ineptitude but rather as a way of dramatising a community’s unwillingness to confront events from its recent past (this is set in the 1950’s, apparently). Eventually, you see, the mayor is reluctantly persuaded to unburden himself to a (young, female, attractive) journalist and tells her the story of how the villagers killed the Nazis and chucked their bodies in the lake, though not before one of them fathered a child with a (willing) village girl.

It is tempting to wonder, as the events the mayor describes unfold across the screen, whether his narration to the journalist lingers on the sex scene between the Nazi and the village girl quite as much as the images do (‘..and then he licked her right nipple as she moaned in ecstasy…’) but that is by the by.

The long and short of it is that the villagers, finally roused to action, drag out the artillery, only to find that bullets have no effect on the zombies (well why would they?) but that napalm (well, why wouldn’t it?) does.

But the old flamethrower the villagers bring out of retirement provides a bittersweet victory since it incinerates the one ‘good’ Nazi along with the rest of them. The good Nazi is of course the one who got the village girl (now dead) pregnant, and who has been conscientious enough to visit his daughter, in tender scenes which lend the film an incongruous fairytale air. I mean it isn’t quite Spirit Of The Beehive but there is something oddly moving about the scene where the girl feeds blood to her dad (whose green make-up suggests not so much decay as a facial treatment) as though taming a wild creature.

‘I won’t forget you’, she vows at the end, and you wouldn’t would you – forget your green-faced Nazi zombie father who came back from the dead to visit you? It’s just the kind of thing that sticks in a child’s mind.

But along with its psychological acuity, this final flourish also recalls the reluctance to remember that characterised the film’s early scenes – it is as if that has been overcome now: a wound has been healed.

Although it must be said that there is an element of history repeating itself as farce. Aside from Franco veteran Vernon, whose performance stands out here like the Gothic edifice his character occupies, the acting is very bad. The zombies, given their military background, seem surprisingly uncoordinated, and the war scenes are extraordinarily inept.

Then again it’s worth remembering that Bruno Dumont has been criticised for his inability to stage both war (Flanders) and police investigations (L’Humanité) competently – it didn’t stop him winning the Palme D’Or. Too late for Rollin, but it’s interesting to compare the two auteurs, both presiding over their particular obsessions in their particular corners of France (Slack Bay, Zombie Lake). Only when Dumont finally makes his own Nazi zombie film – once he gets that musical about Joan of Arc out of the way – will we be able to make a clear judgement.

PS: Perhaps I should point out that I was watching the French version with English subtitles, and not the version dubbed into English (both are available on the DVD). Generally dubbing tends to increase the hilarity level in a film of this kind; in this case the subtitled version was quite hilarious enough. I am, however, prepared to believe that the dubbed version is even more amusing – I imagine, rightly or wrongly, a version of Allo Allo made for, and by, psychotics.