White Devils: Get Out, The Transfiguration and Whity (1971) 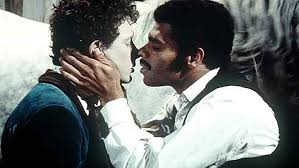 In Get Out a black American guy Chris (Daniel Kaluuya) goes with his white girlfriend Rose (Allison Williams) to visit her (rich) family, only to find them a little overbearing in their acceptance of him. Sure, they’re liberal, but as he wearily agrees with the father’s enthusiasm for Obama’s presidency, or backs away from the MMA-fan brother’s possibly-homoerotic interest in his ‘beast’-like physique, our hero is soon forced to conclude that oppression can take different forms. Meanwhile, his approaches to the black servants are met with a vaguely hostile and weirdly stilted response.

Things get stranger after Rose’s psychotherapist mother (Catherine Keener) hypnotizes him: what begins then is a loss of identity that becomes the film’s theme, and gives a jolt of freshness to what turns out to be a hoary old mad scientist scenario. The rich white folks, it seems, are abandoning their worn-out malfunctioning bodies to occupy fresh black ones. Why black? Because it is ‘in fashion’. In other words, the threat here derives not from traditional racist oppression but from a liberal ‘sympathy’ that masks an insidious desire to possess. It also suggests the ways in which the dominant culture infiltrates your mind – get out as in get out of my head.

There are problems. If as many black bodies as the film suggests have been hijacked in this way, you can’t help but wonder where they all are – I mean, they should at least have had some positive social effect in terms of visibility by now, shouldn’t they? And it seems a little incredible that the grandparents would choose to live out their unnaturally extended lives as servants in their own mansion. Liberal guilt? Well maybe, but it’s all a bit glib.

The scenes with Chris’s friend Rod (LilRel Howery) are so different in tone from the rest of the film that they resemble what used to be called comic relief. Their conversations also make manifest the notion that there is a ‘true’ black identity that the hero can sink back into when the white folks reveal their monstrousness, which is possibly a bit too cosy for a horror film.

Mostly however, the balance between horror and humour is well-judged, and the film manages to create the kind of unease that actively demands some kind of relief – even turning the sound of a teaspoon scraping against a cup into a resonant symbol of terror. The moment where Keener orders her hypnotic subject to ‘sink into the floor’ is one of the best shock transitions from the merely sinister into the actively scary that I can remember seeing in a horror film.

If Get Out is a horror film. Its satirical elements perhaps put it into another category, a bit closer to The Stepford Wives maybe, though it also reminded me of You’re Next. The Transfiguration generally avoids the generic too, despite the appearance of Larry Fessenden, a director who has died in many a horror film (including You’re Next), so many that he might be trying to establish some kind of record. Here he barely shows his face before expiring, though he is instantly recognisable. Troma head honcho Lloyd Kaufman is in it too, though I didn’t notice until the end credits rolled.

The Transfiguration is about Milo (Eric Ruffin), a young black kid who thinks he’s a vampire. He isn’t, of course – although he does kills people and drink their blood, so you could be forgiven for getting the wrong end of the stick (or stake). This film is not so obviously about black identity but is more interesting than Get Out when seen in those terms.

In I Am Not Your Negro, the recent – excellent – doc about James Baldwin, we are acquainted with Baldwin’s view that, in demonizing black people – and thus exiling a part of their own humanity as though it were diseased – white Americans become ‘monstrous’. You can see all that going on in Get Out and you can see it here too.

Is Milo’s self-identification as a vampire a response to being demonized? Maybe, but on a more practical level it allows him to remain sanguine about whatever life throws at him, from the deaths of his parents (‘It is what it is’) to the abuse he gets from the local hoodlums who call him a freak. After all, he isn’t really part of their world at all.

But his chosen destiny does complicate his relation to whiteness. As a notional vampire, obsessed with films like Let The Right One In and Near Dark, he must necessarily find (as James Baldwin did growing up in the 30’s and 40’s) that his heroes are largely white – very white. More than that, they are white people as monsters. Yet Milo’s victims are also white – suggesting that he is both identifying with his oppressors and simultaneously taking revenge on them (possibly, the film suggests, for his mother’s suicide).

Milo’s immediate oppressors are black however, white people being the exception rather than the rule where he lives, a fact which only renders them all the more insidious and ghostly, as if they really were supernatural figures secretly holding all the power.

Then Sophie arrives. A self-harming teen who moves into his apartment building, she is white, and attractive to him, which makes her troubling. He can’t bring himself to have her for a mere snack and anything longer-lasting is off the menu as long as he clings to his vampire persona, which to his mind is not a romantic one. He is no Twilight fan (she is.)

Fatally conflicted, he is left with no option but to walk out into the sunlight, or – more realistically – into the path of a drive-by shooting which he has to some degree engineered. Ruffin’s low-key turn is good enough that I really wanted him to return from the dead for a sequel, but that would have been to betray director Michael O’Shea’s bleak, understated aesthetic, not to mention Milo’s own insistence on ‘realism’ in the films he loves.

It’s tempting here to talk about Moonlight or The Fits, two more recent films with black protagonists explicitly struggling with their identity, but there’s barely a white face in them and it’s white monsters I feel more qualified to deal with so I’m tempted to leave America (and yet remain in it) for Whity, which showed recently as part of the BFI’s Fassbinder season.

Whity does actually feature a woman in blackface make-up but then it was the 70’s and it’s only one of a number of outrages perpetrated by Fassbinder in this Gothicized German-language Western. Here a white bourgeois family (their whiteness also intensified to the point of ghoulishness by thick make-up) are held together by the usual kinds of things that hold bourgeois families together: fear, sexualized power games, money, and the expectation of further money to come.

Their mixed-race servant Whity (Günther Kaufmann) is happy to play the role of whipping boy (literally) in this household, where they certainly regard him as less than human. Naturally this doesn’t stop them wanting to have sex with him or trying to persuade him to kill their spouses/siblings. He has other options available however, notably a relationship with barroom chanteuse Hanna Schygulla, whose songs sound like bad Eurovision entries and who keeps trying to persuade Whity to leave town with her.

The family includes the retarded Davy, who spends most of his time licking the set, and Ulli Lommel’s Frank, who at one point tries to seduce Whity wearing a basque (oddly prefiguring another Frank – The Rocky Horror Picture Show‘s Frank N Furter). This character is the subject of perhaps the film’s most hilarious line, when his father (Ron Randell) yells, towards the end, ‘Frank ist krank!’

Not that this is Lust In The Dust exactly, but laughter is not necessarily an inappropriate reaction. In Fassbinder’s hands, Western cliches look distinctly different. Take that familiar moment where the hero walks into the bar, the music and the talking stops, and everyone turns to look at him. Here this is less an intensification of the drama than a point where the drama is suspended and the spell is broken – an existential crisis forcing everyone to reconfigure their selves.

For the most part, however, the spell holds remarkably well, the whole thing always poised to collapse into farce yet never quite doing so, maintained by Fassbinder’s extraordinary ability to fuse the theatrical with the cinematic. The hypnotic quality of the film is analogous to the way we are held in thrall by society, possibly in spite of our best instincts. If the appeal of the Western is about revelling in freedom from the rules of civilization, Whity suggests that freedom is hard to come by. Even when Whity shows his commitment to questioning prevailing social structures by killing the family and running off with Hanna, it only ends with them dying in the desert.

Although when you look at the prospects for mixed-race relationships displayed in Get Out and The Transfiguration, you might consider that a comparatively happy ending.