Barbican Nights – Into the Woods Part One 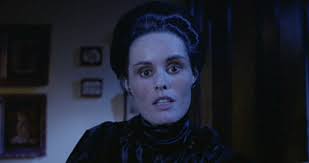 In an unusual attempt at consistency I thought I’d review this folk horror season curated by Cigarette Burns (Josh Saco), consisting of four films showing at the Barbican during May, the first being:

Only I didn’t go to that one. I remember seeing it on TV in the 80’s and finding its blend of art and genre to be a bit awkward. But I was younger then, I probably got it wrong. Maybe it was awkward in a good way, that I wasn’t sophisticated enough to appreciate. Still I just couldn’t find it in me to sit through it again. I’m not made of money.

This showing began with Josh anxiously debating with himself – in front of everyone and out loud – whether to show a digital or a (apparently not very pristine) 16mm version of the film. Eventually he asked for a show of hands. (Then he asked for another show of hands because he didn’t count them first time around.) It was like Brexit all over again except that on this occasion a wave of unthinking nostalgia did not carry the day and leave us all with an inferior product – digital won.

The unshown 16mm print was a TV one in a smaller ratio, but apparently this film acquired what reputation it has through late-night TV showings in America. In fact this reminded me of a made-for-TV horror movie in some ways. Though they have the reputation of being bland, American TV movies were often surprisingly bonkers, as a recent lecture I attended on the subject at the Horse Hospital made clear*. A typical plot – as I recall – would have a group of blind men who have survived a plane crash (caused by demons) having to scale a mountain to get back to civilization, all the while fending off sexual assaults by rabid skunks. But no swearing or gore.

This isn’t especially violent or gruesome either and you almost wouldn’t know that it’s about an ‘angelic’ choirgirl’s sexual awakening at the hands of lesbian vampire Lemora (Lesley Gilb, riveting in the part which, if this really were a TV movie, would have been taken by Karen Black). Angelic she may be but even at the start of the film Lila Lee (Cheryl Smith) is becoming uncomfortably aware of the admiring glances of local men – the vicar included – and is further compromised by the knowledge that her absconded father is a notorious gangster.

When she goes off alone to search for him and hopefully bring him to God she finds her unease about the world being more than borne out by the grotesque landscape full of beast-men and vampires – seemingly at war with one another – that apparently lies just beyond the town where she lives.

Her dad is staying at Lemora’s place, recovering from an illness – or at any rate he was until he jumped out of the window. This is not a hopeful sign in terms of his recovery – rather, it seems that he has turned into one of the beast-men. Lila is left with Lemora and the strange pale children she looks after, but just what is that red drink they are passing round in seeming parody of communion?

Though increasingly unnerved by her hostess’ attentions she eventually has to choose between her and her hairy monster of a father, and opts to stick with Lemora and vampirism. She is last seen baring her fangs as she sets about making the vicar’s secret dreams come true, if not in quite the way he imagined.

Something like that anyway. It’s quite possible that, having succumbed to Gilb’s hypnotic glare myself, I hallucinated some of it. In spite of its occasional clunkiness Richard Blackburn’s visually-striking film does sustain the persuasive air of an unfolding dream – if David Lynch turned out to have based his entire career on it I wouldn’t be at all surprised. It is sometimes compared to the equally dreamlike 1970 Czech film Valerie And Her Week of Wonders, but whereas that was an arthouse classic this is deeply mired in schlock. But an element of schlock never seems out of place in a story of adolescence – American adolescence in particular.

*Given by Amanda Reyes, editor of Are You In The House Alone? A TV Movie Compendium. The Horse Hospital is not a horse hospital – or not anymore. It’s a three-tiered arts venue in Bloomsbury. When I first went there I worried that I’d get lost and have to ask someone where the Horse Hospital was, as if I had a sick nag in tow. But it’s quite easy to find.

They make you wait to go in though, which does seem like cruel and unusual punishment, forcing you to queue for something so niche. But what would culture mean if they didn’t make you suffer for it?