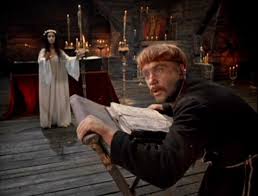 This, Josh Saco explains, is a ‘lost’ film, and just because it is here tonight screening in front of us that doesn’t mean it has been found again. I mean, who are we to ‘find’ it? Even the director, Avery Crounse, was happy to let it go and move on, apparently.

Some other people who might also have ‘found’ it at some stage are the makers of recent film The Witch. There is a resemblance. This too is a story of some early American settlers, thrown out of one community and attempting to set up another, who are menaced by dark forces from the woods.

At any rate, they make an interesting comparison. There is none of The Witch‘s ambiguity about supernatural events in Eyes Of Fire. Instead we are treated to exploding bad guys, a demonic Native American child, and a very corporeal devil witch who traps her victims in trees. And this is no bad thing, especially if you didn’t like The Witch very much.

It seems to me that the naïve approach suits the material far better than the more ‘sophisticated’ stance of the later film – these people believed demons and witches were real, so why shouldn’t they be presented as such? If you don’t like it you can always ascribe the whole thing to mass hallucination. And the effects, when they aren’t a bit quaint (which is fine), are often rather well done, notably the faces in the bark of the trees and the devil witch emerging from and sinking into the forest floor.

Whereas The Witch saddled its cast with overly ‘authentic’ dialogue, the script here manages a better compromise between historical accuracy and naturalism. It’s the ability to deliver the lines that is sometimes lacking. Still if some of these performances (and accents) miss a certain finesse, it’s OK. This is not a film that’s overly interested in deep insight or social critique – they didn’t have time for all that in those days: they were too busy surviving, and becoming hysterical.

Really they are like children afraid of the dark and clinging to Daddy, an idea borne out, in the simplest fashion, in the plot. Our young narrator, Fanny (Sally Klein), is missing her father, Mum having abandoned him for the community’s disastrous leader – a weak, misguided priest (Dennis Lipscomb). When Dad (Guy Boyd) returns, his traditional masculine know-how doesn’t manage to save the day exactly, but it proves welcome. He’s called Marion, but then so was John Wayne (though this Marion is willing to give Native Americans the time of day). And if he doesn’t manage to survive, he helps to ensure that his kids do.

Perhaps I’m overly willing to excuse the awkwardness of many scenes because the film is something of a relic itself, from the 80’s. On the other hand this story of a lost and ignorant people desperate for a leader may in its very lack of sophistication be ahead of its time. Perhaps it’s fair to say that we are never out of the woods.

Nikolai Gogol’s short story Viy was also the basis for Mario Bava’s 1963 classic Black Sunday. The main difference between that and this Russian film from directors Konstantin Ershov and Georgiy Kropachyov is that Bava largely ignored the source material whereas this follows it almost slavishly. In terms of delivering a traditional horror movie, it has to be said that Bava had the right idea. Still, Viy is not to be written off lightly.

Tonight it comes with a preface from Professor Faith Wignall, who gives us some interesting background on the folklore that Gogol was working with – telling us, for example, that he made a lot of it up. Our hero Khoma (Leonid Kuravlyov) is a student at a seminary who, like all his fellow students, prefers drinking and debauchery to studying (Professor Wignall did not say how her experience of students compares). Spending the night in a farmhouse he is approached by an old woman who appears to want to seduce him, but in fact climbs on his back and rides him through the night sky, since she is a witch.

Ride over, the humiliated Khoma beats the crone, who then turns into an attractive young woman in what seems like a reversal of what should be the normal process, if there is such a thing as normal in these cases (Professor Wignall said, if I remember rightly, that Gogol’s attitude to women was ‘strange’). Subsequently he is called back to pray over her body for three nights while she comes back to life and makes increasingly elaborate attempts to penetrate his protective chalk circle.

Initially she merely walks around him feeling out invisible walls like a mime, before bashing her floating coffin against the barrier. On the third night the film erupts in a riot of imaginatively designed goblins, vampires and gnomes, chief among which is Viy himself, one of the stranger monsters of filmland – a creature with eyelids so droopy they have to be lifted up by someone nearby so that he can fix his deadly gaze upon the hero. This onslaught finally succeeds in overcoming the poor student’s defences, though at the end we find his two friends, back at the seminary, debating whether in fact he died and whether his experiences were really all that terrifying. ‘I’ve seen worse in my cups’ one concludes drily.

There are films which are driven by narrative and films which meander. This sits uncomfortably between the two – it follows Gogol’s story closely but Gogol’s story, though entertaining enough on the page, has no real urgency to it. Unable to meander on its own terms and unable to work up much narrative drive, this proves to be somewhat plodding, and tonally peculiar in its mix of low humour and supernatural dread. Nevertheless it is still an intriguing and well-shot curiosity which manages some impressive visual flourishes, and I was glad to be given the chance to see it at the cinema.

Folk horror seems to be on the upswing since it was first invented as a genre what seems like a couple of years ago. In the age of Brexit and Trump it can, surely, only grow in popularity as whole populations turn away from global considerations to focus on their own internal peculiarities. Perhaps the monsters we have encountered in the US and Russia will re-emerge, or new creatures will take shape.

As for the UK (as it is still currently known)… the next time I was in Screen 3 at the Barbican it was to see Edith Walks, Andrew Kötting’s experimental odyssey depicting a walk undertaken by him, poet/author/psychogeographer Iain Sinclair and singer/performance artist Claudia Barton (dressed as Edith Swan-Neck, King Harold’s wife) plus three others, from Waltham Abbey – where some part or parts of Harold may be buried – to St Leonard’s-on-Sea, where some other bits of him might or might not be buried.

The idea is to piece him back together on some level, though this attempt to establish a unity is presented in a fragmented way, in which the poetic and the banal are jumbled together. Barton sings in the Greenwich foot tunnel, or caresses a monument to Harold while the camera cranes overhead, turning the image upside down.

Meanwhile, the walkers consult OS maps and are questioned by the police (though it all seems quite friendly).

Meanwhile schoolchildren, filmed in the 1960’s, re-enact the Battle of Hastings.

A lot of it works. The music’s haunting – Jem Finer is largely responsible – and even the sound of the train of Edith’s dress dragging along the ground has an obscure resonance. What does it all amount to though? I don’t know. I don’t know if I even begin to understand it, or if there is nothing to understand. On the soundtrack we hear someone referring to a man who ‘doesn’t know if he is dreaming, or making it up’, which seems to me to apply very nicely to the whole nebulous concept of psychogeography.

Kötting’s experiment has not succeeded in creating any monsters however. And yet… the film was preceded by Forgotten The Queen, an animation by Kötting’s daughter Eden, also about Edith Swan-Neck. This dense, quivering assemblage of children’s art wittily evokes the one place the audience is most likely to have encountered Edith – the classroom. And there’s enough life in these demonic doodles to convince me that a grotesquerie or two might well emerge from them to join us in our brave new world. Is this a good thing or a bad thing? Well let’s just say it’s experimental.