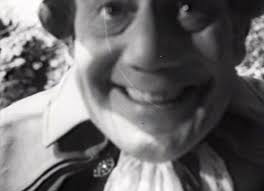 Crimes At The Dark House (1940) is nominally a version of Wilkie Collins’ novel The Woman In White in which Tod Slaughter is Sir Percival Glyde – or rather he isn’t, he’s an impostor first seen hammering a tent peg into the real Sir Percival’s left ear. Which is to say that, although The Woman In White is known as a mystery novel there is, from the very beginning, no mystery here. Presumably the thinking was that there was simply no point in pretending that Tod Slaughter might be anything other than the villain.

It’s a sound strategy, as anyone familiar with Slaughter’s work will agree. Born Norman Carter Slaughter in 1885, he was generally found playing a villainous stock character who might best be described as (and often actually is) The Wicked Squire in Victorian crime melodramas, first onstage and later onscreen. The films he made sometimes (notably in 1939’s The Face at The Window) approach horror in their intensity, but the intensity is wholly Slaughter’s.

Slaughter’s approach to these parts is not to resist the theatricality which renders many of his films stilted and unengaging to modern viewers, but rather to invest his one-dimensional villains with as much energy as possible. He cackles with demonic glee, creeps about with his cloak pulled up over his face, and if he doesn’t actively twirl his moustache in Crimes (well it isn’t that kind of moustache) then he does obsessively smooth it.

In Crimes, perhaps the biggest crime is that perpetrated upon Collins’ novel, which has been effectively hijacked to become a vehicle for Slaughter. But he gets away with it because his enthusiasm is so infectious. Turning up in the guise of Sir Percival at his family pile, he wastes no time in promoting (if that’s the word) a comely parlourmaid to chambermaid ostensibly so that she can bring hot water to his bedroom, though her pregnancy shortly afterwards suggests that her duties may have proved more involved. And no sooner is she pregnant than she is dead, after unwisely keeping an appointment with Slaughter in the old boathouse, thinking that they are going to elope.

Fat chance of that, she is only to be ‘a bride of Death’ as he gloats, quoting himself in Maria Marten; or The Murder In The Red Barn (1935). Touches like this turn the film into a sort of postmodern black comedy in which the audience is expected to relish Slaughter’s villainy as much as he does. This one goes so far as to allow the heroine Laura Fairlie (Sylvie Marriott) and Slaughter to marry, and the wedding night scene makes it clear that there is something worse than being bumped off by Slaughter – awaiting his husbandly attentions, Laura, cowering beneath the sheets, shows more anguish than any of his murder victims do.

Naturally we don’t see the consummation, only his hand on the banister as he creeps up the stairs towards her. It’s the English way – sex and horror are best left to the imagination. Though here, where the two are conjoined, the imagination balks at the task. Slaughter is a physically imposing man, and not in an aesthetically-pleasing way. Though yes, it does depend on your aesthetics.

But it is here that we find the key to Slaughter’s effectiveness – intimacy. Slaughter’s evil is penetrating. It is no accident that Sweeney Todd was his most famous role – he makes the most of the hidden terrors of the barber’s chair, that place where one is forced into physical intimacy with a stranger.

‘That’s what I like to see’, he says to a co-conspirator in 1946’s Curse Of The Wraydons. ‘A strong man frightened.’ Slaughter’s ferocity gives you a sense of him feasting vampirically on his colleague’s sensations – and the fact that Slaughter’s co-actor in this scene is irredeemably wooden gives this an added irony, and even a certain poignancy.

‘I’ll screw your blasted necks, with pleasure’, he tells a couple of henchmen in the same film, flexing his fingers suggestively – there’s more than a hint of polymorphous-perverse sexual pleasure in his rampant enjoyment of his own monstrosity, and even a bland line like ‘I’ll deal with you presently’, delivered near the end to the trussed-up heroine, is given all kinds of awful implications by his emphasis on that word ‘deal’.

Even in a film like It’s Never Too Late To Mend (1937) where Slaughter doesn’t kill or have sex with anybody this ghastly over-familiarity still asserts itself. Slaughter is Squire Meadows, a Justice of the Peace visiting a local prison, but whereas the other two JP’s in attendance are profoundly bored by the whole ritual, he shows an unnerving enthusiasm for the role, even though he doesn’t personally administer the prisoners’ punishments, only oversees – and suggests – them. ‘I regard them all as my children’, he says. ‘My naughty children’. The familial scene this evokes is not to be dwelt upon for any length of time.

But one of the conventions of these stories is of course that Slaughter never wins. Here he ends up a prisoner suffering the very torments he once happily saw meted out to others. Yet if he doesn’t win, the Devil does, in a twisted way (and Slaughter is always playing Old Nick deep down). The film – so the opening titles piously inform us – is based on Charles Reade’s play, credited as being an influence on Victorian prison reform. And yet the satisfaction of this ending is wholly dependent on the prison remaining unreformed.

Slaughter’s performances have a way of undermining the sentimental aspects of his surroundings. At the end of INTLTM the heroine narrowly escapes marriage to him, and at the last moment weds the hero instead. At which point Slaughter, before being dragged away, indulges in a final mad flourish, telling her that the wedding bells we hear in the distance are saying: ‘He’ll break your heart! He’ll break your heart!’

We have no earthly reason to think that the hero would do any such thing, yet on the other hand he’s rather a bland stock figure and we don’t really have much compelling evidence to the contrary either. This leaves Slaughter’s prediction, or curse – which is far from stock – ringing in our ears, louder than the bells.

If INTLTM is reasonably entertaining, Curse Of The Wraydons, made towards the end of Slaughter’s film career, is rather a chore. Whenever Slaughter isn’t onscreen you long to jump onto the set and chivvy the scene along – and the fact that this, like most of his films, does little to hide its stage origins, actually makes this seem possible. Of course it isn’t, worse luck, but Curse is set in Essex, which at least lends the stilted performances the added interest of foreshadowing TOWIE – Slaughter even visits a beauty salon in one scene, to buy ‘Peruvian pomade’.

For a dull film, there is a lot of going on here: a duel, a Napoleonic spy ring, and numerous throttlings at the hands of Slaughter. But it’s only Slaughter, dealing death, who brings it to life. In one scene he stands over that ‘strong man frightened’ from the earlier scene, asking him questions about the hero’s uncle, a mad inventor – questions to which he knows the answers already, since he is himself that long-lost uncle, Philip Wraydon. There is really no point to the scene, except as a dramatic device for keeping the audience informed, yet Slaughter’s intensity suggests a sadistic pleasure in forcing his fellow actor into a recital that exposes his inadequacies. It is as though he has taken over the production by force and is bending it to his own sadistic ends.

Slaughter’s performances are the kind often described as ‘barnstorming’ – no surprise, then, that they tend to break the fourth wall, along with all the others. This is certainly apparent in Crimes At The Dark House, which doesn’t pretend to be about very much except Tod Slaughter (indeed, we never find out the character’s real name) and consequently lets him run riot, free to chew up the cast along with the scenery.

The irony being that his surroundings are more substantial than usual. The film, apparently directed, like INTLTM by David MacDonald (though George King is credited) moves at a brisk pace and has some decent performances, notably from Hay Petrie in fine comic-sinister form as Doctor Cosco, accommodating Slaughter’s wife in his lunatic asylum. She isn’t really mad, of course – even if insanity might have been a legitimate response to her wedding night – it’s all part of Slaughter’s evil plot to get his hands on her money. Slaughter substitutes her with his own deranged daughter (the Woman in White herself) and arranges her death so that he can claim his wife’s inheritance.

Of course the plot fails and Slaughter, after hanging Doctor Cosco from a bell rope, ends up burned alive while trying to destroy the parish records that incriminate him. ‘I don’t want to die!’, he bellows, but you do get the feeling that, on this occasion at least, he had a good innings. The last shot is of his hand on the floor, clenching into a fist, as if even death can’t relax him.

Yet, however much he enjoys himself, he’s still a tragic figure underneath it all. As the most evil person in any given room, there’s an essential loneliness about him, and the liveliness of his performances, compared with his often inert surroundings, only exacerbates this impression. Hence, perhaps, that hunger for intimacy that only ever emerges in crude sexual advances, insinuation, and strangulation.

It is Curse of the Wraydons, whatever its shortcomings, that gives him his most appropriate death – crushed inside his own invention, a pit where the walls come together to squash anyone unfortunate enough to be inside it. It’s the loneliest imaginable demise (all the more so for taking place offscreen) – yet also, in a peculiar way, a very intimate one. As with the obsessive smoothing of that moustache in Crimes, the only intimacy Slaughter’s characters can ever achieve is with themselves.

This death also provides us with a neat summing up of his career, only backwards. Essentially, he was managing to squeeze full-blooded performances out of one-dimensional characters – this reverses the process, collapsing him back into the one-dimensional. We are left to imagine all the blood.