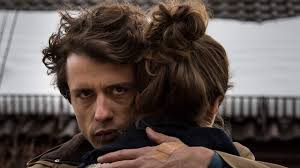 As regular readers would know (if they existed), Frightfest usually marks the one time in the calendar year where I don’t go to the cinema alone: Dave comes along. Or at least he does for part of the time before he has to duck out due to work commitments or (as two years ago) a bad eye.

Well his bad eye came back. I won’t go into grisly details but suffice it to say that this year I went alone. As though to comment upon this a Frightfest theme developed around doubles and imaginary companions – I’m not kidding, it was spooky.

The Glass Coffin began it, and Simon Rumley’s Fashionista continued it. In all fairness twinned identities are a relatively minor aspect of this film, but they are there. Amanda Fuller is April, who runs a vintage clothing shop in Austin Texas with partner Eric (Ethan Embrey). When he cheats on her she finds herself falling into a relationship with a rich and reptilian young man called Randall (Eric Balfour), who induces her to lose the vintage rags, and offers her money towards a whole new classy wardrobe.

Initially insulted, she soon becomes addicted to the lifestyle Randall introduces her to, possibly because of the absence of any emotional commitment, but his enthusiasm for increasingly violent sex games with strangers eventually sends her fleeing back to Eric and vintage clothing. Her mistake is to take with her a bundle of Randall’s cash, a decision which has nasty consequences – for Eric in particular.

Even if it hadn’t been dedicated to Nicolas Roeg, his influence on Rumley’s film would have been apparent from the shifts forward and back in time, as future events cast their shadows before them (and also from Amanda Fuller’s distinct resemblance to Theresa Russell). But whereas Roeg’s narrative disruptions are more cerebral in their impact, the strength of Rumley’s film is emotional. Fuller’s performance is memorably raw and Rumley’s direction, though certainly stylish, stays true to that – there’s a notable scene where April has a meltdown in a high end clothes shop, stripping naked and collapsing in a sobbing heap on the floor while the assistants pretend not to notice.

Rumley maintains a disquieting atmosphere throughout, though you couldn’t really call this a horror film. I had to leave before the Q&A, which I hate to do because it always seems so rude (especially when you pass the director on the – narrow – stairs as you flee) but I left thinking how remiss it is of me that I haven’t seen any of Rumley’s other films.

We’re all familiar with the motif of the Imaginary Friend, the hero’s apparently solid companion who turns out to be a mirage. Brad Pitt in Fight Club is an obvious example; James Cosmo in Cristian Solimeno’s 2011 film The Glass Man a less obvious one. Freddy/Eddy reverses this trend – here the imaginary friend turns out (SPOILER ALERT) to be real.

That may be as original as this gets, but no matter – there’s still fun to be had in Tini Tilmann’s film, notably in Felix Schfer’s well-judged performances as neurotic Freddy and his suave, psychotic other half. His life in turmoil when he is accused of beating up his estranged wife, Freddy is not entirely surprised to find his imaginary childhood friend Eddy (all grown up now) returning to offer him support – Eddy was always the more capable one.

Then he discovers that his childhood friend may not have been imaginary after all. Apparently he really had a twin, and maybe he still does: and not just any old twin, but an evil one, who is not so supportive after all – indeed, his attempts to ruin Freddy’s life even encompass the seduction of his girlfriend’s 14 year old daughter. Of course evil twins are stock figures, and we might regret the abandonment of any kind of ambiguity, but this is pacy and well put together, a bit like a superior Scandi-noir that happens to be set in wintry Bavaria rather than Scandinavia (the scenery is marvellous, the overall look a bit drab).

Schfer is on hand to provide a live vocalization of Freddy’s last (post-credits) line, which is simply ‘Nooooooooooo!’ He gets it wrong, merely howling: ‘Ohhhhhhhhh!’, but we forgive him. He’s quite funny for a German, as he himself says.

From an imaginary friend who turns out to be real, we move on to an imaginary friend who becomes real. The pretty-boy-geek hero of Royce Gorsuch’s film, Mason (Chris Mason) is intent on solving all the world’s problems by hacking into the human mind and deleting the bad parts. His main ally in this project – his internet following aside – is the voice in his head, who eventually materializes as Phin (Scott Mechlowitz) a less pretty (but more amusing) young man who stumbles out of his bathroom one day.

Phin is, the director maintains, Mason’s id, and becomes one of the most benign materializations of that Freudian entity in cinema history – on attaining full status as an independent being, all he really wants to do is take drugs, fuck prostitutes, and lie around all day. But Mason and Phin’s combative, funny, relationship is at the heart of the film and makes it tick – you can imagine them as the protagonists of a TV series.

After managing to isolate the very spark of life (a glowing orb floating above his head) Mason is in a position to reprogram the human brain but is talked out of his crazy scheme by a woman called Sawyer (Spencer Locke) who seems destined to be his girlfriend – there is, however, a villain (Farhan Tarir) with no such compunctions, who is anxious to use the digital map of Mason’s brain to – mwah hah hah! – destroy the world.

Gorsuch namechecks Primer as an influence, but for all its many images of the human brain this is not at all cerebral, and possibly a bit too comic book for its own good. Nevertheless it has a slippery sense of reality that somewhat recalls Videodrome and a certain boyish enthusiasm. And I had real trouble understanding Primer.

Still, boyish is right – if you think Mason’s apparent girlfriend is too idealised to be real that’s because she isn’t: popping like a soap bubble at the end she proves, as Gorsuch explains afterwards, to be merely a manifestation of his superego. Of course the same can be said of many film heroines.

In this Mexican film from directors Carlos Alagara and Alejandro Martinez-Beltran (otherwise known as The Visualists) a remotely situated female psychoanalyst (Olga Segura) has a troubled young woman, Veronica (Arcelia Ramirez) to stay.

Initially uncommunicative (beyond loud orgasmic shrieks in the night) she eventually reveals a history of abuse, but then the seeming disappearance of Veronica’s previous analyst starts to ring alarm bells and when Veronica visits her in bed one night, it leaves our analyst thinking that it, all things considered, it might be more professional to terminate the relationship. But this relationship is not easily terminated.

It would not be too surprising to discover that the psychoanalyst has imagined her patient, but in fact (SPOILER ALERT) it’s the other way around: the patient has created the psychoanalyst in the image of her own abusive mother. Still, same difference really: the two protagonists are a single split subject, attempting to resolve the trauma that caused the split in the first place, and seemingly doomed to repeat it. Even a well-worn image like the severed telephone cable acquires a certain resonance in this situation.

And if we persist in viewing the women as two separate people, maybe that means we are crazy: but at least, in this well-crafted film we are in the hands of professionals.

Dave wasn’t so sure.