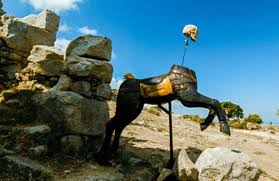 Violence. It can leave a nasty taste in the mouth, and perhaps it ought to. Brawl In Cell Block 99 certainly left a nasty taste in my mouth, but I’m almost convinced that this was intentional.

Not intentional as regards just my mouth of course. Mouths in general.

The film begins with our hero Bradley getting sacked from his job at a garage and immediately afterwards discovering that his wife (Jennifer Carpenter) has been having an affair – that he expresses his feelings about all this by taking his wife’s car apart rather than her tells us at least two things: firstly, that he’s basically a good guy and, secondly, that he is seriously disturbed. If there is a contradiction here, the film proceeds as though it were entirely unaware of it. Which is its strength. I have to say that when I read the film’s running time after seeing it (132 minutes) I was astounded – it only felt like 90 at most.

Bradley turns to drug-dealing to make ends meet and save his marriage, a tactic which actually appears to be working, at least until some Mexicans he is forced to work with prove just as unreliable as he knew they would be and he winds up in jail. This is only the beginning of his troubles, as his pregnant wife is then kidnapped by Udo Kier (in the pay of the Mexicans) and in order to free her (and save his unborn child from a fate worse than death) he has to promise to kill another convict.

The twist is that the convict is in a high security prison, so that Bradley must reinvent himself as a danger to society in order to get transferred there. Being a straightforward kind of guy, he finds that the best way to do this is to break other people’s bones, and his character arc continues in this vein.

Vaughan plays a likeable kind of guy, and his dialogue as provided by Zahler has a pleasing wit, so we can take this film entirely at face value as an unreconstructed and mindless thriller in which foreigners are unapologetically depicted as evil and women (there is only one) are analogous to possessions. On this level, it’s a direct appeal to Donald Trump’s fanbase. Bradley’s home proudly displays the American flag and the only gesture towards characterisation that the Mexicans receive (beyond slyness and incompetence) is that one of them has a comically deep voice. In my memory they are actually wearing sombreros.

But irony is like nuclear weapons – it can’t be uninvented. There are knowing elements, and the presence of art/horror veteran Udo Kier is surely one. Another is his companion (Tobee Paik), a Korean abortionist so skilled that he can mutilate a foetus in the womb without causing it to be aborted. Denied the opportunity to put his skills into action, he murmurs: ‘Disappointing…’ It may well be his only line, but it gets a laugh, cocking a little snook at the audience’s appetite for violence.

The plot too, is a knowing take on all those action movies where an essentially peaceable guy is compelled by circumstances into creating justified havoc. Except here the violence is genuinely nasty, pushing the boundaries just enough that we are made to wonder if our hero is only impersonating a psychotic monster, or if there need not after all be any distinction between the noble patriot and the madman.

Zahler conspicuously denies us any comforts – if we were expecting Don Johnson’s sadistic prison warder to work up some grudging respect for Bradley, we are disappointed. At the end, he just shoots him in the face, but by then Bradley has done too much in the way of abusing other people’s bodies to ever return to civilization, and he knows it. The last shot is of his features crumbling under the force of the bullet – suggesting, maybe, that the mask and the face have become indistinguishable.

Bradley is told to follow the arrows on the floor on entering prison – coincidentally, this is also how one discovers the cinema in the Rich Mix, an arts venue not far from Liverpool Street station. All the brutality herein was up on the screen however, in the new film from Belgian directing duo Hélène Cattet and Bruno Forzani.

Their first two films, 2009’s Amer and 2013’s The Strange Colour Of Your Body’s Tears are meditations on the giallo, pushing that genre’s insistence on style over substance into abstract realms. The first achieves a feverish slow-burn intensity, the second is a bit over-thought. I thought.

LTCT is as close as Cattet and Forzani have come to a straightforward thriller. It’s even based on a book – even if it is one I’ve never read, by two people I’ve never heard of. So there is a plot, although it is often very hard to tell.

Criminals fresh from an armed robbery hole up in a dilapidated mountaintop property in the countryside, somewhere near the Mediterranean. Here Luce (Elina Löwensohn), locally regarded as crazy, daydreams about the heady days of her youth when she used to allow herself to be strapped to a cross and covered in gold paint in order to realise her artistic vision. Unless it was the artistic vision of the writer Bernier (Marc Berbe) whose muse (and lover?) she was. He has since moved on, though not literally, as he is staying in the same place, and soon to be joined by his young wife and son.

Nothing is terribly clear (except the crystal-sharp images courtesy of Manu Dacosse) but it probably doesn’t matter very much anyway because after the criminal gang fall out over the gold they’ve stolen, nearly everybody gets killed.

The first thing to say about this is that it doesn’t really work as a thriller. It’s hard to work out what’s going on and even harder to care – it might help to have read the book first but you would have to get it translated from the French first.

Does this really matter? My cousin-in-law Stuart, who is watching this one with me, says it does, because ‘images can only take you so far’. But I’m not so sure: the images here are pretty astonishing, and have taken me a little further (and we shouldn’t forget the score, borrowed from many other movies, but with a definite life of its own).

As with this duo’s first two films, the emphasis is firmly on the surface detail: colours, textures. Everything that can be fetishized is fetishized to the last drop and sex and violence are routinely confused: there really is a scene where a woman has all her clothes shot off, though this isn’t ‘really’ happening, it’s a sexual fantasy. I think. But whose?

Strangely, in spite of all the guns and gangsters, this is a film where women come out on top, in a sense. The violence gives Luce a new lease of life. Mysteriously and triumphantly regaining her youth, she becomes a muse again – a massacre’s muse, presiding over the bloodshed like what’s being splashed about all over the shop is only paint (which, as the visuals grow increasingly hallucinatory, is often the case).

This ‘hidden’ story, emerging from the imagery rather than the plot, almost makes up for the absence of characters you can easily identify with (or even just identify) and a plot you can follow like an arrow on the floor. So a film that felt like hard work at first, finally left me dazzled, or at least dazed – the hard work paid off. In Brawl, the opposite was the case – an easy watch left me uneasy. Uneasy in a good way though? I’m not sure. And that makes me uneasy.

Both these films glory in excessive violence, Brawl in a way that seems geared to providing unpretentious reactionary thrills and LTCT in a more luxuriously decadent way. It used to be that genre films that showed signs of intelligence were praised for being ‘subversive’. These days nobody even knows what the status quo is, let alone what might undermine it. Yet both these films are ‘subversive’ in a sense – LTCT of a traditional masculine perspective and Brawl of a PC worldview.

Yet both subvert their own subversions: the ‘feminist’ film fetishizes gunplay and the female body and the Trumptastic revenge drama has the chilly ambience of a psychotic fantasy. Uncertainty is all. Is this is a good review or a bad one? I can’t even tell you that.