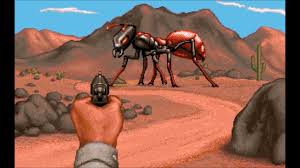 Forget New Year then – we return to Saturday 28th October 2017, to – specifically – the Pizza Express just off Soho Square, where Dave and I were deciding that, after all, we might have to forego the first film we had intended to see at the Frightfest Halloween one-day mini-festival, or risk indigestion.

The film was called Hostile and was (as I remember) a French post-apocalyptic zomcom set entirely in a skip. Something like that anyway.

This, then was our first film: Lawrie Brewster’s black-and-white pastichey little number that, if nothing else, looks absolutely gorgeous (cinematography by Michael Brewster and Gavin Robertson). Macarena Gómez plays a Mrs. Danvers-like figure, a ballet teacher standing guard over a traumatized ballerina (Briony Monroe) in an isolated mansion. Jamie Scott Gordon is the investigating psychologist attempting to exorcise the ballerina’s demons, and meeting resistance from the screechy Gómez, whose wild overacting forms a bizarre contrast to Gordon’s so-understated-it’s-barely-there performance.

With the basic dynamic consistently failing (although there is one nice scene with Gordon and Monroe) it might have been helpful to have a plot to fall back on – in the kind of 40’s Gothic melodrama this nods at, there would have been one. But writer Sarah Daly’s story, which involves a spectral ‘owlman’ who seems to be a manifestation of the god Moloch, is just a little bit incoherent.

‘Did you ever think of doing it without the dialogue?’, a guy asked in the Q&A, creating a slightly awkward moment, as if he’d said what everyone else had been thinking (he’d certainly said what I had been thinking). The most effective moments here are the ones where the visuals and the soundtrack (often so loud that it drowns out the dialogue anyway) do the work, as in the very intense sequence towards the end where the ballerina makes a far more striking Black Swan than Natalie Portman did. A more stylised approach in the Guy Maddin vein, complete with intertitles, might have saved this.

As it is, Dave, as we emerged from the screening, merely looked at me in bewilderment; and I had nothing.

IT CAME FROM THE DESERT

This was the one Dave was excited about, in inverse proportion to my own lack of enthusiasm. In the end, I was the more satisfied, having expected so little.

There is certainly nothing baffling here. Teens take a trip into the desert, come across an abandoned military facility in which giant mutant ants, spawned by a Cold War experiment, begin to stir. Ants attack; teens fight back. The tone is self-consciously light-hearted. This is the kind of film where somebody says, as the heroine makes her first appearance: ‘If this was a film, this scene would be in slow-motion.’ And the scene is in slow-motion.

ICFTD is based on a computer game from the 80’s, which in turn was inspired by 50’s monster movies. Not too surprisingly the nostalgia here stretches back no further than the ’80’s: our teenage hero is obsessed – perhaps ironically – with an ’80’s action movie hero called The Eradicator.

There’s a kind of knowing charm at work, although Dave was resistant to it. Amused as he was to see an ant drain a keg of beer, he wanted to see them destroy a city at the very least. In truth these bad CGI creations were too puny for that kind of job, not a patch on the ants in Them! (1954) or even (in my view) the ones from the videogame (which we get to see during the closing credits) primitive as they are. Though the makers do attempt to personalize the CGI ants at one stage by subtitling their twitterings. Which is kind of funny.

Quite a lot of the cast were present, mainly young actors but including comparative veteran Mark Arnold, who rather crushed his colleagues when they were asked to talk about recent or upcoming projects by saying that he’d been in the Kingsman sequel and Blade Runner 2049. ‘Well I’ve seen those’, offered the next in line.

Best of the bunch was Turkish director Can Evrenol’s follow-up to the impressive Baskin, which was a nightmarish story of cops investigating mysterious happenings that turns into something approximating metaphysical torture-porn. Housewife also splices childhood trauma with grisly arcane ritual, but pushes the boundaries, notably those between dream and reality, further, so that there comes a point where you really have to give up trying to make sense of this in any conventional way.

Our heroine Holly (Clémentine Poidatz), married to an author so egotistical that he keeps a life-size cardboard cut-out of himself in his study, falls under the spell of sinister-yet-charismatic cult leader Bruce (David Sakurai), who can seemingly access people’s minds.

In this way he manages to bring Holly some relief from her childhood trauma (her mad mother drowned her sister in the toilet when they were kids, then killed her father) only to cast doubt on the legitimacy of her memories, along with everything else she thought she knew, as her reality grows ever more untrustworthy.

Holly’s experiences have left her reluctant to have children – on some level, this might be about her overcoming her fears in this respect, since at the end she does have a child. However, it is, to say the least, no ordinary pregnancy – she gives birth only minutes after being impregnated (by Bruce, wearing her dead sister’s peeled-off face as a mask). It may be inferred that time is of the essence here since by this stage the apocalypse anticipated by Bruce’s cult has arrived, and tentacles are already emerging from the clouds. But a lot of things have to be inferred. Dave was bewildered all over again.

In fact, this may be no more coherent on the surface than The Black Gloves but it does manage to suggest that something is going on under the surface, it’s elegantly done and intriguing, and I certainly enjoyed it more than, say, Mother!, with which it shares some ideas around the creative process and birth. It’s main problem might be that it’s too short and collapses its various worlds into each other too rapidly, creating a bit of a pile-up at the end. But no doubt the real end of the world will come too soon for comfort as well.